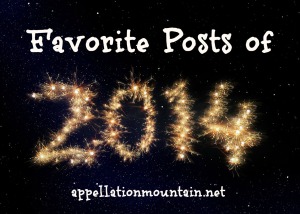 It’s the end of the year!

As I’ve slowly transitioned from blogging as a hobby to blogging as a job, I’ve found myself looking more and more at data.  In our age of instant, abundant data, it is easy to get lost in the numbers.

I’ve been looking at the most popular names on the site for years, as fuel for March Madness, our annual, basketball-free showdown between the names getting the most love here on AppMtn.

But until recently, I haven’t looked at the most popular posts or search terms.  And as I pulled them together, I thought it might be fun to share the results with you.

Ever wondered what the most popular searches are here?  Or which articles are most-read?  Read on, and all of your questions shall be answered …

The biggest topic that leads searchers to AppMtn?

Nicknames.  I’ve written about embracing nickname-rich names and skipping the formal name in favor of the short form.  And lots of people search for some variation of the nickname question and land here.  I can argue both sides – though I’m Camp Nickname-Rich myself.

An irrefutable fact: girls’ names generate far more traffic than boys’ names.  Parents probably struggle slightly more when naming their sons, but when it comes to thinking about names and reading about them, most of us are Team Pink.

This reflects the numbers – American parents use a wider variety of names for girls, and that’s not a new trend.  And yet, I do wonder if I fuel that by writing about more girls’ names than boys.  (I don’t have a count, but there’s no question in my mind that I do.)  So one of my 2015 resolutions is to add more boy name posts!

Here are the favorite baby name posts about girls’ names in 2014:

And the favorite posts about (mostly) boys’ names:

It’s so interesting to see which posts are most read – the old favorites, the new ideas.  I’ll definitely be looking at this list while thinking about what to write in 2015.

Please feel free to leave a comment if there’s anything you’d like to see on the site in the coming year!