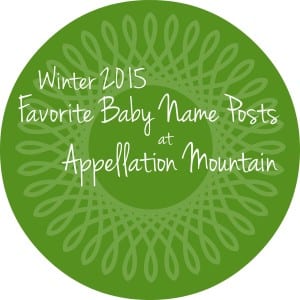 I love looking back at which posts were most popular in recent months. Sometimes there’s a hot topic or celebrity baby name to explain why a post catches on. Other times, it’s a mystery!

Either way, I thought you might enjoy the greatest hits at Appellation Mountain, too, and so here they are … the most popular posts for the first three months of 2015.

With March Madness baby names just wrapped up, I expected to see lots of the contenders in the top individual name posts. The influence was clear – but there were also quite a few surprises!

Lastly, this seems like the perfect moment to ask: what are some trends that have you curious lately? Types of names you’d love to learn more about? Burning questions you’d like to see answered? Please leave a comment!