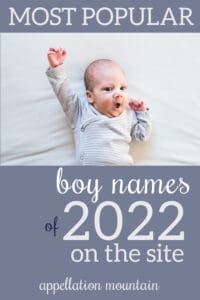 As ever, it’s the “on Appellation Mountain” part that matters here. This list consists of the most viewed Name of the Day posts on Appellation Mountain. So it won’t look like any other Most Popular list anywhere else … and it definitely doesn’t indicate what babies are being named in the real world, either.

But it does hint at names that intrigue expecting and future parents. And in many cases that will eventually translate into a measurable rise in popularity.

After all, before parents can choose a name for their child, they have to hear it somewhere. Some of the time, that means hearing it here.

Other names fare well because this is the site where Emrys gets as many words as James. Factor in the weirdness of the internet, and this list is inevitably eclectic.

So much so that the top name knocked me off my feet this year. Because, for the first time, ever, a time-tested classic holds the top spot.

A word name with a virtue vibe and a superhero tie-in, Arrow seemed like the Next Big Name a few years ago. It’s fallen in use since, but maybe interest is still high enough to keep this on the list of edgy, but familiar, possibilities.

A place name that sounds academic (think Rhodes scholar) and boasts a Marvel tie-in, too, thanks to Iron Man’s friend and fellow Avenger, James “Rhodey” Rhodes.

A recent favorite in the UK, Callum has gained in use on this side of the Atlantic in recent years.

The Spanish word for river, Rio blends the best of O-ending boy names with our love of nature.

A cozy nickname name with a heavy metal edge.

In some tellings, the wizard Merlin’s name was originally Emrys. That makes this Welsh import an intriguing choice for parents in love with tales of Camelot.

Zakai looks like a refresh to familiar favorite Zachary, but it’s actually a separate Hebrew name, found in the Old Testament.

A surname name made popular by the reboot of Walker, Texas Ranger now titled just Walker, currently in its third season.

Classic, regal Arthur spent many years in hibernation, but now it’s back.

It looks like an Evan-Alexander smoosh, but Evander is a separate name from Greek myth, with a strong meaning: good man.

A surname name that shares the popular TH sound of Theodore.

An Irish hero name import that balances the traditional and the modern.

A dragon from Turkic myth, Evren means “the universe” in Turkish.

Take Everett, make it a little more daring and outdoorsy, and you’ll arrive at Everest.

Buttoned-up and brief, Reid is a modern traditional.

Sometimes spelled Sinjin, St. John is a surname name that’s traditionally pronounced differently than the spelling. (Think of name like Sinclair – St. Clair – and it makes a little more sense.)

A little bit country, a little bit blue blazer, Brooks is the perfect compromise between so many styles.

Once an out-there flower child choice, River has become a favorite among parents for so many reasons.

A rock star name with a stylish sound.

This Danish import follows so many two-syllable, N-ending favorites that dominated popularity charts in the 2000s.

Zev means “wolf” in Hebrew, which makes this mini name with the high value Scrabble score even more appealing.

A successor to Ryan and Aidan, Ronan means “little seal.”

The French form of Julius, Jules is an unexpected possibility for a son – continental, cool, still traditional(ish).

A nickname for Henry or Harold, Hal’s profile was raised when Today host Jenna Bush Hager gave the nickname to her youngest. (His full name is Henry Harold Hager.)

Long a rare name in sparing use, Arlo’s big boost came from 2015 Disney-Pixar movie The Good Dinosaur. (It’s the name of the timid apatosaurus at the center of the story. The human? They call him Spot.)

Hayden meets the S ending we all love.

A name that points to the heavens, as well as the name of a flower, Cosmo got a boost when Scarlett Johansson announced it was the name of her son with husband Colin Jost.

Fiery Blaze is more popular than Blaise, but this spelling brings to mind the saintly historical figure rather than straight-up flame.

An s-ending surname that connotes good health and abundance.

Inspired by CS Lewis’ fictional prince, as well as the body of water that sits between Europe and Asia.

Bright and friendly surname name Jones has been overlooked for far too long.

A polished surname name that nods to the West.

A surname name with literary appeal, Archer also brings to mind arrows – and the accuracy and bravery of those who wield them.

Following the success of Top 100 Hawaiian name Kai, fellow nature name Koa is catching on, too.

The x-ending, the mythological ties, its place name status – no surprise Phoenix is rising.

A textbook example of a name Appellation Mountain readers loved that has slowly worked its way into the mainstream. And why not? That great middle X, the stylish -ley ending, potential nickname Huck – this one has it all!

Spelling Rafael has long been more popular, but Raphael seems to be rising in interest fast, a fresh alternative to classics like Theodore, as well as Biblical favorite like Gabriel.

A culture-spanning choice, Kai can claim European roots, or come from Hawaiian, where it means “sea.”

A Germanic name straight out of the history books, Otto feels antique and current at the same time.

Without a doubt, James is the most traditional name to ever top this list at Appellation Mountain! Does this mean that the Top Boy Names 2022 is closer to the popularity charts overall? Nah. Not with Emrys and St. John ranking. But it does suggest that interest in James is high … possibly because that S ending puts it in the same camp as stylish favorites like Brooks and Wells.

There you have it … the Top Boy Names 2022 on Appellation Mountain!

These names will be back in March to compete in the annual March Madness Baby Names tournament. Check out the last round of champions here. 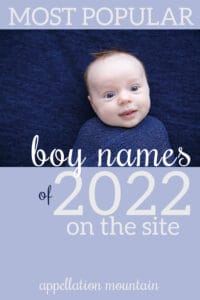 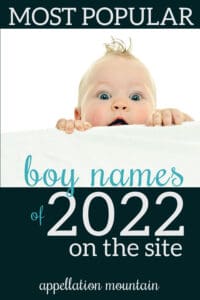