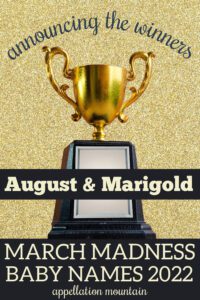 You’ve voted your way from a pair of sweet sixteens, all the way to the final match. And now the results are in!

Before we get to this year’s champions, let’s look back at where we started.

March Madness baby names pits the sixteen most-viewed name posts from the prior calendar year against each other. There’s one constraint: after Cora won back-to-back victories, we decided that all past victors were permanently retired. But other than that, the names that compete are as wild and varied as you might imagine.

On the boys’ side, August bested Hayes with over 76% of the vote. That’s a commanding win!

For the girls’ contest, Marigold narrowly nudged past Vera with almost 51% of the tally. Could that be the thinnest victory of any March Madness baby names final match? Possibly …

Hayes and Vera may return to fight another day. But for now, we add two additional names to our March Madness Baby Names all-time champions’ roster:

Of the dozen years’ of contests, this marks the fourth year the winning boys’ name has started with the letter A. For girls, three of the twelve victors are M names – and just as many are straight-up nature names, with an honorable mention for Sylvie, Wren, Leo, and maybe even Caspian.

It remains true that the boys’ names are slightly less surprising than the girls’ names – they tend to be more traditional, and more commonly used.

But overall, this list of names could be a jumping-off point for many families looking for a highly-edited selection of time-tested favorites.

Readers, what do you think of August and Marigold’s triumph in March Madness Baby Names 2022?