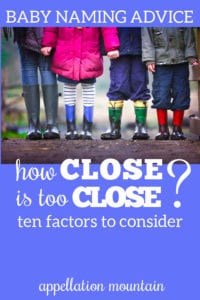 When we decided to call our daughter Clio, we forever closed the door on another favorite name – Theodore, nickname Theo.

For every family that decides Maya and Milo are too similar, another embraces the sound-alike names.

Or insists that Alicia and Alina are totally different names.

Some parents might never notice that Joanna and Jackson are both related to John.

Or maybe the first time Kelly introduces her daughter Grace, she suddenly realizes that the legendary Grace Kelly is echoed in their names.

Siblings’ names will be said together countless times. The names we like often have much in common.

So how can you tell if your choices make for a compatible set, or if they’re much too close?

There are no hard-and-fast rules, but here are ten factors to consider.

This can be a subtle way to link siblings’ names. Think Lucy and Claire. One means light; the other, clear. Felix and Asher both mean happy.

Sometimes the challenge comes when your family of two ends up a family of four or five or more. Your first two are the nicely paired Hazel and Ivy, but after using Olive and Jade, your choices for #5 narrow to Loden, Fern and Moss.

Name aficionados know that Jacob and James are related. A popular combination for twin girls is Isabella and Elizabeth – two forms of the same name, even if it’s not quite like choosing Mary Anne and Marianne.

Origins aside, Jack and Sean make for a compatible pair of brothers’ names. And Charles and Caroline seem different enough to be worn without incident.

Daniel and Danielle, however, feel too close.

8. You’ve neglected 25 letters of the alphabet.

Sometimes this is unintentional. You’re naming your sons after their grandfathers – Michael and Matthew. Or you just happen to like the names Julia and Jason.

But let’s say you choose a letter with fewer options.

I remember hearing about a family with four sons – Henry, Heath, Hugo and Hatrick. Are they hockey fans, or was Harvey not their style?

And if you’re on the second generation sharing the same syllable, your options might be very limited.

7. The names are linked in history or pop culture.

If the movie was a bust, or we’re talking minor comic book characters, this matters not at all.

(You can safely ignore “But Sami named her twins John and Alice on Days of Our Lives.”)

Some combinations might appeal because of their shared connections. Imagine daughters named for two Jane Austen heroines, as in Emma and Elinor.

Though, of course, it can happen after the fact – in which case, all you can do is laugh and promise that, no, the Twilight novels didn’t inspire you to name your children Jacob and Bella.

6. Your choices can lead to same nickname.

Sure, you never intend to call Kathryn or Katelyn by the nickname Katie. But it could easily happen. And how will their sister Annie feel about having an unrelated name?

Not every set of names that shares a nickname feels too close. Amelia and Marianna could both shorten to Mia. Alexander and Natasha might both go by Sasha.

The harder you have to think about it, the less it becomes a concern.

But sharing the same ending is another sign that your favorites might be too close for comfort.

Does one name fit neatly inside the other? Annika and Julian share an “an” but it isn’t glaringly obvious.

But Ella and Kellen seem like they’re part of the other.

In cases like Anna and Susanna, one sibling’s name is an elaboration of the other.

That can be a little too close.

With #10 through #4, it is easy enough to come up with examples that work, despite being close in some ways.

But #3 is tougher to navigate.

Yes, there have surely been twin sisters called Cara and Tara. But most parents – and siblings – would find it a bit too matched.

And yet, this is trickier than it sounds. Timothy and James, Jeffrey and Stephanie and, of course, Benjamin and Jennifer all end up rhyming if you use the most common diminutives.

1. A combination of the above.

Jackson and Jonathan are close, but probably on the right side of the line. Jack and John, though? That seems a little too close.

Jeffrey and Stephanie seem less troubling than the Hollywood power couple Benjamin and Jennifer – because the nicknames rhyme and we think of them as a matched pair.

Sarah and Laura are pretty close, but Laura and Maura feel like they cross a line.

What choices have you had to reject because they’re just too close to your an older child’s name? 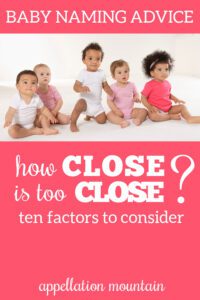