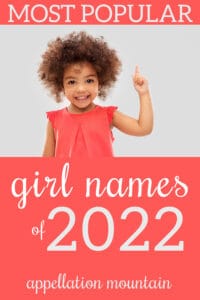 Ready for the Top Girl Names 2022 on Appellation Mountain?

It’s a quirky, compelling list. After all, these are the Top Girl Names 2022 on Appellation Mountain …. a site big enough to generate glorious piles of data; but small enough that readers really do influence the names that make it to the top.

Plus, this is the place that gives the same number of words to Cricket as to Isla. No surprise when they both make the Best Of list.

If you’re wondering why this list is so much longer than the 45 Top Boy Names for the year? That’s because more girls’ names are viewed. WAY more. So the 45th most viewed boys’ name receives about the same number of page views as the 75th most popular girls’ name.

A younger me would’ve ruthlessly edited both lists to a neat-and-tidy Top 25. But there are some gems waiting lower on both lists, so I decided to go with it.

While some of these names are probably looked up out of curiosity, others do show some real momentum. Names like Elowen are favorites across the naming community. Others, like Sylvie, were rare in the rankings even when they were fast favorites here at Appellation Mountain (and on other naming sites).

At least some of these are almost certainly headed for the US Top 1000 … eventually.

Others are already mainstream favorites, popular but still plenty intriguing.

A combination of so many lovely Lou names with that popular -ella ending.

Had Disney’s Strange World been a hit, Meridian might’ve had its moment. But since that hasn’t happened, this appealing word name with literary and musical ties might have to wait a little longer.

A favorite among name fans, it’s a cousin to popular Otto and Otis, but a little hard to say in American English where the Ts become Ds.

A mini name – and Isabella nickname – Isa could fit with Ava and Isla. But it’s also close to the Arabic translation for Jesus, which makes it potentially masculine, too.

A tailored name, often related to Mary and Maria – or other classic Mar- names for girls, Maren has rocketed up the popularity charts, boosted by country crossover artist Maren Morris.

Indie flick Juno was a surprise smash hit, launching the career of Elliot Page. The main character’s name, however, has remained rare – even while other June names and o-enders catch on. That makes this goddess name a good bet for parents after a stands-out/fits-in rarity.

A name that means dreamlike, Reverie’s sound and meaning fits with so many current trends.

Azure is the name of a shade of blue, and Azura is a twist that makes it even more name-like.

While Mirabelle is unranked, it’s the name of the heroine of smash hit 2021 Disney flick Encanto, Mirabel Madrigal.

It might be Arabic or Japanese, or even borrowed from an ancient goddess of the dawn. That just begins to list the possible meanings and origins of this versatile, international mini name.

A goddess responsible for the changing seasons, Persephone inevitably followed Penelope into wider use.

Willow was an edgy choice for Buffy the Vampire Slayer’s bewitching sidekick in the 1990s. Today it’s a favorite for our daughters, boosted by Willow Smith and our love of nature names.

A poetic possibility, inspired by Robert Burns’ “Sweet Afton,” an ode to a Scottish river. Often set to music, a recording by Nickel Creek in the year 2000 helped transform it to a girl’s name.

A classic, long stuck in style limbo, Frances is following Eleanor and Charlotte into wider use.

Dorothy and Theodora both rank in the current US Top 1000, but this cousin remains slightly less common.

If Harper and Atticus rank, why not Scout?

An import from Mexico, Xochitl comes from Nahuatl, the language of the Aztecs, as well as their descendants. It means flower. Pronunciation varies, but it sometimes sounds like Sochi, though often there’s an ‘eel’ sound at the end, too.

A chipper nickname for classics like Katherine and Christina, Cricket might just stand on its own, especially after Busy Philipps gave the name to her daughter in 2013.

A vintage gem, Vera might mean faith or truth depending on the origin you consult. Either way, it’s a brief, but unforgettable, choice.

Another Nahuatl import boosted by many Americans of Mexican descent, Citlali means star.

This term appears in the Old Testament Psalms. It’s generally translated as “pause.” While that makes it sound old school, Selah is very much a twenty-first century sensation.

The name of an ancient people conquered by the Romans, Sabine survives as a feminine given name. Some languages pronounce – and spell – it Sabina.

The Latin phrase ara caeli means “the altar in heaven.” It’s a title associated with the Virgin Mary, especially in Spanish-speaking countries. That’s how Araceli became a pretty possibility with spiritual meaning for our daughters.

The thirteenth century Persian poet – still widely read today – was male. But this name can be feminine in Japanese. Since Beyonce and Jay-Z named their younger daughter Rumi in 2017, it feels like a potential choice for a daughter in the US.

Lovely, traditional Susannah fails to crack the current US Top 1000 – with or without the final H.

A Polish nickname for Sophia, actor Zosia Mamet made it famous in the US.

A tree name that feels as wearable as vintage Mabel, with bonus points for parents with ties to Canada.

Dulcie means sweet. Spell it Dulce and it ranks #832 in the US. But Dulcie is the spelling on the Appellation Mountain post. And while Dulce might be pronounced with a ‘chay,’ Dulcie almost certainly ends in ‘see’ sound.

Molly is a long-time favorite. But despite the significant star power of icon Dolly Parton, this Dorothy nickname doesn’t appear in the US Top 1000.

A Welsh name borrowed from history, Gwendolyn feels both vintage and surprising timeless.

Thanks to vintage June and 70s chart-topper Jennifer, this nature name is a fresh favorite.

Stranger Things made this number potentially name-like, especially since it shares sounds with current favorite Evelyn.

A bird name that fits right in with Wren and Raven, Dove’s profile was raised by Disney Channel – and Descendants – alum Dove Cameron.

A Scandi classic made luminous by Hollywood icon Ingrid Bergman.

A name that surges in the search terms every Christmas season as we all re-watch 1946 Frank Capra classic It’s a Wonderful Life. Zuzu is the youngest Bailey child, a nickname for Susan.

A vintage nickname for longer choices like Euphemia, Effie feels Scottish, vintage, and perfectly accessible in our age of Sadie.

A Scottish import, Isla has rocketed into popularity over the last dozen years in the US. Credit actor Isla Fisher for putting her name on parents’ radar.

Dominant as a middle name for years, Marie is surprising rare – and appealing – as a first.

Raphael is a fast-rising favorite for our sons. This is one of several possible spellings for the feminine form. None of the make the current girls’ Top 1000 – yet.

Kim Kardashian’s eldest answers to this nickname, which is enough to spark ongoing interest – if not more children receiving the name.

The Finnish word for snow, though other origins are possible, including the Latin lumen – light.

A Theodora short form more popular than the original.

A surname name that might sound masculine, Palmer is more popular for our daughters. One possible reason: Brooklyn Decker’s character in 2011 rom com Just Go With It. (It sounds obscure, true, but the numbers match up.)

The Cornish word for elm tree, Elowen succeeds on sound, as well as meaning.

An elaborate floral option with Southern charm and lots of nickname options.

Traditional Cecilia benefits from a sparky Simon & Garfunkel song, as well as associations with the patron saint of musicians.

The French form of traditional Sylvia, it feels like a fresh update to that favorite, with the middle V adding plenty of style points.

A (mostly) synthetic surname name inspired by Lake, this name has been on the fringes for years, but has yet to really catch on.

The books-turned-Netflix series about Sherlock Holmes’ little sister made this name’s curious origin a virtue. Instead of Enola’s origins as alone, backwards, seeming isolated, the young heroine makes it a synonym for independent.

A preppy name made familiar in the 1980s, Sloane has slowly climbed to become a tailored, modern alternative to Joan for this generation.

The Italian word for jewel, and a slight twist on long-time top name Emma, too.

A sweet Margaret nickname with plenty of spirit.

Yet another Ella name, but one with intriguing meanings and origins, including shadow.

A vintage name with plenty of spirit.

Polly has long played second fiddle to Molly, even though they both started out as Mary nicknames. With P names from Penelope to Paisley to Promise in favor, this could be Polly’s moment.

A brief, breathy name that brings to mind fairies.

The evening star, a name that suggests the night sky, and, thanks to James Bond, international espionage.

A little bit Western, thanks to Annie Oakley, and also a bit of a tree name, thanks to Willow and Juniper.

The buoyant Elizabeth nickname kept in the headlines thanks to the late, great Betty White, and Taylor Swift’s song title/birth announcement for Blake Lively and Ryan Reynolds’ third child.

It looks like Noah, hold the H, but it’s actually a separate – and traditionally feminine – name from the Old Testament.

A color name boosted by that stylish middle V.

One of many spellings of the nicely international Lila.

Drop the ‘beth’ and Elizabeth is transformed from serious, regal, and saintly to spirited, adventurous, and still plenty traditional.

The bird name flying highest among a flock of pleasing possibilities at the moment.

Tessa is a favorite, but just Tess outranks its two-syllable cousin on the site.

A nature name, but also a word name suggesting regret, Zendaya’s character on HBO’s Euphoria has put this name on parents’ lists.

Years ago, I wrote a post titled James for a girl. That has become the #1 most-viewed post in the girls’ category this year. I suspect most parents are considering James as a middle name, rather than a first. But I also wouldn’t be surprised to see James rank in the girls’ Top 1000 again. Yes, again – because James appeared in the US girls’ Top 1000 every year from 1880 through 1989.

Many sharp-eyed readers suggested that might be the reason the traditional James was on top on the boys’ list, too, and that’s very possible. But there’s no question that, love it or hate it, classic James is also a white hot trend.

Any surprises on the list of Top Girl Names 2022? Do you have a favorite? 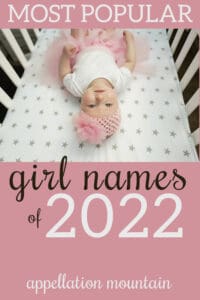 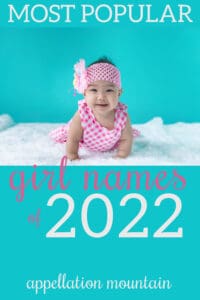