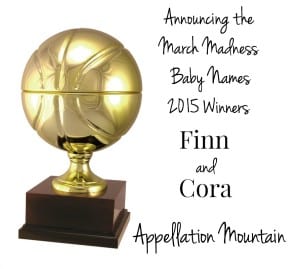 After four weeks of voting, and some very difficult decisions, you’ve chosen the winners of March Madness 2015!

Sometimes the matches see-saw back and forth. But this time? The outcomes were pretty clear from day one. Even though neither match was won by a landslide, both of the winners maintained a solid lead from day one.

On to the results!

In the boys’ match, defending champion Everett lost to challenger Finn! Finn has made it to March Madness year after year, but I don’t think he’s ever advanced to the final before. I’m glad that 2015 was his year.

If you’re wild for Finn but find him a little bit too brief, you might consider some of these longer names that lead to Finn as a nickname.

On to the girls, where defending champion Cora holds on to her crown for the second year. We’ve never had a repeat winner before, so I’m sort of charmed that it’s finally happened, even though I was rooting for Wren.

Cora crushed it, and gets to keep her place with fellow past winners Louisa, Genevieve, and Isla.

I recently wrote about all of the Cora names that could be catching on. I’m partial to Cordelia and Coraline, but there are lots of possibilities.

I couldn’t let March Madness go without one final poll!

As it became clear that both of the 2014 winners would advance to the 2015 final, a few readers suggested that maybe past winners should retire.

So it’s time to make a decision and stick with it, but I’d love your help.

Should I retire past winners, or should they be able to defend their titles? Because March Madness 2016 will be here before we know it!

Thank you so much for playing along with March Madness this month. You are the best of the best!