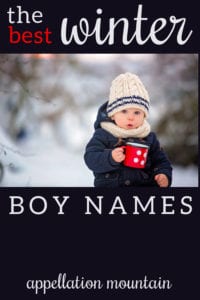 Looking for winter boy names? This list is for you!

Maybe you’re expecting a son in the wintry months, or maybe this is your favorite season. Either way, these names evoke the best of this time of year. Some are nature names with a clear link. Others feel more subtle, the kind of name that honors winter in a quiet way.

There’s a name for everyone on this list: current favorites, evergreen classics, and lots of new and never-heard possibilities, too. Many of them work at any time of the year. And while some feel best reserved for the middle spot, plenty of them are great first name options, too.

On to the winter boy names!

Harry Potter fans might know that Albus (as in Dumblebore) means white, from Latin. There’s a fourth-century British Saint Alban, and a historic town that bears his name just outside of London. Aubin is the name’s French cousin, with a sixth-century saint, with multiple places named in his honor. Either version of the name fits in neatly with so many two-syllable, ends-in-n names for boys, but neither ranks in the current US Top 1000 – though both may still be heard in France. The color ties it to the season.

In Greek myth, cold north wind Boreas brought winter. His daughter, Chione, served as goddess of snow. Aquilo is the Roman equivalent of Boreas. With that bright -o ending, and intriguing q sound, Aquilo seems like the more appealing of the two. It might also be related to the Latin aquila, meaning eagle, and shared by a constellation. It’s pretty much unknown as a given name, but with o-ending boy names so popular, Aquilo could fit right in.

Tree names are having a moment, with choices like Rowan and Willow on many parents’ lists. So how about Cypress? It’s an evergreen, which automatically ties it to the winter season. The Leyland Cypress is popular as a Christmas tree, too. That said, the Leyland is a hybrid, and the trees aren’t limited to cold weather climates; in fact, the Mediterranean cypress grows in the Middle East. But Cypress feels just seasonal enough to make this list.

We tend to reserve calendar names for girls – think of May and June, Summer and Autumn. But December sounds tailored-made for a boy, complete with cool built-in nickname Dex. It relates to the Latin word for ten, even though it’s now the twelfth month. In the northern hemisphere, winter begins on December 20th, and Christmas arrives on December 25th all the world over. That makes this name clearly seasonal and quite striking. Strictly speaking, it’s more common for girls – it was given to 35 girls in 2020, and fewer than five boys. But that’s so rare, it remains an equal opportunity choice.

We admire Colorado for so much natural beauty, and particularly for all things outdoorsy and wintry. Singer-songwriter John Denver puts this one in the same class as other musician surnames like Hendrix, Bowie, and Lennon. It originally comes from a surname, chosen to honor American politician Jim Denver. And while it ranks for both boys and girls, Denver seems perfectly masculine. It’s among the more mainstream winter boy names.

Unlike December or Frost, Douglas doesn’t immediately bring winter to mind. And yet, the Douglas fir stands as one of the most common varieties of Christmas tree in the US for more than a century. Originally a Scottish name meaning “dark river,” Douglas peaked in the 1950s, which makes it slightly dated today. But swashbuckling Hollywood legend Douglas Fairbanks keeps it dashing, and it could strike the right stands-out/fits-in vibe for a son born today – particularly if used in full. It’s also a strong, traditional middle to anchor a less expected first name pick.

Ebenezer seems like a non-starter, even though the central figure of A Christmas Carol star is so clearly tied to the season. But just Eben has possibilities. It’s rare, but in our age of Evan, Ethan, and all those Ben names, it doesn’t sound outlandish. Scrooge should tip others off to the pronunciation: it sounds like Evan with a ‘b’. Maybe this ties Eben to the holidays more than the entire winter season, but the story’s message of a fresh start and generosity resonates into the new year.

Many of the best winter boy names come straight from the forest. The Scottish surname feels nicely familiar. Because Fraser firs often serve as Christmas trees, the evergreen ties to the season. But the surname can be spelled Frasier and Frazier, too. Thanks to long-running television series Frasier, a spin-off of the equally long-running Cheers, Frasier Crane might make the -sier spelling most familiar, though none are very common.

Jack is much too much an everyman name to make the winter boy names list. But how about Frost? A younger, more mischievous take on Old Man Winter, Jack Frost has been with us since the 1800s, bringing snow and ice to the world in poems, songs, stories, and more. Sometimes he’s a sinister character; at other times, he’s playful, or even heroic. Frosty is a snowman, but Frost feels like a single-syllable name that could be great in the middle spot for a winter-born boy.

Another name tied to Christmas as much as winter, Gabriel has been a Top 100 favorite since the 1990s. The formal name feels grand and romantic, but nickname Gabe is friendly and down-to-earth. The angel makes appearances in the Old Testament and the Quran, but perhaps his most famous role is announcing the birth of Jesus in the New Testament.

Some consider Garnet an alternative to Scarlett and Ruby. Others think it sounds more like masculine favorite Garrett. In fact, it appears on both the winter girl names and winter boy names lists. Interestingly, it exists as a surname, too – with no connection to the gemstone. Instead, it referred to someone who made hinges. Or maybe it was whispered down the alley from a Norman French name. Either way, Garnet’s got roots deeper than you might guess. What ties it to winter? Easy. Garnet is January’s birthstone. Fun fact: the word may come from the fruit pomegranate, which is associated with the Greek myth of Persephone and the story of the seasons.

If Holly feels like a perfect winter girl name, then Hollis belongs on the boys’ list. Originally a surname for someone who lived near a grove of holly trees, today it fits right in with s-ending boy names like Miles, Ellis, and Brooks. It’s a common place name, too. Hollis, Queens was the birthplace of Run DMC, which inspired their single, “Christmas in Hollis.” Sherlock fans, note that the surname Holmes can also refer to holly trees.

Tradition tells us that three Wise Men visited Bethlehem, and many accounts give them the names Balthazar, Melchior, and Caspar or Gaspard or Jasper. There’s a lot of variation in that last one, but Jasper is by far the most popular of any possible Three Kings name for boys born today. It helps that Jasper also brings to mind a gemstone, typically green, sometimes red, and sometimes speckled. Bloodstone – green with red spots – is a cousin to jasper, and birthstone for the winter-ending month of March. Of course, the Wise Men didn’t arrive until Epiphany – January 6th – another reason to consider this less a Christmas-specific, and more a general winter name.

Kai often sounds summery. After all, it comes from the Hawaiian word for sea – all surfboards and white sand beaches, a sun-kissed nature name. Except that Kai also evolved as nickname for several formal names in German and Scandinavian languages. In fact, it’s the name given to the boy at the heart of Danish writer Hans Christian Anderson’s fairy tale “The Snow Queen.” The story has inspired dozens of adaptations, including smash-hit flick Frozen – though the Disney version traded friends Kai and Gerda for sisters Elsa and Anna. Still, call this one a name for all seasons, a culture-spanning choice that brings to mind the best of summer and winter alike.

Going North doesn’t necessarily bring cold and snow, but that’s the image it carries – which makes it an ideal winter name choice. Another reason to love North: the idea of “true north” refers to a navigational tool, but also means finding the right path, making this a subtle virtue name. Sure, it’s the name of Kim Kardashian and Kanye West’s eldest, but it remains very wearable, especially in the middle spot.

Pax comes from the Latin word for peace. While it’s not necessarily tied to the winter, it feels like a good choice for two reasons. First, all of those traditional carols wish for peace on Earth and goodwill towards men. But it also seems tied to hope for the new year. An auspicious choice, Pax fits with plenty of current trends – a virtue name, complete with the letter x. And while it’s gained in use, Pax remains nicely under-the-radar. Just 61 boys – and 7 girls – were named Pax in 2020. (Though unrelated surname Paxton is far more popular!)

Like so many winter boy names, Shepherd is borrowed from the Nativity story. The name feels gentle and capable at once. To shepherd is to guide, which makes this a modern virtue choice; it might also appeal to parents looking for a subtle Christian name. While it works for a child born during any season, there’s something about shepherds keeping watch under starry skies that seems tied to this time of year. It signals anticipation, as well as leadership.

Okay, Snowden could top this list except for the most famous bearer. Edward Snowden is known for leaking confidential government secrets. That’s a problem, and yet, Snowden has history well beyond the headlines. The Old English place name refers to a snowy hill. Snowden Crags is a major prehistoric archeological site in North Yorkshire. It’s also spelled Snowdon, as in the tallest mountain in Wales. And if you’re following The Crown, you might recall that Anthony Armstrong-Jones marries Princess Margaret, and becomes the Earl of Snowdon. A handsome, wintry surname, but perhaps better in the middle spot, at least for now.

Here’s a handsome possibility that feels tied to the winter season – and yet seems nicely subtle, too. Tannen comes from Tannenbaum, the German word for Christmas tree. But tannen also means pine in German. Since all things evergreen seem tied to winter, this feels like another strong possibility for a son born in the winter months.

Whitaker feels preppy and unexpected. Also spelled Whittaker, the surname name means “white field.” That’s an appropriate image for a wintry name. You may also see Whitacre, especially on the map, but figures like actor Forest Whitaker make the other -aker spellings feel like the default.

Most babies named Winter are girls; in 2020, there were 997 girls versus just 51 boys. And yet there’s no reason this name wouldn’t be handsome on a son. Making it masculine: The Winter Soldier, a 2014 Captain America movie about Steve Roger’s bestie, Bucky Barnes. He appears in other movies, too, often as the bad guy … against his will. Also, it brings to mind so many great -r ending names for boys, and fits right in with W surname names, like Weston and Wilder, too.

Yule might instantly make you think Brynner, the actor best remembered for his role in The King and I. But Brenner is Yul, hold the e, from a Russian form of Julius. Today Yule tends to refer to the Christmas season, but it comes from an Old Norse word, and originally referred to a series of feasts in midwinter, celebrated by the Anglo-Saxons. Some people born around this time took Yule as their surname, but today it might make a distinctive choice for a child’s name.

What are your favorite winter boy names? 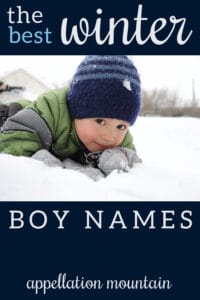 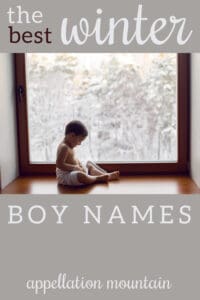