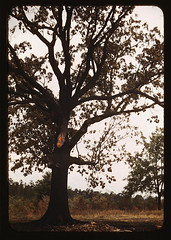 The week before Christmas is an evergreen moment, all holly boughs and Douglas firs. Maybe that’s why I’ve been thinking about trees and tree names this week.

Or maybe it is something less seasonal. Not every tree here seems like a wintry pick. And the positive virtues that we associate with trees – endurance, the beauty of the natural world – are timeless. Thanks to the list at North Carolina State University’s website on trees for inspiration.

Hands down, my favorite name on this list is Linden. I’ve imagined it as an update to Linda, but I like it for a boy equally well.

Alder – Adler is an eagle, but Alder goes in a slightly softer direction – a family of flowering shrubs and trees related to the birch.

Ash – Ashley is a fading favorite for girls, while Ashton rose to the Top 100 thanks to actor Ashton Kutcher. The Hebrew Asher is an up-and-comer now. But how about just Ash? A gender neutral option, Ash nods to both fire and the flowering plant.

Beech – The beach is a holiday destination, while the beech tree is known for its wood. Dash, Cash, Flynn, Beech … in the company of other modern choices, I think it works.

Birch – Like Beech, I think this one sounds better for a boy. The -ir sound brings to mind Curt and Kirk. The sound is abrupt, but the meaning is surprisingly pretty. Birch comes from a Germanic word meaning to gleam or to shine.

Burl – Not actually a tree, but a growth on a tree, burls are known for producing especially unusual and prized wood. Forever associated with singer – and the narrator of Christmas specials – Burl Ives.

Camellia – We think of the Camellia as a flower, but it actually grows on a small tree. The bloom is terribly pretty, right at home with Lily and Rose. Camille and Camilla have ancient roots. Camellia shares their sounds, but takes the name in a different direction. Another bonus? The nickname Milly.

Cedar – This name was the subject of a debate on the AppMtn Facebook page, with readers split on whether Cedar was better for a boy or a girl. The Lebanon Cedar is that country’s national symbol, and the tree had a long history of use in the ancient world. In the Epic of Gilgamesh, the hero travels to the Cedar Forest, the home of the gods in Mesopotamian mythology.

Cypress – A long-living tree, the roots of the name are not known. But Cypress has inspired place names from Canada to California, and Texas to Brooklyn.

Elm – Maybe not the most robust sound for a child’s name, but if you have an Elmer on your family tree, this just might be a way to reboot that name. Of course, A Nightmare on Elm Street – the franchise that has scared teenagers for three decades and counting – might give parents pause.

Forrest – Can’t decide on just one tree? Choose ’em all …

Hickory – I wouldn’t have considered Hickory as a given name, but Isadora made a compelling case for his use.

Holly – She ranked in the US Top 100 from the 1970s into the 1990s. Today there’s a hint of mom name about her, but she’s still a seasonal appellation with a certain amount of style. Credit Audrey Hepburn in Breakfast at Tiffany’s for some of that residual chic – though the character was born Lula Mae and re-named herself Holiday Golightly.

Juniper – A big favorite in name circles, she’s a successor to Jennifer and Heather, too, and it just so happens, the first-ever Baby Name of the Day profiled at AppMtn. Juniper is fresh, kicky, and yet has roots that go far deeper than some modern nature names.

Lilac – Colorful, botanical, and spelled with two Ls, what’s not to love about Lilac?

Linden – A favorite of mine, boosted by one possible meaning of the name – flexible, related to the Latin lentus, though the more common meaning is lime tree. (Lindens don’t grow limes … ah, the vagaries of language.) Linden has a long history of use as a surname and place name, too.

Magnolia – She’s a tremendously pretty choice, a botanical name with more heft than Lily, but lighter than Margaret.

Maple – If Mabel is a girl’s name, and others on this list are perfectly wearable, maybe Maple has possibilities, too. She’s also a nod towards Canada. I’ve already heard of this one used in the middle spot, where it really does make for a charming surprise.

Mimosa – If not for the whole champagne/orange juice angle, Mimosa might be seriously considered more often.

Oak – A mighty tree, associated with the Norse god Thor, and serving as the national tree of more than a dozen nations, including the United States. Surname Oakley has been heard, too – possibly inspired by Annie Oakley, one of the many places called Oakley, or hey, maybe even the sunglasses manufacturer …

Peach – We’ve explored this idea before, and there’s definitely some hesitation to name a daughter Peach. But calling her Georgia with the nickname Peach? That’s just genius.

Sequoia – A tree name, yes, but also an admirable Native American hero name, one that remains wearable for a son despite his -ia ending. He leans westward, and stands tall.

Willow – Already well established thanks to a television witch and a second-generation Hollywood star, Willow combines a vibrant sound with a softer image.

Are there trees that I’ve missed? Would you use a nature name for a child in the first spot? How ’bout in the middle?