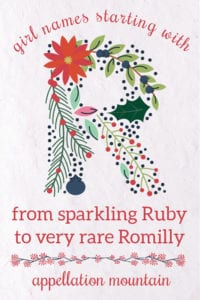 Girl names starting with R range from the trendiest – like Ryleigh and Raelynn – to the most enduring – think Rachel and Rose.

It’s an interesting mix. For a letter that really only makes one sound, girl names starting with R feel like an eclectic bunch.

They’re plentiful, too. R comes in as the ninth most popular letter for girl names in the US as of 2019. That’s far behind everybody-loves-A names, but well ahead of the relatively rare F names and W names, as well as the barely-there Q, X, and U choices.

Rose names, of course, make up a big chunk of this category, with everything from spare Rose to elaborate Rosamund.

But the most popular of the girl names starting with R? It has to be Riley. Check out the Most Popular list, where three of the ten names are some spelling of this upbeat surname pick.

Read on for all of the girl names starting with R!

An upbeat Irish and English surname name, Riley rose throughout the English-speaking world for boys and girls alike in the 1990s. But ever since Disney-Pixar’s 2015 Inside Out gave the name to an 11 year old girl, it’s risen even more rapidly for our daughters.

Another spelling of Riley, nearly as popular as the original.

Regan is one of Lear’s disloyal daughters in Shakespeare’s tragedy. It’s also the name of the girl at the heart of 1973 horror classic The Exorcist. But the spelling preferred by parents echoes the spelling of 40th US president Ronald Reagan.

A compound name, plenty of Rae-Lynn combinations have been heard over the years. But this one has skyrocketed thanks to country singer RaeLynn. She got her start on The Voice in 2012.

An elegant, enduring classic, ecovintage Rose has too long been tucked in the middle spot. A former Top 100 – and even Top 20 – favorite, Rose may be headed back to the top of the charts.

Yet another re-spelling of Riley. Rylie also appears in the US Top 1000.

Remy started out as a French masculine name. Remember Disney-Pixar’s Ratatouille? This is the name of the gourmet rat. But Remi might also claim roots in Japanese or Hebrew, Nordic languages or African ones. Today it’s a fast-rising, unisex favorite in the US.

Ever since Laura Jeanne Reese Witherspoon drooped her first two names and became a Hollywood A-lister, parents have been considering this trim surname name for their daughters. It helps that Patrice, Clarice, and other feminine names ending with -ice share the sound.

A Top 100 favorite from the late 1960s through 2010, it’s easy to dismiss Rachel as a trendy, Friends-era favorite. But Old Testament Rachel properly longs with the classics.

A feminine form of Raymond via the Spanish Ramon, this dramatic name is finally on the upswing again.

A Spanish spin on Rachel, Raquel surged in the 1970s as actor Raquel Welch became a household name.

The Latin word for queen, Regina is often given in honor of the Virgin Mary.

Along with Raina and Rayna, this name is one-part the Spanish word for queen, a companion to Regina. But it’s also related to nature name Rain and, especially with spellings like Rayna, might simply be a creative twist on former favorites like Dana and Jayna.

A Titan in Greek mythology, Rhea was the mother of Zeus himself.

The modern Hebrew form of Rebecca, Rivka is boosted by that sharp middle V.

An Italian feminine name, possibly related to the city of Rome.

Vintage and accomplished, Old Testament Ruth feels like a strong classic for a daughter.

A bird name made famous by Edgar Allan Poe’s enduring poem. Raven remains far more familiar for girls, but is heard in small numbers for boys, too.

Reese with a V, familiar to some thanks to writer Reeve Lindbergh.

To reign is to rule, so Reign fits right in with Royal and King.

Remi and Remy are rising; so is Remington. Maybe it’s just parents seeking a familiar Rem – surname, possibly it comes from fans of 1980s series Remington Steele, or maybe it’s a nod to the gun manufacturer.

A peaceful nature name, River rose first for boys, thanks to the tragic death of actor River Phoenix. But it’s been gaining for girls in recent years, too, fueled by characters on sci fi mainstays like Firefly and Doctor Who.

Robin is a bird name, true, but it’s also a medieval-era nickname for Robert. That makes it feel inevitably unisex.

A surname name borrowed from place names in Norman England, Romilly might be related to Romulus. But it sounds like a Rose-Milly mash-up, too.

An Irish boys’ name meaning red king, Rory has slowly become an option for girls, too. Credit to the Gilmore Girls for making it feel mainstream.

Another surname name associated with the color red, Rowan has been used in boys and girls for similar numbers. One early feminine use of the name? Anne Rice’s Mayfair Witches series.

Well-established as a name for a boy, Ryan has been steadily used in small numbers for girls, too. The same is true for invented name Rylan.

A romance language spin on Rose.

Many Rose names aren’t flower names originally. They come from the Germanic hros – horse. But Rosalind is associated with the Latin phrase rosa linda – beautiful rose.

A slimmed down version of Rosalind.

A long-time Rose-Anna mash-up, Rosanna featured in a hit 1980s pop song for Toto … but has since gone the way of shoulder pads. For now.

A literary rarity from the 1600s, Rosaura means “golden rose.” This time, the name does come directly from Latin

A Rose-Mary smoosh, or a borrowing from the herb.

A Germanic Ros- name that’s nearly unknown today, but kept wearable thanks to our love of Rose names.

A feminine form of Rafael and Raphael, boosted by the dramatic sound and -ella ending.

A romantic Italian city name that falls somewhere between Raven and Makenna.

A daydream, or a word name that picks up on the sounds of popular Avery and Everly.

Fleetwood Mac’s haunting 1975 song made this name from Welsh legend familiar – but not necessarily common.

A New Testament name, Rhoda brings to mind 1970s television character Rhoda Morgenstern. But the name actually had its heyday in the late 1800s.

A sometimes-place name with an intriguing, even scandalous, backstory.

Inspired by the heroic Ellen Ripley of Alien fame.

An ancient name meaning dawn, Roxana – and Roxanne – have faded in recent decades.

The name of a sixteenth century Turkish sultana, this elaborate name could fit right in with Isabella and Alexandra.

Borrowed from the poet, and the name of Beyonce and Jay-Z’s younger daughter, Rumi fits somewhere between Ruby and Remi.

What are your favorite girl names starting with R? What would you add to this list? 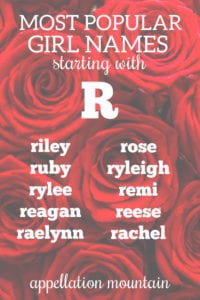 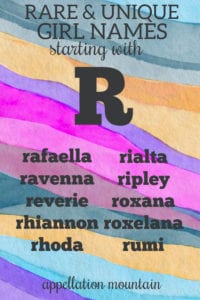