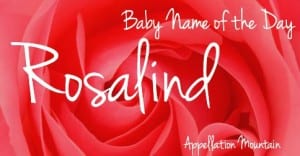 Before Romeo met Juliet, his heart belonged to her.

Thanks to Kathleen, Elizabeth, and so many others for suggesting Rosalind as our Baby Name of the Day.

Rosalind: Not Quite Romeo’s First Love

Actually, I remembered it wrong. Romeo was in love with Rosaline.

That’s the thing with Rose names. For all of Rose’s simple elegance, there’s an entire garden of names that start with Ros-.

Not all of them had anything to do with the flower, at least not at first. The Germanic hros referred to a horse, and was a common element in girls’ given names, including Rosamund and Rosalind. The -lind meant gentle.

Then along came Latin, and the assumed meanings of the names changed. Rosamund became Rosamonde – rose of the world. And Rosalind? Latin gives us rosa linda – beautiful rose.

The Bard used Rosaline for Romeo’s crush, but Rosalind became his heroine in As You Like It, written in 1599, some time after Romeo and Juliet. She’s a thoroughly admirable character – loyal, smart, and quite capable, even when confronted with considerable adversity.

A few decades earlier, Edmund Spenser made Rosalind the great love of the shepherd, Colin, in his 1579 work, The Shepeardes Calendar.

Spenser invented oodles of names, but it’s not clear if this was yet another of the poet’s creations, or if the name existed prior to 1579. Rosamund is definitely much older, worn by a Lombard queen back in the sixth century. The name experienced a quiet revival in the nineteenth century, and entered the US Top 1000 in 1889.

A handful of famous bearers wore the name in the twentieth century, including actress Rosalind Russell. She won a Tony Award and multiple Golden Globes. Russell was nominated for four Best Actress Oscars between 1942 and 1958.

That tracks pretty closely with Rosalind’s most popular days. In 1942, the name reached #292 in the US.

A few other famous bearers include a trio of singers: 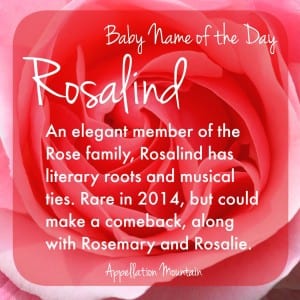 And why not? Many of the Rose names are having a moment:

And, of course, names ending in the -lyn sound are huge, from Evelyn to Madeline – choose your spelling. (Madelyn is actually the most popular in the US right now.)

Rosalind remains rare, but it’s an interesting possibility. Rosie is an adorable nickname, one that we’re sure to hear more of in the coming years. Lindie/Lindy works, too. It’s an elegant name, feminine and elaborate, but not frilly.

If you’re drawn to names like Annabelle and Lillian, but want something far more rare, Rosalind is one to consider.

What’s your favorite Rose name? Do you think Rosalind will make a comeback?