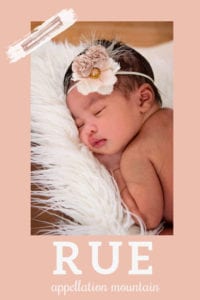 The baby name Rue is borrowed from a plant. But layers of meaning attach to this minimalist nature name.

Thanks to Leesa for suggesting our Baby Name of the Day.

It presents many a contradiction.

While it’s used in small amounts in some traditional cuisines and herbal medicine, rue can also be poisonous.

It’s associated with witchcraft. But it’s also known as the “herb of grace,” because Catholic priests used to use it for sprinkling holy water.

Some cultures associate it with weddings. Shakespeare mentions it often.

But the most common association with rue is the bitter taste of the leaves.

That bitter taste isn’t related to the verb rue, though.

Instead, “to rue” means to feel regret or sorrow. It comes from an Old English word, and now we can rue the day, or feel rueful.

“Let No Man Steal Your Thyme,” an old English folk song, plays on this double meaning.

But that’s only one aspect of the baby name Rue.

And while you wouldn’t name your baby Avenue, there’s something appealing about Rue. It’s a distant cousin to Journey.

You might sometimes hear it as a surname, originally given to someone who lived near a busy thoroughfare.

For years, there was only one Rue: actor McClanahan.

McClanahan’s long career began in the 1950s, but most probably known her as the very southern Blanche Devereaux on 1980s favorite Golden Girls.

Readers of The Hunger Games may hear the baby name Rue differently.

Suzanne Collins chose nature names for many of her characters in the dystopian novel, a world where a lottery sends young people to fight to the death for others’ amusement.

The series’ hero, Katniss Everdeen is just 16 in the first book. But she meets an even younger contestant, 12 year old Rue. Rue helps Katniss survive, and they become true friends.

While Rue doesn’t have a happy ending – it is The Hunger Games – the character is mentioned throughout the series, an example of true goodness.

The baby name Rue is used in small numbers throughout the twentieth century in the US. Perhaps that’s because Rue is sometimes a surname, and many last names occasionally appear as firsts. It might also be considered a short form of Ruth, which might explain some use, too.

But there’s a spike in the baby name Rue’s use in 2012. The Hunger Games was published in 2008, with a movie version following in March of … you guessed it, 2012. A young Amandla Stenberg played the role, earning a Teen Choice Award and much critical acclaim.

As of 2019, that number stood at 41 births, even as the The Hunger Games fades from the popular imagination.

But another dark drama could put the baby name Rue on track for even greater exposure.

HBO’s Euphoria stars Zendaya as Rue Bennett. The show deals with drug addiction – Rue’s – as well as pain and dysfunction of every stripe.

The first season debuted on HBO in June of 2019. It really picked up momentum during awards season. Zendaya won the 2020 Primetime Emmy for Outstanding Lead Actress in a Drama Series. A second season is on the way.

The name feels appropriate for her character: we hope she’s on a journey that leads somewhere positive, but the associations with regret and bitterness are inescapable, too.

Of course, the baby name Rue sounds like the adorable Roo. (Think of Kanga’s kiddo in Winnie the Pooh.)

And the French roux – a culinary technique used for thickening sauces – is occasionally heard as a given name, too.

But despite the character’s trials, the baby name Rue could catch on.

First, Euphoria seems high-profile enough that expectant parents are watching. And we all know how that other HBO series launched Khaleesi.

But Rue checks lots of boxes on its own. It’s a nature name, less recognizable than Lily or River, but still clearly drawn from the world around us. And it’s a modern, minimalist choice. Spare Rue feels distinctive compared to classic Jane or Claire, and slightly more feminine than surnames like Quinn and Sloane. Plus, we love the ‘oo’ of Ruby and Luna, which Rue shares.

Overall, it’s easy to imagine the baby name Rue overcoming a negative association in favor of the heroic Hunger Games figure and the fascinating, if destructive, one on Euphoria. Spare and simple in sound, but complex and layered in origin and meaning? Rue could be the new Sage.

Would you consider the baby name Rue for a daughter? 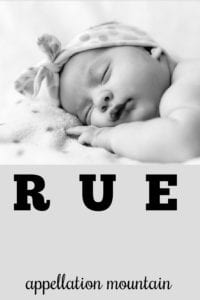