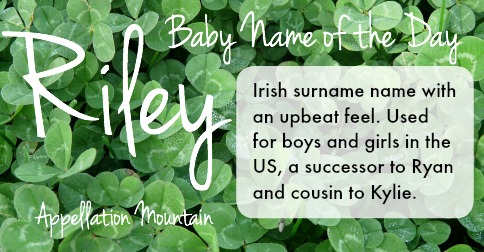 It’s the name that dominated the NBA play-offs, and the star of the newest Disney-Pixar flick.

Our Baby Name of the Day is Riley.

There’s something about Irish names. Liam, Owen, Declan. They’re friendly and cheerful. It’s not just given names, either. Brennan, Brady, Quinn. Upbeat and approachable, but still serious enough to be, say, your neurosurgeon or newest hire.

Riley has those same qualities.

It comes from a Gaelic given name – Raghailleach or Roghallach – which became the surname Ó Raghailligh. History dead-ends there, without revealing a source.

Or it could be an Old English place name, meaning rye meadow. He favored lines like the ripest peach is highest on the tree. You can imagine them on Instagram today.

In 1885, he wrote Little Orphant Annie, which became a comic strip, a hit musical, and more than one big screen blockbuster. (His Annie was a household servant. Daddy Warbucks came later.)

The poet’s depictions of cozy domesticity may have inspired the phrase “living the life of Riley.”

Or possibly, it’s back to Ireland again. The Reilly family was so powerful in County Cavan that they minted their own money. The surname became associated with wealth.

In 1919, popular songwriter Harry Pease used the phrase “life of Reilly” in a popular song.

But we know the phrase today thanks to a long-running 1940s radio program turned 1950s hit television series, with a movie adaptation thrown it for good measure.

Chester A. Riley was a dreamer and a bit of a blunderer, the forerunner of memorable characters like Ralph Kramden and Archie Bunker. But he was also a lovable, big-hearted kind of guy, and while his family never quite achieved the good life, they all ended happily.

In 2009, I called this name controversial. Why?

Because while Riley has always ranked in the boys’ Top 1000 in the US, it has increasingly been favored for girls. Even though you’ll still find plenty of boys with the name, the idea of boys’ names for girls can be a touchy subject.

Let’s take a quick look at the numbers:

The numbers give this one to the girls, maybe thanks to names like Kylie. Though Riley also feels like an update to the masculine Ryan. And while that’s over 4,700 girls, it’s also almost 2,500 boys.

Rylan and Rylen are also catching on in 2014. 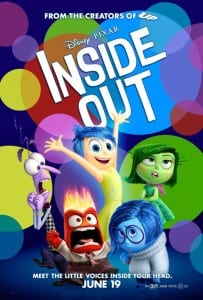 June 2015 was the month of Riley as a headline-grabbing girls’ name.

First there’s the Golden State Warriors’ Steph Curry. Curry brought his daughter to press conferences as the Warriors advanced through the NBA playoffs, and little Riley Curry stole the scene. She was born in 2012.

Then there’s the new Disney Pixar flick, Inside Out. The stars of the show are the emotions inside of Riley’s head. The animated girl would have been born around 2004 – again, a pitch perfect choice.

Do you like Riley better for a boy or a girl? Do you think this name has staying power, or will fade quickly?