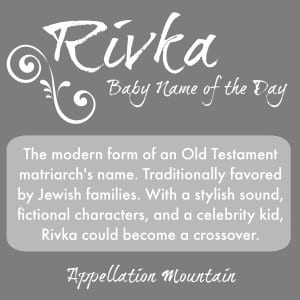 Here’s a new debut to the US Top 1000 that feels surprising and fresh, but has history galore.

Our Baby Name of the Day is Rivka.

But this is no novelty. Rivka is the modern Israeli form of the Hebrew name we know as Rebecca or Rebekah.

All forms of the name come from the Hebrew ribhqeh. I’ve heard the meaning given as “to tie,” but also ” to connect.” There’s something rather lovely about the idea of connection as a name meaning.

Over the years, her name was whispered from its original form to Rebekah or Rebecca.

In the Old Testament, she’s the wife of Isaac. It wasn’t a love match. Isaac’s family was living in Canaan, but Abraham was from elsewhere. Abraham dispatched a retainer to his hometown, bearing gifts, to find a worthy bride for his son. Abraham’s retainer devised a test to find a kind and just woman. Rivka was successful.

She and Isaac were the parents of the feuding twins, Esau and Jacob. The strife between the brothers was foretold in a prophecy when Rivka was pregnant. 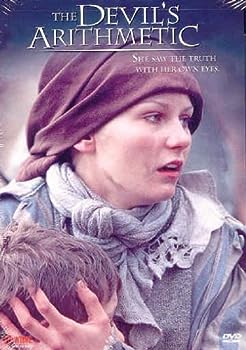 A handful of characters have answered to this name.

In 1988’s The Devil’s Arithmetic by Jane Yolen, Hannah is a girl in 1980s New York, transported back to 1940s Poland. She’s Jewish, and ends up in a prison camp, with all the suffering you’d expect. Hannah’s best friend in the camp is a girl named Rivka. It became a made-for-television movie in 1999, with Kirsten Dunst as Hannah and Brittany Murphy as her BFF.

There’s also Karen Hesse’s historical 1992 novel Letters from Rifka – yet another spelling. It’s the tale of a Jewish family leaving Russia, ultimately to settle in the US in 1919. It’s based on the accounts of Hesse’s great-aunt, Lucille. Letters from Rifka scored quite a few awards.

In 2012, director Guy Ritchie and model Jacqui Ainsley welcomed a daughter, their second child together. Guy is also the father of two children with his ex-wife, Madonna.

Guy must have a thing for alliteration. He and Madonna named their first son Rocco. Their second son, David, was adopted as a toddler. Then Guy and Jacqui welcomed Rafael and Rivka. (The couple recently welcomed a third child, another girl, but has never released her name.)

Could a relatively low-key celebrity couple make that much of a difference?

I have my doubts.

Looking at the numbers, it’s clear that Rivka has been gaining steadily since the 1950s, with a big boost in the 1990s, possibly thanks to the fictional characters.

It’s also fair to say that Rivka is used much more commonly by Jewish families. Are we seeing a microtrend with the rise of Rivka? Possibly. Is Guy Ritchie Jewish? No – at least, not really, though his oldest son with Madonna, Rocco, celebrated his bar mitzvah in 2013.

Or is Rivka the kind of name that’s ready for the mainstream?

I’d bet on the latter. We love a good Old Testament name and a name with ‘v’ in the middle. It’s just familiar enough to a non-religious audience that Rivka could catch on.

What do you think of Rivka? Is this name wearable for families without Jewish heritage?