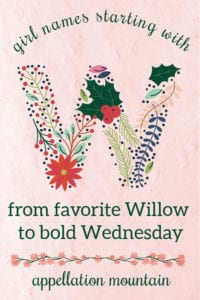 As initials go, it hovers near the bottom of the popularity list. Only Y, X, Q, and U are less often chosen for our daughters’ names.

And yet, girl names starting with W abound. Think of surname names that would wear every bit as well as Avery or Harper. And rarities include everything from vintage gems to well-why-not words to favorite fictional characters.

W girl names stand out just a little, but that’s a good thing.

A lovely nature name, borrowed from the graceful Willow tree.

A feminine form of William, far more streamlined than Wilhelmina.

The highest flying of the bird names for girls.

A twist on popular Winter.

A surname name that sounds like the ocean, even if it refers to a meadow.

A vintage nickname with plenty of charm, Winnie could be short for lots of formal names – but is more popular than many of them.

Two-parts Wren, one-part surname name in the key of Ashley and Hailey.

A surname name boosted by an actor and a singer, Whitney was part of the Ashley-Courtney wave, paving the way for so many favorites today.

A cousin to Whitney, now following names like Hadley and Kinsley into wider use.

Made famous – or infamous – by Bessie Wallis Warfield Simpson, otherwise known as “the woman he loved.” King Edward VIII abdicated the throne to marry her. While Wallis is simply an alternate spelling of surname Wallace, the headlines made us think of this as an acceptable feminine form.

A fast-rising favorite for our sons, Wells suggests health, prosperity, and a hopeful future. Those qualities would be equally appropriate for a daughter. It’s rising in use for girls, but the numbers remain small

We love Weston for our sons. Could Westerly be an intriguing feminine form? It sounds a little storybook, bringing to mind the western wind and the Wild West.

A polished, preppy surname name with irresistible nickname Whit, Whitaker is used in small numbers for boys – and even smaller numbers for girls. It’s fresher than Harper, less expected than Whitney.

Another fast-rising favorite for boys, Wilder could work for a girl as well. After all, the outdoors and all sorts of adventure are equal opportunity.

Willoughby is just plain fun to say. It picks up on popular Willow, but takes it in a surname direction. It does, indeed, mean “farm by the willows.”

Oprah’s surname likely traces its roots to Winfred – friend of peace. It influenced our spelling of Winifred, too.

A Hollywood surname name with an appealing sound, equal parts substantial and whimsical.

An o-ending surname in the key of Harlow.

Rey is a Jedi hero. But Wray? If you know your classic Hollywood, it brings to mind Fay Wray, the actor King Kong carried to the top of the Empire State Building. Originally an English place name, it’s an intriguing option, but maybe better in the middle spot.

The Scarlet Witch leapt from the comic book to the big screen as one of The Avengers. And then she starred in her own 2021 series, WandaVision, on Disney+. The name remains rare, but it’s no longer unfamiliar. wi

The name of the Addams Family’s only daughter, chosen because “Wednesday’s child is full of woe.” Despite that vaguely macabre image, Wednesday feels like a logical choice in our age of Summer and January.

JM Barrie’s level-headed hero, Wendy Darling’s name came from fwendy – a baby-talk way of saying friend. It could also be short for Gwendolyn.

Among the boldest of the pan-botanical names, Cameron Diaz used it as a middle for daughter Raddix.

Willa is white-hot, but Wilma? This name is back in Bedrock with Fred and Barney. At least for now. A German short form of Wilhelmina big in the 1920s and 30s, it’s easy to imagine Wilma staging a comeback – eventually.

Long and elaborate, this German feminine form of William – via Wilhelm – is instantly recognized, but seldom heard. One familiar use: modeling agency Wilhelmina, founded by 1960s model Wilhelmina Cooper.

An antique that’s ready to shake the dust off, Winifred boasts popular nickname Winnie, and a tailored sound.

Winsome means charming and light-hearted. It’s not a terribly serious name, but it’s a very happy one.

A lovely nature name, seldom heard but certainly as wearable as Azalea.

From the Old English wrenna – the source of our word wren.

From the Welsh word for fair or blessed, Wynne sounds triumphant.

What are your favorite girl names starting with W? 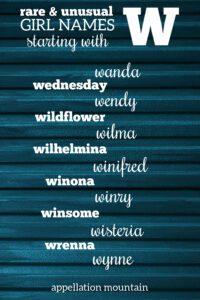 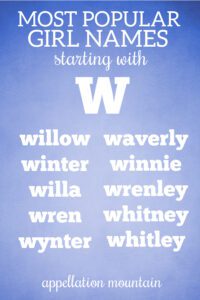 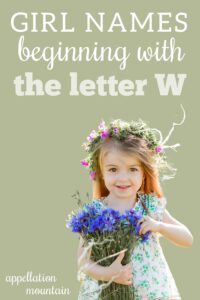