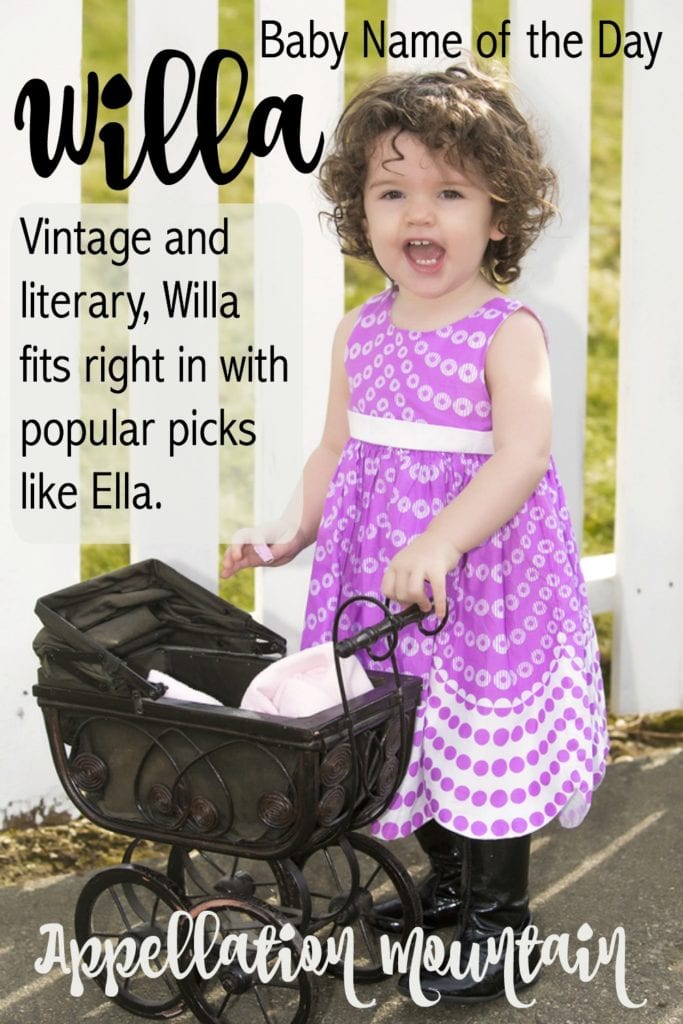 Willa is a vintage name that’s long been out favor – but is back in a big way.

Thanks to Aliciamae for suggesting our Baby Name of the Day.

Willa: On the Rise

Then Willa started to plummet, and by the 1970s and 80s, only two or three dozen girls were given the name every year.

Of course, it’s simply a feminine form of the evergreen William.

So is Wilhelmina, which is closer to the original Germanic Willahelm.

Evergreen William has been worn by plenty of notables. Wilhelmina also has a regal pedigree, and Dutch model Wilhelmina Cooper founded a modeling agency which still bears her name.

But Wilhelmina is out of the spotlight today, along with boyish Billie.

Like Top Ten favorites Emma and Harper, this name is effortlessly – and obviously – literary.

Cather taught English and wrote for women’s magazines before her novels became successful. They were best sellers, and a success with literary critics. They were also groundbreaking – at the time, no one wrote about the lives of immigrants, or life in places like Nebraska.

The name’s comeback started in the early twentieth century.

Some credit goes to brother William’s popularity, as well as our affection for names like Ella and Stella.

Then pop culture gave us:

The name’s rise coincides neatly with these events – a modest bump from Ford’s early success, and a big leap following the 2011 birth of Keri’s high profile daughter.

The question now is how high will this name climb?

It fits right in with other popular choices for girls – two-syllable, ends-in-a names from traditional Emma to modern Luna. It’s very close to favorites like Ella and Stella, as well as nature name Willow. And it fits in with Nora, Cora, Vera, and more vintage picks that seem likely to keep rising in the near future.

If you’re after a vintage name with a gentle vibe that’s nicely under-the-radar, Willa is one to consider – but also one to watch, because it might just be the next big thing.

What do you think of this name? Do you think Willa will be a Top 100 name any time soon?