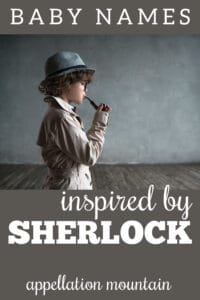 It’s not quite like Harry Potter or Game of Thrones. Even Downton Abbey feels like more likely inspiration.

But the world of Sherlock Holmes is vast, and the character names range from the classic to the distinctive.

They’ve been re-invented and re-told across the ages. At one point, Robert Downey Jr., Jonny Lee Miller, and Benedict Cumberbatch all played the legendary detective during the same decade.

Some of those stories have expanded on the original Holmes family, including the recent books-turned-Netflix movies centered on little sister Enola.

So if you’re a fan of the stories, maybe you’d like to name your child accordingly? These Sherlock Holmes names are nicely British, and connected to the series in a way that a fan might recognize. (Or not. Many are quite subtle!)

A NOTE ABOUT SHERLOCK

Before he was officially known to the world as the Great Detective, Sherlock Holmes, Sir Arthur Conan Doyle toyed with the name Sherrinford Hope. Or possibly Sherringford.

The name Sherrinford surfaces in various in-world spin-offs, like the BBC’s Sherlock, but not necessarily as a character name. Instead, it’s a maximum-security prison. Other worlds have borrowed Sherrinford for a Holmes’ brother name.

The surname of Irene Adler, an opera singer turned adventuress who crossed paths with Sherlock. While she appears just once in the original stories, she’s mentioned frequently in several stories, including “His Last Bow.”

A housemaid in one of the Holmes stories, and a typical name from the era. While Agatha has yet to be revived in the twenty-first century, Aggie feels like a logical companion to Abby and Maggie.

A go-to name for female characters, including Alice Turner in “The Boscombe Valley Mystery,” one of many instances of Holmesian deduction saving an innocent man, despite a large body of evidence suggesting his guilt.

As in the author himself.

For 221B Baker Street, one of the most famous literary addresses in the world. The Baker Street Irregulars are a group of young boys Holmes regularly pays to help with his investigations, as they slip by unnoticed on the streets of London. In 2021, a Netflix series titled The Irregulars focused on this group, some years later. They were given names: Bea, Spike, Leopold, Jessie, and Billy. The surname was also used for other characters in the series, like Henry Baker in “The Adventure of the Blue Carbuncle.”

The delightfully named twin brothers Bartholomew and Thaddeus Sholto appear in The Sign of the Four.

English actor Basil Rathbone is one of the most famous men to ever don the deerstalker hat.

While he has plenty of competition, Benedict Cumberbatch is the modern answer to Rathbone.

A character from “The Hound of the Baskervilles,” and a long neglected gemstone name for a daughter.

“The Adventure of Charles Augustus Milverton” was one of many short stories. The character is a villain – a blackmailer, eventually murdered. It’s such a typical name from the era, though, and Charles Augustus is too good of a combination to go unmentioned.

Also borrowed from the author. While it might make some think Barbarian, Conan feels like an overlooked Irish classic these days.

The name of one of many criminals who crossed path with the detective, Duncan Ross is known by other names, including William and Archie.

The American woman at the heart of the mystery in “The Adventure of the Dancing Men.”

A little sister, every bit as good at cracking cases as her brother, Enola Holmes was introduced in a series of YA novels by Nancy Springer. While Enola is often considered the word “alone” written backwards, the character explains that her mother gave it to her to encourage independence.

Enola is not the only sister ever invented for the super sleuth. The character Eurus is the secret Holmes sister in Sherlock. She tells us that her name is Greek for “the east wind.” Eurus is the most brilliant of them all, but she’s also downright mad and more than a little given to evil.

Sir Arthur Conan Doyle gave us Inspector Lestrade with the first initial G. It’s been filled in with various names over the years. The BBC’s Sherlock called him Greg; in Elementary, he’s the more British Gareth.

Holmes and Watson come to the assistance of Miss Helen Stoner in “The Adventure of the Speckled Band.” It’s said that Doyle himself thought it was his best Sherlock Holmes adventure, a classic locked-room mystery.

A minor character from “The Adventure of the Empty House,” Hilda is a delightfully old school name that sounds just right in the Sherlock stories, but remains rare today. Her surname, Adair, also has possibilities – perhaps more than Hilda.

Sir Hugo Baskerville is the first victim in “The Hound of the Baskervilles,” the original family member to suffer the ill-effects of a curse.

We first meet Irene Adler in the short story “A Scandal in Bohemia.” She appears in plenty of adaptations. Rachel MacAdams famously played the part opposite Robert Downey Jr. and Jude Law in the 2009 and 2011 movies.

The world is filled with James, but one stands out in the world of Sherlock Holmes: Professor James Moriarty. He’s the detective’s nemesis, a ruthless, criminal mastermind. In 1893’s “The Final Problem,” we meet Professor Moriarty, and are led to believe that he kills Holmes in a struggle. (Public pressure, of course, would bring Holmes back.)

In 2012, the world met Jonny Lee Miller’s version of Sherlock, as a modern detective who left London for New York City, where he met Dr. Joan Watson. Played by Lucy Liu, Joan

The given name of Dr. John Watson, veteran and medical man, who stumbles into his role as Sherlock’s chronicler and companion while looking for a room to rent.

A minor character – and victim – in “The Valley of Fear.”

In the original stories, Mary Morstan first appears in The Sign of the Four, but she’s been borrowed for other adaptations since. In Sherlock, she’s John’s wife and a secret assassin.

Sherlock’s big brother Mycroft Holmes is every bit as smart as his sibling, but also usually presented as more respectable. His name might be even less wearable than even Sherlock. As a surname, Mycroft probably comes from Meadowcroft – meadow plus field.

Before the author settled on John Watson, Sherlock’s sidekick was set to be named Ormond Sacker.

Scarlett is wildly popular as a girl’s given name. But spell it with one T, and it evokes 1887 novel A Study in Scarlet, the first appearance of Holmes and Watson. The name comes from a famous line by Sherlock: “There’s the scarlet thread of murder running through the colourless skein of life, and our duty is to unravel it, and isolate it, and expose every inch of it.”

The name Sherlock Holmes is forever wedded to the fictional detective; it’s hard to imagine the name on anyone else. But it has been used in the US. In the year 2017, as the BBC series Sherlock was enjoying peak popularity, a dozen boys received the name.

One reason for the Sherlock Holmes stories’ success? The illustrations by Sidney Paget, an in-demand illustrator of the day. Paget gave the detective his iconic deerstalker hat and Inverness cape.

Inspector Tobias Gregson of Scotland Yard appears in several stories. Holmes considers him bright, by Scotland Yard standards – though that’s not exactly a compliment. In Elementary, Gregson became an NYPD captain, and his given name was changed to Thomas.

Sherlock’s faithful sidekick, and chronicler of his adventures. His first name is John; middle initial H. It’s said that the author took his inspiration from a friend named James Watson.

It’s too classic a name to feel closely linked to the stories, but it’s worth noting that William Gillette helped bring the Sherlock Holmes character to life on stage, and in a 1916 silent film. Gillette wore the deerstalker suggested in early illustrations, and added the famous curved meerschaum pipe.

This list barely scratches the surface of Sherlock Holmes characters, either from the original British author’s collection of stories and novels, or from the many adaptations across the years.