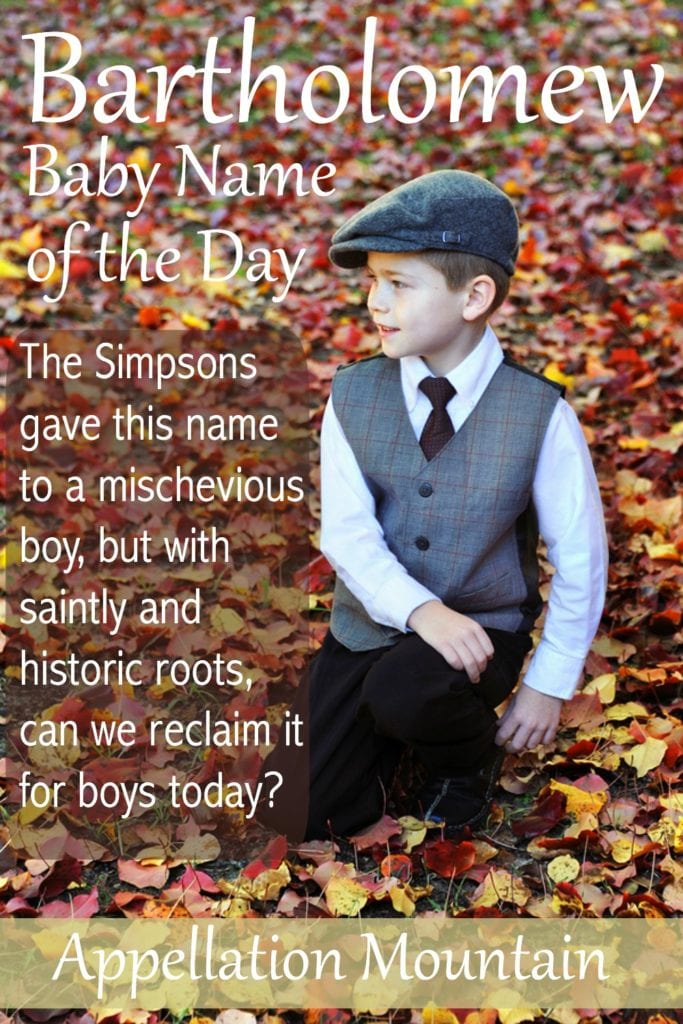 Bartholomais comes from Aramaic. It means son of Talmai, or maybe son of the ploughman.

Most accounts say that he traveled to India, and later Armenia. Legend says that he converted the King of Armenia before being martyred.

Some scholars speculate that he’s the same figure as the New Testament Nathaniel, but there’s no connection between the names.

Bartholomew: Through the Ages

The name occurs steadily throughout the historical record.

A lengthy list of painters, sculptors, historians and other notables from the 1200s onward suggests that this name was fairly common over the centuries. There are at least seven saints Bartholomew, along with another dozen Blesseds. An early 1800s Italian saint answered to the feminine form – Bartolomea.

Not every bearer of the name made this world a better place.

A second Black Bart robbed stagecoaches in the American West in the 1870s and 1880s. Born Charles Bolles, this Black Bart made his reputation as a gentleman, known for leaving behind poems after his robberies and never firing a shot.

Dr. Seuss’s The 500 Hats of Bartholomew Cubbins was published in 1938.

Seuss set his story in the feudal Kingdom of Didd, where young Cubbins could not doff his hat to the king. Every time he removed it, another one simply appeared in its place.

Eleven years later, Seuss used the name again, in a sort-of sequel titled Bartholomew and the Oobleck. The 1949 story follows the adventures of a young boy rescuing his kingdom from sticky, green Oobleck, raining from the sky.

Bartholomew: By the Numbers

Nancy lists this name as a Victorian favorite, and there’s no question the name appears in English over the years.

Bart fared better, peaking around 1959. By the late 1980s, just Bart had also exited the charts.

The eldest son of Homer and Marge Simpson debuted on The Tracey Ullman Show back in 1987. The animated family quickly became a sensation, and remains the longest-running American scripted prime-time television show.

He answers to Bartholomew JoJo Simpson, but rarely do we hear his full name on the show.

With names like Sebastian, Benjamin, and Jeremiah in the US Top 100, Bartholomew could fit right in. Possible nicknames include Bate, a good alternative to Bart. If you like your boy names long and traditional, this one might belong on your list.

What do you think of Bartholomew? Would you consider this name for a son?

This post was originally published on March 18, 2009. It was substantially revised and re-posted on September 12, 2016.