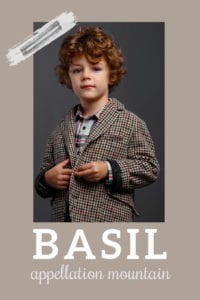 The baby name Basil feels vintage, gentlemanly, and at-home in the garden.

Thanks to Unknown for suggesting today’s Baby Name of the Day, and to Kathleen for requesting an update.

The plant has been around for at least 5,000 years, grown in India and Asia, and today can be found in both cuisines across the world.

It was used in ancient perfumes, too. In fact, it was once associated with royalty. Which hints at the name’s even deeper origins.

In Greek, basileus meant king. The word almost certainly goes back farther still. As a title, it was used in ancient Greece and the Byzantine Empire. The title appears on tablets found in the ruins of Mycenae, which dates them to somewhere around 1200 BC – or even earlier.

Basilica – today a term for a significant church – also comes from basileus.

It’s not clear when – or how – Basil leapt from title to given name. But by the 300s, the future Saint Basil the Great served as bishop in Asia Minor. (That’s modern-day Turkey.) A theologian by training, Basil engaged in weighty debates of his day, while also serving the poor and helping to establish monastic life.

Other Basils appear across history – rulers, religious figures, and military ones, too.

Eventually, Crusaders brought the name back from their travels. By the Middle Ages, it’s heard across Europe, including England.

Between the returning Crusaders and the renown of Saint Basil the Great, this name is heard throughout much of the Western world. As Basil is a saint – arguably an even more important figure – in Eastern Christianity, the name spread farther still.

Put them together, and notables answering to some form of the name start to add up.

There’s Russian painter Wassily Kandinsky, who pioneered abstract art; fictional Russian chess player Vasily Borgov in The Queen’s Gambit; Don Basilio in Rossini’s opera The Barber of Seville; and dozens more, answering to Basile and Vasil and on and on.

But in English, the baby name Basil brings to mind one figure: actor Basil Rathbone.

Until Benedict Cumberbatch came along, he was arguably the most famous person to play Sherlock Holmes.

Rathbone’s long career spanned stage, radio, and more than 70 movies. He played the legendary detective on screen 14 times between 1939 and 1946.

Americans tend to say basil, the herb, with a long A, like table and nasal. But the English pronounce the baby name Basil like babble and castle, with a short A sound. Plus, the ‘s’ becomes more of a ‘z’ sound – Basil just about rhymes with dazzle.

Reinforcing the detective tie-in is The Great Mouse Detective. Disney made a movie version starring the animated Basil of Baker Street back in 1986. His adversary? The criminal mastermind Professor Ratigan, of course.

Other literary references include From the Mixed-Up Files of Mrs. Basil Frankweiler, a 1968 Newberry Medal-winning children’s novel from EL Konigsburg.

In the 1970s, John Cleese played Basil Fawlty in the short-lived but much-loved Britcom Fawlty Towers. The character is rude, snobbish, and unforgettable – which might’ve helped put a chill on the baby name Basil for a time.

It was never especially popular. The 1920s represented peak use, but the name never made it out of the 300s.

While it still feels a little tweedy and English, that’s not necessarily a strike against the name. We love choices like Simon and Arthur because they sound distinguished and intelligent. The baby name Basil feels like an even rarer name that shares the same qualities.

And, of course, the baby name Basil fits right in with popular choices from River to Sage. Call it an ecovintage pick, one equally antique and tied to the natural word. The baby name Basil sounds like a brother for Lillie or Flora.

We might be just one high profile figure away from hearing more parents consider this name.

What do you think of the baby name Basil? 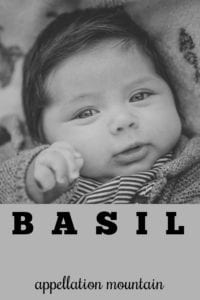