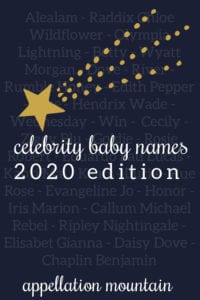 What were the most intriguing celebrity baby names 2020?

High profile birth announcements often include Top 100 favorites. (The stars, they’re just like us.) Others venture into the never-before-heard. In fact, 2020 gets credit for the wildest, least name-like celebrity baby name in memory.

But they’re also an intriguing mix of choices that might represent the next big thing. Names that are already trending, but could soon be heard even more often.

This year’s list is the biggest ever – by a lot!

But it could still grow. Not only do a few weeks remain in 2020, but it’s been easier than ever to keep a pregnancy under wraps this year. No more walking the red carpet with a bump, for starters, plus many fewer in-person anythings.

Here are the celebrity baby names 2020 we do know all about, the ones that stand out – mostly for the good, but occasionally for the just plain unforgettable.

Wren ranks in the Top 1000, and Lark Voorhies makes her avian name high-profile. But the bird name of 2020? No question it’s Dove.

And then Katy Perry and Orlando Bloom welcomed daughter Daisy Dove in August. Orlando is also dad to son Flynn. Some raised an eyebrow at the combination Daisy Bloom, but I can’t get over how much I love Daisy Dove.

Rooney Mara and Joaquin Phoenix welcomed their first child, a son named River. That’s a pretty mainstream pick for a son, of course. But it’s also the name of Joaquin’s late brother, who passed away in 1993. His untimely death pushed the name into the headlines, and, eventually on to birth certificates. It all came full circle with this moving celebrity birth announcement.

Former LA Lakers star Pau Gasol – and teammate of the late Kobe Bryant – named his new daughter Elisabet Gianna. Her middle name honors Gianna Bryant, who perished with her father in a helicopter accident earlier this year. This is the first child for Pau and Catherine McDonnell; Elisabet’s godmother is Kobe’s widow and Gianna’s mom, Vanessa Bryant.

Active verb names fall somewhere in between. They blend encouragement and sky-high expectations.

DJ Diplo welcomed son Pace with model Jevon King earlier this year. It’s a bright, energetic name. But it’s not quite a word we use in everyday speech. Diplo is also dad to sons Lockett and Lazer with ex Kathryn Lockhart.

But the name that wins is this category is, well, Win.

It’s an active name, and a confident one, too – a mix of encouragement and confidence. Maybe it’s a lot to live up to. But then again, so is being Russell Wilson’s son.

For every Emma Grace, there’s an Emma Elsinore. A dramatic, unexpected middle can change the overall image of a name. And while they might be a secret – even an embarrassing secret to your teenager – they feel like delightful surprises, too. Here we are, imagining the L stands for Louise or Lee, and it’s Lightning. That’s amazing.

In the honorable mention category, how about Edith Pepper? She’s the daughter of Abby Elliott and Bill Kennedy. A Saturday Night Live alum, Abby is the daughter of comedian Chris Elliott, who just wrapped up his role as Roland on Schitt’s Creek. Edith is a buttoned-up, vintage pick. Pepper – the name of a feisty orphan from Annie and Iron Man’s true love – feels a little bit retro, too, but in a very sparky kind of way. Together it’s charming.

And then there’s Jenna Dewan’s new son with Steve Kazee, Callum Michael Rebel. Callum Michael is a pitch-perfect 2020 boy name, a rock solid middle with a stylish first. But that bonus middle is extra bold: Rebel. It’s much too much as a first, but works beautifully paired with the full name. Jenna is also mom to Everly with her ex, Channing Tatum.

Cameron Diaz and Benji Madden welcomed a daughter, their first, on January 3rd. I’m (still) not sure what to make of Raddix. It doesn’t sound quite like a name. But Chloe Wildflower? That’s a swoon-worthy combination, a mix of twenty-first century favorite and well-why-not daring nature name. If they’d name her Chloe Wildflower, it might’ve been my personal favorite among the celebrity baby names 2020.

HOW TO OUT-KARDASHIAN THE KARDASHIANS: X Æ A-Xii

Just as 2020 was going off the rails, tech entrepreneur and musician Grimes announced the birth of their son X Æ A-12, which was later amended to X Æ A-Xii, presumably because California does not permit numbers on birth certificates.

I mean … every year sees some wild, bananas, wait-is-that-really-a-name names. There are more Kardashians to be born, I’m sure. And yet, I always find much to respect in bold baby names. Often the wildest, most out-there picks feel surprisingly mainstream just a few years later.

Still, we have some conventionally eye-brow raising names this year, too.

And Vampire Diaries star Matthew Davis and wife Kiley Casciano named their daughter Ripley Nightingale. It’s a great first and a bold middle. Together, though, it’s kind of a lot of name.

In true Lively-Reynolds style, the famous couple didn’t announce their daughter’s name, as much as they let it slip. In this case, Blake Lively’s BFF, Taylor Swift, recently released a song titled “Betty.” Blake and husband Ryan Reynolds welcomed their daughter back in late 2019, but it makes the celebrity baby names 2020 round-up because we really didn’t a know a thing about the littlest Miss Reynolds until recently.

Ever since Mad Men introduced us to frosty, elegant Betty Draper, the name has felt like it was on the edge of a comeback. But it never quite happened. Now this long-time Top Ten name might finally catch up with sparky retro picks like Sadie and Millie, all thanks to a song – and the celebrity baby who inspired it.

Betty joins older sisters James and Inez. James, of course, helped push the practice of choosing James as a girl’s name – at least in the middle spot – even more into the mainstream.

Vintage gems are everywhere, and there’s an honorable mention in this category, too: Cecily Philips. daughter of Broadway actors and Chicago Med alums Patti Murrin and Colin Donnell. Cecily feels delicate and lacy, but with plenty of spirit. It’s an alternative to Felicity, a sister for Dorothy. But it’s also well outside of the current US Top 1000 – for now.

No one names quite like former Hollywood power couple Angelina Jolie and Brad Pitt. Together they’re the parents of sons Maddox Chivan, Pax Thien, Zahara Marley, Shiloh Novel, Knox Leon, and Vivienne Marceline. Every name is different, but each reflects the circumstances of that child’s arrival to their family. They’re all distinctive and stylish, and two of them – Maddox and Pax – have sparked major trends.

Are there other big families with similarly eclectic, but stylish sibsets? I nominate Carson Daly and Siri Pinter. The couple have four children: son Jackson James, and daughters London Rose and Etta Jones, plus new arrival Goldie Patricia. The middle name comes from Carson’s mom. The names vary by style category, but they all feel like they belong together, too.

Other sibsets aren’t eclectic at all. They’re right out of a textbook, the kind of names you’d dream up to go together.

Actor Luke Cook of The Chilling Adventures of Sabrina, welcomed a son named Chaplin Benjamin. It’s the first child for Luke and wife Kara Wilson. No word on the reason the couple chose the name, but it tracks with so many popular choices. Chaplin brings to mind Hollywood legend Charlie Chaplin, which puts it in the same category as Tinsel Town surname Harlow.

UK reality series Love Island alum Jack Fincham welcomed daughter Blossom with ex Casey Ranger. Never heard of Jack? I get it. But … reality stars often share more of their, well, real life in the media. And so even without ever seeing an episode of the series – or recognizing her dad’s name – baby Blossom’s name caught my eye.

It’s a pan-botanical choice, a name that gathers up the whole garden. If you’re torn between Lily and Rose, Blossom is neither and both at once. Some parents might remember the early 90s sitcom Blossom. The character was named for jazz legend Blossom Dearie. (Yes, it was her real name.)

And so while it’s easy to dismiss it as another wild word name, Blossom has potential.

Food Network’s Katie Lee welcomed Iris Marion wtih husband Ryan Biegel. An up-and-coming name that’s equal parts modern flower power pick and vintage charmer, Iris makes a great choice for a 2020 daughter. Besides being a name from the garden, Iris was the Roman goddess of rainbows – a hopeful symbol in a challenging year.

Former Bachelorette star Emily Maynard welcomed her fifth child, and fourth with husband Tyler Johnson. Emily is mom to daughter Ricki. Since marrying Tyler, they’ve added sons Jennings, Gibson, and Gatlin to their family. And now their newest arrival is another girl: Magnolia Belle. It’s a sweetly Southern choice that fits in with their family’s style perfectly.

I’m all about formal names with great short forms. But sometimes nicknames wear beautifully on their own.

This year’s proof? Hotel heir Barron Hilton and his wife Tessa welcomed daughter Milou Alizée. The couple shared that they met at Pointe Milou on St. Bart’s, so that makes this a place name. But Milou mostly evolved as a smoosh of Marie-Louise.

Honorable mention goes to Rosie Robert, daughter of Twenty One Pilots frontman Tyler Joseph and wife Jenna Black. The couple went with Rosie, rather than Rose or Rosalie or Rosalind on their daughter’s birth certificate. It’s almost a classic, and maybe not quite as casual as Sadie or Millie, either. As for the unconventional masculine middle? She gets it from dad, and it looks like Tyler got his middle from his grandfather, Robert Joseph.

DJ Khaled chose a richly meaningful name for his new son: Aalam. While it doesn’t seem to be a common given name in Arabic, it is a word with a positive meaning: the world. Khaled and wife Nicole Tuck are also parents to son Asahd. Big brother’s name means lion.

On a similar note, Kel Mitchell welcomed son Honor, who joins sister Wisdom. Honor and Wisdom are the actor’s children with wife Asia Lee. He’s also dad to son Lyric and daughter Allure with ex Tyisha Hampton-Mitchell. They’re all word names, but I particularly like Honor for a boy’s name.

The NBA’s Iman Shumpert and wife Teyana Taylor named their older daughter Iman Jr. – which is noteworthy for all sorts of reasons. But it’s the mini name they chose for their new arrival in 2020 that makes this year’s list, the brief and complete Rue Rose. Seven letters, two syllables, so much style.

Reality television mega-family the Duggars is known for their endless parade of J names. But Jinger Duggar Vuolo and husband Jeremy have a very different approach. And it’s quite appealing, too. They welcomed Felicity Nicole in 2018, and recently added Evangeline Jo to their family. They’re vintage and meaningful girl names. Another fun connection: Nicole is Jinger’s middle, while Jo comes from Jeremy’s middle, Joseph.

A trio of wonderfully named W firstborns arrived in 2020.

On the girls’ side, Sophie Turner and Joe Jonas welcomed daughter Willa. It’s a feminine form of classic William with a homespun vibe.

And then Harry Potter alum Rupert Grint and Georgia Groome announced the arrival of daughter Wednesday. It’s a word name that brings to mind The Addams Family – which seems like strange inspiration for a child’s name. But Wednesday is another name in the key of January and Sunday, a calendar-inspired choice that seems very wearable.

On the boys’ side, journalist Anderson Cooper welcomed son Wyatt Morgan. While Wyatt is currently a Top 100 favorite for boys, it honors Anderson’s dad, the late Wyatt Cooper.

What are your favorite celebrity baby names 2020? Are any of these names you’d consider for your children? 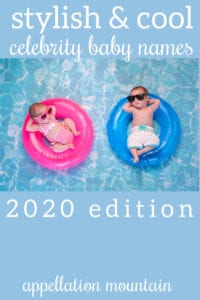