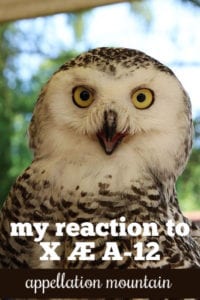 Just when you thought 2020 couldn’t get any crazier, Elon Musk and Grimes had a baby.

And they named their new son … wait for it …

Well … probably not. I should say that Elon Musk announced his new son’s name on Twitter as X Æ A-12.

As others have pointed out, this can’t be his actual, legal name. We’re assuming the baby was born in California, where Musk lives. California limits names on birth certificates to the 26 letters of the alphabet. That means no cedillas, umlauts, or tildes. (Yup, that means that in California, you’re not José. You’re Jose.)

So if that’s not his actual name, what did Elon Musk and Grimes name their son?

There are some great theories rounded up here. (Thanks to Deanna for the find.)

Vancouver-born Grimes started out life as Claire Elise Boucher. The stage name Grimes dates back to her early days on MySpace. It’s a reference to grime music, which no, isn’t exactly her genre. Apparently, it was just one of those things that stuck. She also uses the symbol c, which represents the speed of light.

Tech entrepreneur Musk is just plain Elon Reeve Musk. But daring name is in the family. His siblings are brother Kimbal and sister Tosca.

Elon’s children with first wife Justine Wilson are twins Griffin and Xavier, born in 2004, and triplets Kai, Saxon, and Damian, born in 2006. He and his ex also had a son named Nevada, who passed away as an infant. They’re not terribly daring choices, though Kai and Saxon were at least a little outside the 2006 mainstream … and Saxon remains so.

The couple first connected on Twitter over a pun. (No, seriously. You can read all about it here.)

As for the Æ? The new mom previously used the symbol in a song title, 4ÆM. It’s pronounced just plain 4-A-M in the song.

The A-12 might be tougher to unravel. The Lockheed A-12 was part of the CIA’s Archangel project, an attempt to develop reconnaissance aircraft. Grimes also released a celebrated album titled “Art Angels” in 2015. There are plenty of other science and tech references, as well as at least one from the world of chess, so maybe I’m missing it.

My favorite guess is that his name is actually Sasha. Æ is also the ligature ash; it’s also a letter in several Scandi alphabets. It’s sort of an X-ash-A mash-up, right?

Sasha fits with Elon’s older sons’ names. And while Grimes is an edgy artist, she’s Met Gala edgy. I’m guessing there are limits to what she’d actually call her kiddo.

Doubtless we’ll know more eventually. For now, I can’t decide if this birth announcement is crazy clever or a little too cute. The couple definitely wins the whole cryptic birth announcement game. I mean … if that’s a thing. Is it a thing?

It turns out that the baby’s legal name will be X Æ A-Xii, presumably because his name couldn’t be registered in California with the number “12” included.

As for what they’re actually calling him? It’s nothing as normal as Sasha.

Apparently, his daily use name is “Little X.”

Image by Kevinsphotos from Pixabay