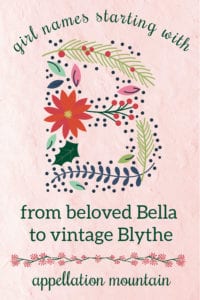 Girl names starting with B run the gamut. There’s (literally) pretty Bella and Belle, place names like Brooklyn, and borrowed-from-the-boys Billie and Blake.

Brittany might be the quintessential 90s name, thanks to Ms. Spears – who spells it Britney.

Long before Brittany came Beth – remember the power ballad? And Barbara, a smash hit song, iconic doll, and name of more women than any of us can count.

The letter B currently ranks twelfth out of 26 first initials in the US.

Let’s dive into to all of the beautiful and bold girl names starting with B.

TOP 500 GIRL NAMES BEGINNING WITH B

A place name that picks up on earlier favorite Brooke, with the popular -lyn ending, plus a dash of urban sensibility.

Isabella is more popular, yes. But just Bella fits right in with Ella and Stella, a name sound that defines a generation.

It might be short for Gabrielle, though Brielle owes something to Brianna, too.

Speaking of Brianna, this feminine form of Brian caught on like wildfire in the 1980s and 90s. It’s still enjoying some popularity.

A bright and energetic surname name, Bailey was another 90s breakout hit.

Brynlee is either a creative spelling of surname Brinley, or a Brynn-Lee mash-up. Either way, it’s racing up the charts.

Speaking of celebrities, Blake Lively helped put Blake on the list of possibilities for our daughters.

Drop the first syllable from recent chart-topper Gabriella and you’ll have just Briella, a pretty name that stands on its own.

A Welsh name meaning hill, Brynn tends to be feminine in the US, a name in the key of Sloane, Blair, and Quinn.

A tailored surname name, Blair is just one sound removed from classic Claire. It’s also boosted by the small screen, from The Facts of Life to Gossip Girl.

A surname name that feels just on the right side of feminine, thanks to so many girls named Brynn and all those -ley ending favorites.

Bianca sounds glamorous, maybe because Nicaraguan-born socialite-turned-activist Bianca Jagger introduced it to the English-speaking world in the 1970s.

Recently coined, Braelynn mashes up all sorts of popular sounds to create an on-trend possibility in the key of Kaylin and similar.

VINTAGE B NAMES for GIRLS

A Top Ten favorite from the 1920s into the 50s, traditional and international Barbara had a good run. Is it too soon to call it vintage? Maybe … but give it another decade or two, and that will almost certainly change.

Traditional Beatrice reigns as a literary favorite, thanks to Dante’s Divine Comedy.

A vintage gem associated with a saint, Bernadette might be the next vintage revival name.

A green gemstone name, tailored and with a long history of use, but quite rare today.

Another long-time nickname for Elizabeth, Bess feels like a logical successor to Tess.

A haunting Kiss ballad, and another Elizabeth nickname that’s not heard often today.

A Top Ten name from the 1920s into the 40s, Betty has long been in hibernation. But a Taylor Swift song – and the Blake Lively-Ryan Reynolds daughter it names – might just change that.

The French form of the name, Blanche means fair. It’s awfully Golden Girl today, but then that hasn’t hurt Sophia, Rose, or Dorothy.

A sweet nickname name, Bonnie is a Scottish nickname meaning pretty. Parents today might think of it as a child from the Toy Story series. (She inherits Andy’s toys when he goes off to college.)

An Irish goddess name, and later the name of a revered saint, Bridget feels traditional. And yet, it’s never entered the US Top 100.

OVERLOOKED B NAMES FOR GIRLS

A surname name with a great meaning – beautiful friend – Bellamy’s Bell sound makes it a natural possibility for a daughter.

Sparer than Bella, Belle is a Disney princess – and so far, much less common than the -a ending form.

The storied California city spells it with an extra ‘e’ – Berkeley. But this is the more popular choice for a child’s name.

Bethany owes something to Elizabeth, and a little bit to Brittany, too. But this Biblical place name feels less trendy, and more like a traditional rarity.

Yet another inventive B-ley surname name, this one with roots on the map.

A nature name that also brings to mind another name for the fairytale Sleeping Beauty: Briar Rose.

RARE GIRL NAMES BEGINNING WITH B

A water name, every bit as wearable as River.

If only the Harry Potter villain weren’t so irredeemable, this Bella-Beatrix smoosh could be big. It means “female warrior” in Latin.

A borrowing from Edmund Spenser’s The Faerie Queene, and a Belle-Phoebe combination that seems very wearable.

An herbal name as appealing as Sage.

A lovely Amharic name, Betselot brings to mind so many Bet- names for girls.

A French word meaning jewel, an alternative to sparkling Gemma.

Boyish Billie has long been used for girls, either as a feminine form of William, or as a casual name in the key of Millie and Molly.

We love Wren and other bird names for girls, so Birdie seems like a natural.

A name synonymous with joy, Bliss got a boost from 2009 Ellen Page movie, Whip It.

A Scandi nickname for Birgitta, their translation of Bridget.

Another nature name, borrowed from a climbing vine.

A surname name with literary ties, thanks to the nineteenth century novelists Emily, Charlotte, and Anne.

What are your favorite girl names starting with B? 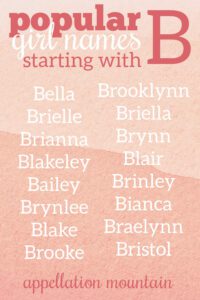 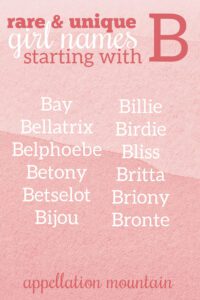 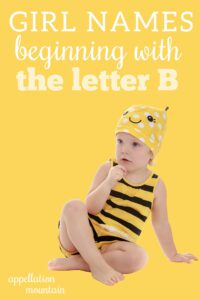