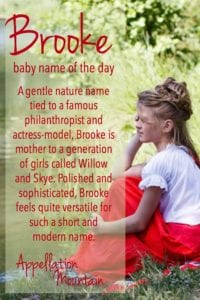 Brooke surely would top the charts today … if only the name hadn’t already been such a big hit.

This name started out as a surname for someone who lived near a brook or stream. That’s true whether it is spelled with or without an ‘e’ at the end.

In Old English, it was broc. Similar words – and surnames – exist in Dutch and German, too.

That makes this a nature name, of course, mother to River and Willow and dozens of favorites in heavy rotation today.

A very few boys were given the name over the years – just like so many family surnames.

But in the 1930s, this slowly started to catch on for girls.

One early example: actress Brooke Hayward, daughter of actress Margaret Sullavan and producer Leland Hayward. Her career started in the 1960s, but perhaps there was some publicity following her 1937 birth. Because by 1940, two dozen girls received the name.

Born Roberta Brooke Russell and known as Bobby to friends and family, the future philanthropist had a globe-trotting childhood. Her dad served as Commandant of the Marine Corps, taking the family all over the world. She married twice – once disastrously, once happily – before meeting the wealthy Vincent Astor. In between, she worked as an editor for Home & Garden.

On Vincent’s death in 1959, her main role became philanthropist, as head of the Vincent Astor Foundation. She dissolved the foundation in 1997, after completing many high profile projects bearing the Astor name. But she remained active in New York City philanthropy for many years afterwards.

Brooke: By the Numbers

In 1953, the year she became Mrs. Astor, Brooke’s name enjoyed a boomlet. 133 girls were given the name that year, up from 51 the year before.

One of the early parents to take notice? Frank and Teri Shields, who gave the name to their daughter in 1965.

That daughter, of course, was future model-actress Brooke Shields.

Shields worked as a model from her earliest years, and rose to fame in 1978’s Pretty Baby. Then came her famous 1980 campaign for Calvin Klein, and a series of equally successful movies. She took time off to earn a degree from Princeton, but has remained in the public eye.

Count Brooke among the latter. Even as Shields left the public eye to study, the name remained in steady use. By the mid-1990s, the name reached the US Top 50. It hovered around the 50 mark into the mid-2000s.

Plenty of other famous women have worn the name, along with fictional characters. Before she joined the cast of Sex and the City, Kristin Davis wore the name as a Melrose Place character. One Tree Hill gave the name to a character, too, as did several soap operas.

In real life, television personalities Burke and Burns have kept the name in the spotlight.

During the 1990s, place name Brooklyn soared up the charts, becoming a staple for girls. It both borrows from the original name’s popularity and makes Brooke feel like the more established choice.

And yet, the legacy of Mrs. Astor and the long career of Ms. Shields gives this name broad familiarity across the generations. We’re not likely to forget it anytime soon. Many modern, brisk girl names are clearly borrowed surnames – think of Sloane and Hadley. Brooke feels like a name, less conventional that Kate but with the same polished sensibility.

It’s easy to imagine this name wearing well on a daughter today, and aging every bit as well as it has for the famous figures who wear it so well.

Do you think Brooke feels dated? Traditional? Or nicely modern?