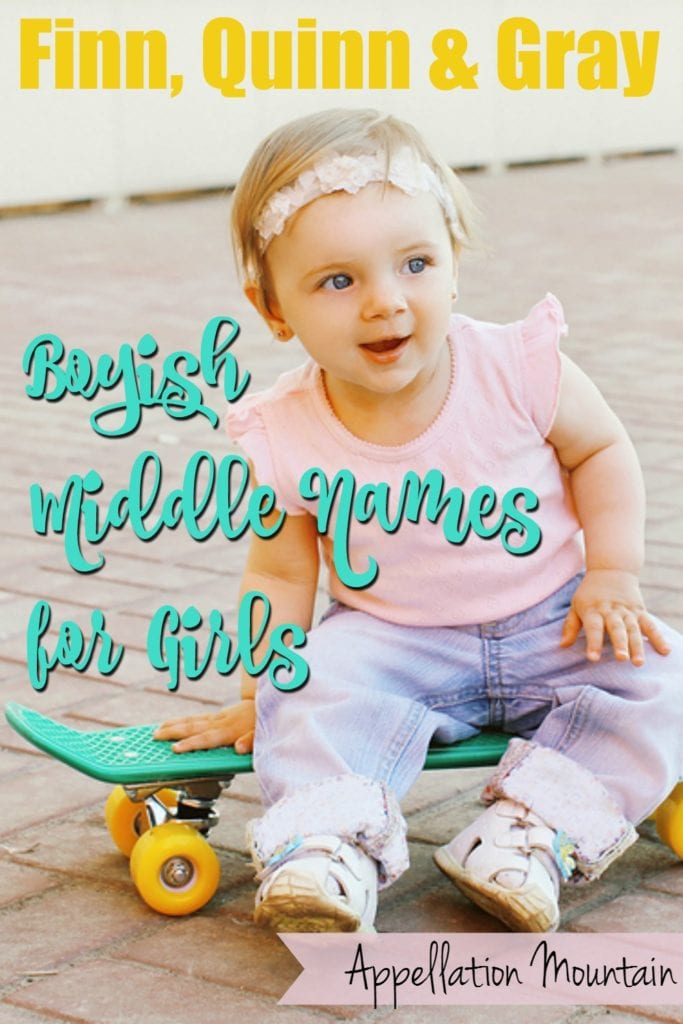 Years ago – probably before I had this blog – I remember reading about a couple who wanted to give their daughter the middle name George.  There was no real reason – it wasn’t to honor a loved one or to remember a significant place.  The parents just plain liked the name.

I don’t know the outcome, but the comments were strongly against the idea.  Name her Georgia, or Jane, the comments insisted.

Since then, the debate on giving boys’ names to girls has become a major controversy in nameland.  But I’ve noticed a quiet little trendlet: giving boyish middles to girls.  I’ve yet to see another family considering George, but I’ve seen more and more girls with conventionally feminine first names with middles that lean masculine.

There are tons of reasons:

Looking for a different, even daring, one-syllable middle name for a girl?  Read on for some names to consider.

These names have a long history of use.  If you’re eager to honor a male relative, but you’re expecting a girl, some of these names work very well in the middle spot for a daughter.

George – The name that inspired this post, and one that could work well for a daughter.

James – He’s the leader of the pack, an evergreen name for boys.  P. Diddy named one of his daughters Jessie James.  Jessica Capshaw has Poppy James.  James Marsden has Mary James.  A.J. McClean went with Ava Jaymes for his daughter.  I’ve heard James and Jaymes more and more in birth announcements for girls in recent years, too.  Blame it on Jamie Buckman from 1990s hit sitcom Mad About You – her husband nicknamed her James.

Jude – He has plenty of history as a masculine name, but Jude has also been short for Judith.  A combination like Isabella Jude could be a great combination of the extravagantly feminine and the more tailored.

Scott – Something about Scott feels like it would be surprising for a girls’ middle – but not in an unwearable way.  Serena Scott, maybe?  It feels like a family surname tucked in the middle.

Ray – Ray – and especially Rae – have been used for girls in the past, so this isn’t the most shocking possibility on the list.  It’s a great way to honor a Raymond or a Rachel.

Blake – Lovely actress Blake Lively has helped us see this as a feminine possibility.  I like her best in the middle spot, too – Genevieve Blake or Eleanor Blake.

Blair – She’s close to Claire, and with two famous television characters answering to the name, Blair feels like an option for a daughter.  In the middle spot, she’s stunning.

Brooks – Sometimes viewed as the masculine form of the feminine Brooke, I can imagine Brooks in the middle spot for a daughter, too.  The same goes for most of the ends-with-s names: Ames, Gates, and so on.

Clark, Clarke – It’s an occupational surname for a clerk, and the alter ego of Superman, too.  But if the avian Lark can be a girls’ middle, is Clark so unthinkable?

Dean – We’ve had girls called Dawn, Dale, and Dana.  Is Dean a possibility?

Tate – If Clark is close to Lark, then Tate is next to Kate.  It’s easy enough to imagine this one in the middle spot for either gender.

Reece, Reese – The lovely Miss Witherspoon put Reese on the map for girls.

Beau, Bo – Yes, I know.  Beau is masculine in French, and Belle is reserved for girls.  But isn’t Belle a little overexposed?  If the spelling troubles you, there’s also the very brief Bo.

Chase – Chase is big for boys these days, but could work well in the middle spot for a daughter, an active, preppy name.  Jase and Trace could be other options, too.

Cole – Respell it Kohl, and it is a color name, and feels more feminine.  Cole might also work as an update to Nicole, or a means to honor a Nicholas with your daughter’s middle.

Drew – Hollywood’s Drew Barrymore makes us see this one as feminine, as does the ancient name Drusilla.  Using Lou as a middle name can read cutesy, even hick, especially if your daughter’s first name ends with a y.  Sadie Lou is a Southern double name, while Sadie Drew is more restrained.

Kai – A handful of girls have been named Kai or Cai in recent years.  It’s a twist on conventional feminine middle Kay.

Lane – I think “Penny Lane” immediately, and that’s definitely a girl-friendly reference.  While this one is far more popular for boys, I have a hard time seeing it as anything other than gender neutral.

Finn – I’ve heard this one on a girl, paired with a very traditional, feminine first name.  It made Finn feel fresh and surprising again.  The carefree spirit of Huck Finn shouldn’t be exclusive to a boy, should it?

Flynn – Rising on the heels of Finn, Flynn is close to that once-popular girls’ middle, Lynn.

Quinn – Glee’s head cheerleader Quinn Fabray has helped boost the idea of Quinn as a girls’ name.  Turns out that the fictional Miss Fabray’s parents were a fan of this style.  Her full name is Lucy Quinn Fabray.

Zane – I’ve put this one on the list and taken it off – then added it back again.  On the plus side, Zane rhymes with Jane and shares sounds with Zoe and Zara.  On the negative side, Zane feels more decidedly cowboy to me – and those are that names that I’ve tended to avoid on this list.

Ash – There are lots of moms out there answering to Ashley, a name that now feels ready for a rest.  But how ’bout Ash in the middle spot?  It takes the 80s favorite and lends it a nature name twist.

Blue – The most famous Blue is a girl, but given the color’s connection to all things baby boy-related, it fits on this list.

Coe – Trade Joe’s J for a C, and you’ll have Coe, inspired by the jackdaw – a kind of crow.  That might not be the best avian reference, but Coe seems like a mix of Cole, Bo, and Jo – and worth considering.

Fife – Looking for a musically-inspired middle?  I’m a fan of Fife, as in the simple flute with roots in the Middle Ages.  It’s also a place name from Scotland.  Patrick Dempsey has a daughter called Tallulah Fyfe.

Keir – It’s Gaelic, a place name found in the both the last and first name spots.  Keir rhymes with sheer, and in our age of Keira – and Kyra, Ciara, and Kira – there’s something striking about this simple choice in the middle.

West – Direction names are stylish, and West works.  Dare I add North to the list?

Would you consider a short, gender neutral middle for your daughter?  Do any of these appeal?  Are there any that should be added to this list?