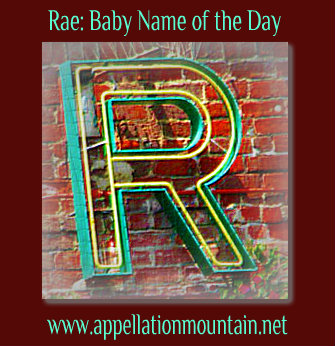 Spell it Ray, and it’s been worn by notable creative men, and of course, rays of sunlight.   Swap the y for an e, and suddenly this name leans feminine.

Thanks to Jaimia for suggesting Rae as our Baby Name of the Day.

He’s also a name with history aplenty.  Raginmund came to England with the Normans as Raimund, Reimund, or Raimond.  Eventually he became the familiar Raymond, the name that every loves.  Er, loved.  After more than a century in the Top 100, he’s on a steady decline in recent years.  Still, there were at least two saints by the name, and he deserves to be considered a classic.

But Ray doesn’t necessarily come from Raymond.  Especially if we’re talking about Rae, the name could be short for Rachel, an Old Testament appellation meaning ewe.  Like Raymond, she ranks among the classics.

And then there’s the association with sunshine.  From Summer to Soleil, names that bring to mind the sun are current favorites for girls.  Ray of light comes from the same roots as the Latin radius – spoke.  It’s a fairly recent innovation.
Both Ray and Rae are also surnames, with plenty of possible origins, from the French word for king to a Middle English word for deer.

All of this makes Rae for a girl feel like a modern choice, one borrowed from the boys.  Only it isn’t so.

Despite her modern feel, she’s actually something of a vintage choice.

We’ve also seen Rae in compound names, like Raelyn, and her sound occurs in Rayna and other names.  While they’re in the Top 1000, somehow they don’t seem the most current of sounds.
But Rae has a simplicity and purity that makes her stand out.  Single syllable names for girls are quite stylish.  From the Biblical Ruth to the botanical Fern, the surname Sloane to the virtuous Grace.
If you’re after a short, frills free name that splits the difference between the modern and the traditional, Rae could be the name for you.
Photo credit: original by TooFarNorth via Flickr