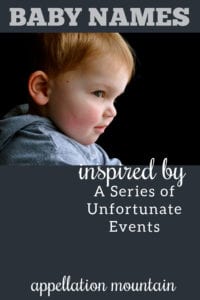 Baudelaire baby names come from enduring children’s books A Series of Unfortunate Events. They’ve adapted more than once, mostly recently by Netflix, meaning that countless children have read, watched, or both, the series.

Confession: I never read the books as a child. The movie gave me the creeps. But my daughter discovered them, just as the Netflix original series launched in January 2017, and I fell in love.

Now I cannot believe it took me so long to discover them!

Since I’m late to the party, I guarantee many of you are far more versed in Baudelaire baby names (and names from all the characters in the series) than I could ever possibly be.

In brief, the series consists of thirteen novels, penned by Daniel Handler under the pen name Lemony Snicket, though Snicket also features in the stories. In the beginning, we meet three children who have just been orphaned under mysterious circumstances, and the guardian who is only interested in their fortune, Count Olaf. Olaf is no match for the quick-witted kids, but because adults routinely fail to intervene, unfortunate events continue nonstop. There’s a secret society, more clever children, and constant complications, but no real happy ending.

Of course, that means that many of these names belong to adults who come up short for the orphaned Baudelaire siblings. And I couldn’t include Olaf, because he’s the villain of the piece! But many of the names are worthy of consideration, even if the characters are less than noble.

A bonus: since I still know relatively little about the series, I’ll keep this post spoiler-free. And I’m not sure if we’ve heard the last of Violet, Klaus, Sunny, and the rest of the crew.

With the second series coming out later this week, it’s past time to delve into all things Lemony Snicket!

Arthur belongs to a king, a dashing hero. But in the books, Arthur Poe is the lawyer charged with getting the newly orphaned Baudelaires to their guardian safely. He falls short, again and again, throughout the series. And yet, the name makes a great choice for a son, an alternative to other regal options like the more popular William and Henry. It’s climbed more than one hundred spots in the rankings since this post was first published in 2018!

Beatrice belongs to the Baudelaire children’s late mother, and later, to a baby born towards the end of the series. There’s also a boat by the name. A handful of literary references might explain the name. Beatrice is the beloved of Dante, and his guide in The Inferno. French poet Charles Baudelaire also wrote a poem by the name. Both feel like fitting explanations for how she got her name.

Bertrand Baudelaire is husband to Beatrice, and father to Violet, Klaus, and Sunny. His death leaves them orphaned, which is where the series begins. His name has an appropriate meaning for a member of a secret society bent on good deeds: bright shield. Or perhaps it refers to celebrated British philosopher Bertrand Russell. While it seems like a rarity now, it appeared on the fringes of the US Top 1000 into the mid-twentieth century.

Colette appears at the Caligari Carnival. She’s a contortionist. As she’s far from a major character, no one will accuse you of borrowing Baudelaire baby names for a daughter called Colette. But it’s a great choice, tailored, spare, and not too common. If you’re crushed that Madeline is so popular, consider Colette instead.

The Baudelaires eventually meet another set of orphans: twins (or so they think!) Isadora and Duncan Quagmire, named after the legendary dancer. The Quagmires do their best to look out for the Baudelaires. Duncan ought to be more popular – it’s got the same Scottish style as Cameron, and the two-syllable, ends-with-n sound we all love. But so far, it remains nicely under the radar.

Adding an ‘a’ often transforms a name, and that’s the case here: Eleanor is sensible, while Eleanora is her romantic sister. This character is changed slightly from the books to the television series, but she’s yet another adult to fails to come to the aid of the Baudelaires.

Her full name is Esmé Gigi Geniveve Squalor, and she’s delighted to take in the Baudelaires because orphans are “in” this season. (And yes, Geniveve is the spelling from the novel.) Her full name is a JD Salinger reference, which makes Esme doubly literary. It’s the name of the Twilight vampire matriarch, too. Mrs. Squalor turns out to be a baddie, but her name is a rising favorite. In fact, it’s leapt nearly 300 spots in the last three years alone.

Fiona brings to mind the ogre princess of Shrek fame, but it’s also among the Baudelaire baby names. She’s another whipsmart kid who adventures with the siblings, though she’s not necessarily a hero.

Even though Friday serves as a minor character towards the end of the series, I just love this name. Presumably she’s named for her father, Thursday, though it might also be a reference to the Robinson Crusoe character, since she lives on an island. More literary fun: her surname is Caliban, and she’s the daughter of Miranda. Shades of The Tempest, anyone?

Just a little longer than popular Georgia, with plenty of use over the years, it’s easy to imagine Georgina catching on with parents today. In the Lemony Snicket universe, she’s an optometrist – and a villain. Her full name is Georgina Orwell, which refers yet another novelist: George Orwell, of 1984 fame.

Hal arrives late in the series, the eighth guardian for the Baudelaire siblings. In the books, he’s ancient-old, while the television series makes him merely garden-variety old. His full name is unknown, though Hal is often short for Harold, and sometimes Harry. Since Jack and Max are favorites for boys, Hal might be ready to leave the retirement home for the nursery, too.

When we first meet Hector, he’s the village handyman, and a talented inventor. He ultimately proves himself heroic, even though his actions fail to save the Baudelaires. Is this another literary reference? I’m not sure, though in Greek and Roman myth, Hector is a warrior prince of Troy.

Hugo is a hunchback, another member of the Caligari Carnival, and ultimately an ally of Count Olaf’s the series chief bad guy. It’s an interesting choice of name, though, almost certainly inspired by Victor Hugo, author of The Hunchback of Notre Dame.

Isabella reigns, a long-time Top Ten favorite for girls in the US, while the similar-sounding Isadora languishes outside the Top 1000. It could make a great stands-out/fits-in choice, but it makes this list thanks to Isadora Quagmire. She’s Duncan’s sister, their names inspired by the the modern dancer Isadora Duncan.

I mentioned that Lemony Snicket is both narrator and participant in the stories. We also meet his family in some of the books, including older brother Jacques. Jacques sounds like Jack, but it’s the French form of James. (Remember how James and Jacob are forms of the same name? Confusing, but true.) Jacques probably reads more Cousteau than Baudelaire in the US, but it’s still an interesting import.

Another temporary guardian for the siblings, Aunt Josephine lives in a house perched on the edge of a cliff, in danger of falling into Lake Lachrymose below. It’s a name that feels both classic and current, rich with nicknames and a lot of style, too. The fact that it’s heard in this quirky series? Just a bonus.

Yet another member of the Snicket family, Kit is Lemony’s sister. In the books, she shows up pretty late in the series. It appears to be her full name, though most Kits are probably short for Katherine or Christina. (Or, in the case of boys, Christopher.) It’s never been big as a stand-alone name in the US, but I think it works nicely for a son or a daughter.

American parents have been all about the traditional Nicholas, but Klaus and Claus? Not so much. Still, it’s the name of the only Baudelaire brother, so I couldn’t leave it off this list. His name may have grim inspiration indeed – Claus von Bülow was tried for the attempted murder of his wife, Sunny.

Lulu turns out to be an alias in these stories, but I think it fits with the Baudelaire baby names quite nicely. In the series, Madame Lulu pretends to tell fortunes, but actually relies on her enormous research library. She helps the Baudelaire siblings at one point, but she’s not all good. While Lulu is more nickname than given name today, it could easily catch on with all of the longer Lou- and Lu- names so much in favor.

Dr. Montgomery Montgomery serves as the Baudelaires’ second guardian, and he’s the best of the bunch. A renowned herpetologist, his house is packed with snakes, including the Incredibly Deadly Viper, which is actually quite tame. Uncle Monty ends badly, but his name? It’s on the rise. Though it’s still outside of the US Top 1000, today it feels dashing and unexpected, but right at home with so many surname names for boys.

From Shakespeare to Snicket, writers love this name. In the stories, she’s part of the Caliban family and the owner of the Caligari Carnival. She’s best known as Madame Lulu, a not-psychic psychic, and sometimes ally of the Baudelaires. As baby names go, Olivia tops the charts. It’s just plain fun to find this popular choice in such an intriguing series.

Molly has been steadily popular in recent years, while Polly has been left to nursery rhymes and doll names. There are two characters by the name in A Series of Unfortunate Events, but neither seems likely to help Polly reverse course. In fact, Polly Poe is written out of the Netflix series. Still, this former nickname for Mary could wear well in our age of Sadie, Millie, and Hattie.

Strictly speaking, Sir is not a character’s name. But it’s the only thing we ever call the owner of Lucky Smells Lumber Mill. He’s yet another of the Baudelaire orphans’ obnoxious guardians. I mention it, of course, because Jay Z and Beyonce named their only son Sir, sending interest in the not-quite-name sky high. While it fits with current trends, I’m still doubtful that this one will catch on.

The youngest Baudelaire sibling is baby Sunny. She can’t speak – at least, not in English as we know it – but those that can understand her realize that her thoughts are quite sophisticated for a toddler. She routinely contributes far more than her age would suggest. As a given name, Sunny saw some use in the 1970s, but generally feels more like a nickname than a given name today. Still, it is one of the Baudelaire baby names, and that could be just enough to encourage some parents to see it as complete.

The eldest of the Baudelaire siblings, charged with taking care of Klaus and Sunny, Violet is clever and brave. A gifted inventor, her contraptions often feature in the plots of the stories. She’s also the only one with a mainstream given name. While it’s hard to imagine Violet required a boost, it’s possible that Lemony Snicket will do just that, transforming this name from Downton Abbey’s Dowager Countess to a storybook choice for a daughter.

What are your favorite Baudelaire baby names? Are you a fan of the series? What have I missed? 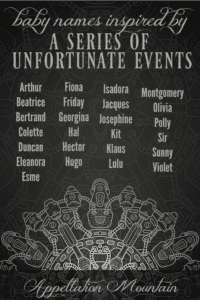