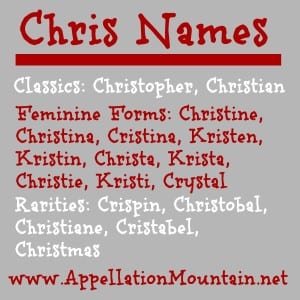 From Columbus who sailed the ocean blue to Fifty Shades of Gray, plenty of men have answered to some form of a Chris name.  And, thanks to Kris Kringle, it’s a name associated with the Christmas season, too.

Chris names aren’t just for boys – never have been.  And the twentieth century was huge for all things Christopher and company.

Thanks to Lisa for suggesting our Christmas week-friendly feature for today: Chris names.

In Greek, khristos means anointed.  It’s the equivalent of the Hebrew word messiah.  Both are titles given to Jesus of Nazareth.

Most of us would probably consider Christopher a classic, and a popular saint’s name, too.  The original St. Christopher story is probably more legend than fact, but the meaning has appealed to people of faith for generations: Christ-bearer.

K spellings – Kristopher, Kristofer, and Kristoffer – all fared well during the height of our affection for Christopher.

That translates to an awful lot of boys answering to Chris.

As Christopher rose, another of the Chris names caught on: Christian.

Originally gender neutral, Christian is solidly a boys’ name today.  And while Christian might seem overtly religious, it isn’t perceived that way.  Now that it’s the name of Fifty Shades bad boy Christian Gray, it seems even less connected to the spiritual meaning.

Christian has never quite caught up with Christopher – and both names slipped slightly in 2013 – but somehow, Christian feels like slightly more current in 2015.

Chris Names: For the Girls

If boys are pretty much limited to Christian and Christopher, there are many more Chris names for girls:

All of the Chris names covered so far have been pretty common – names that you wouldn’t be surprised to see on a business card or birth certificate.  But how ’bout some rare Chris names?

Along the way, many Chris names have shed their Chris sound.