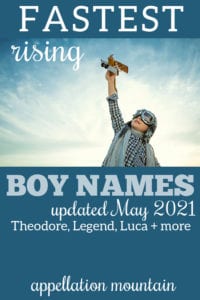 But there’s another way to look at the numbers, and that’s by an increase in actual births from one calendar year to the next.

After all, near the end of the Top 1000, a small increase in the number of births can translate to big gains in the rankings. Samir climbed from #693 to #647 … but that’s still only an additional 50 births over calendar year 2019.

But when you’re talking about the Top 100 and even Top Ten? Names can actually fall in use, but still dominate the charts.

Nine out of the Top Ten boy names actually fell in use – it’s just that nothing has risen yet to take their places.

So looking at these numbers can help us guess which choices might continue to power their way up the popularity lists in the next few years.

One of those epic boys, almost too big to wear but increasingly mainstream, Legend has gone from out-there word name to fast-rising favorite.

Hayes picks up where Hayden left off, and follows Brooks up the charts.

A Miles alternative made even more familiar by early colonial settler Myles Standish.

A Cal name long popular elsewhere in the English-speaking world, but increasingly catching on here.

Take Top 100 favorite Miles and mix in a scoop of Leo for this appealing choice.

A surname name alternative to Hunter and Jackson, one with strong ties to New York.

A Spanish import with easy charm, Gael has become an established favorite in the US over the last two decades.

A cool, edgy sound and a famous fictional character put Maverick on parents’ radar. Maverick is a name with swagger to spare, but now that it’s a Top 100 favorite, it’s also an increasingly wearable choice, too.

Preppy and polished, rugged and down-home, all at the same time.

A Hebrew name with an appealing meaning: God is my strength.

An o-ending favorite boosted by an animated dinosaur, could Arlo be the next Leo?

We love long names for boys, like Sebastian and Oliver. And we’re wild for Italian and romance language names, too – just look at the next name on this list. No surprise then, that the Italian form of John is on the rise.

With a new Pixar flick titled Luca on the way, this name could rise even more in 2021. But it’s already shot up the popularity charts recently.

In a year defined by a lack of travel, is it a coincidence that map-centric Atlas captured parents’ imaginations?

A bright and brief name, Beau means handsome, but it sounds capable and cool.

A gentle nature name, the tragic 1993 death of River Phoenix put this name on parents’ list of possibilities. But it was many years later that this name became a blockbuster hit.

A Star Wars name that shares sounds with past favorite Kyle and current style star Milo, Kylo is back in the spotlight this year, reaching an all-new high.

A surname name for a soldier, Archer is quickly joining other -r ending names near the top of the popularity charts.

An Old Testament name with a powerfully stylish sound.

Larry is stuck in style limbo, but Enzo is white hot. Both names comes from Lawrence, Enzo via the Italian Lorenzo. Credit the o-ending and high value Scrabble letter Z.

An alternative spelling for Luca, another name on this list.

Classic names do cycle in and out of fashion, and right now? Theodore is the classic boy name cycling back into favor fast.

An unusual name made famous by legendary athlete Kobe Bryant, and pushed to the top of the chart by his tragic passing early in 2020.

What are your favorite of the fastest rising boy names? 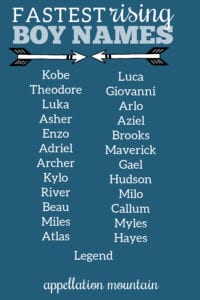