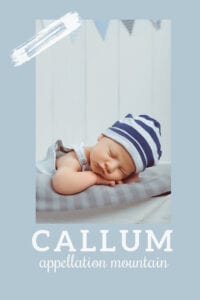 The baby name Callum caught on in the UK long before American parents discovered it. But lately it’s among the most stylish of boy’s name possibilities.

Thanks to Bella for suggesting our Baby Name of the Day.

A handful of early saints – male and female – answered to Columba. It comes from a Late Latin name meaning dove, but it’s not quite in the same category as Leo or Wren.

Instead, the dove signifies the Holy Spirit, making Columba a deeply spiritual choice.

It became Colum and Colm in Irish and Calum and Callum in Scottish, along with a few other variations. At least occasionally, the names were Anglicized as Colin.

While there’s more than one saint, the best-remembered lived in the sixth century. Irish by birth, he led a mission to evangelize the people living in Scotland. It’s said that Saint Columba was successful in his efforts to spread his faith; it’s also said he wrestled the Loch Ness monster.

There’s no question that some of his feats were true. He founded a monastery on the island of Iona and has been widely revered, into present-day Scotland.

In any case, a popular saint tends to boost a name’s use, and that’s certainly true for the baby name Callum.

Even parents who aren’t particularly religious might appreciate the baby name Callum’s rich symbolism and meaning.

The night sky includes a faint constellation known as Columba, because it resembles a dove. It’s only been named since the sixteenth century – which helps explain why it references Christianity rather than ancient myth.

Some sources called it Noah’s Dove, which makes it a symbol of hope. In the Old Testament story, the dove returns bearing an olive branch, signalling that the flood waters are receding. That makes it a powerful symbol of hope.

Doves, of course, are richly significant outside of a Christian context, too.

Most often, the bird represents peace. They’re depicted on Christmas and holiday cards, and Pablo Piccaso’s Dove of Peace is among the artist’s most famous works. (Fun fact: Picasso named his daughter Paloma, the Spanish word for dove.)

That lends the first name Callum a powerful and compelling meaning.

You might find Callum listed as a variant of Malcolm.

That’s not quite right.

Instead, Malcolm means “servant of Columba.” From Scottish kings to Malcolm X to Canada’s bestselling author Malcolm Gladwell, it’s a name that’s been heard across the years.

Call it a cousin to Callum. But if Malcolm is a quiet classic, Callum is the stylish choice for a baby boy today.

Another reason to think the baby name Callum might wear well on a son today?

We’re wild for Cal names. There’s Caleb and Calvin, of course, but also Callahan and Callan/Callen. Charles could easily shorten to Cal, too.

Similar sounding names like Colm and Colum aren’t often heard in the US, but you might come across them in Europe.

The last name Callum or MacCallum is sometimes heard, too.

In the late 1990s and early 2000s, the baby name Callum ranked in England’s Top 25. It reached the Scottish Top Ten in the same era. And it enjoyed Top 100 popularity in both Ireland and Northern Ireland, too.

So if you meet a Callum today in the UK? He’s probably a teenager or a young adult.

But it too much longer for the baby name Callum to catch on with Americans.

The name first debuted in the US Top 1000 in 2008 – after it had reached its peak across the Atlantic. (As well as in New Zealand and Australia.)

Despite getting a late start, there’s no question that the name has caught on. In 2008, the baby name Callum came in at just #972. As of 2021, it rose to #273 – an all-time high. That’s not Liam or even Carter, but it’s a respectable rank, firmly in the familiar-not-overused category.

Most famous Callums aren’t well known in the United States. Soccer players like Scotland’s Callum Davidson and Callum MacGregor or England’s Callum Robinson and Callum Hudson-Odoi pop up in a Google search, but they’re not quite household names. Other athletes answer to the name, too.

But because Callum is an increasingly popular name in the US, that’s starting to change – slowly.

While plenty of borrowings from across the Atlantic now feel thoroughly American – Liam, I’m looking at you! – the baby name Callum still feels like a bit of an import. It’s more of a Mini Cooper than a Ford Mustang – polished, familiar, but some of the name’s appeal is that Scottish heritage.

The baby name Callum also feels easy-going. It’s a relaxed name. On a playground of Mavericks and Wilders, Callum is far more understated. It’s a brother for Arlo, an alternative to Dylan.

And the meaning? It’s a total bonus.

If you’re after something that’s just slightly different, with modern appeal and deep roots, the baby name Callum is one to consider.

What do you think of the baby name Callum? 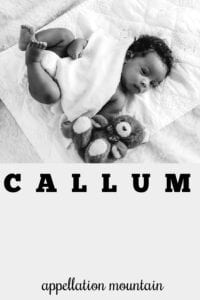 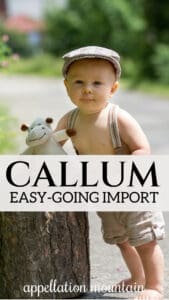