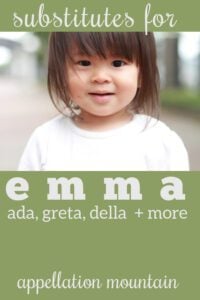 Emma has ranked in the US Top Ten since 2002, sitting at the very top of the list many of those years.

That makes it part of the elite sorority of #1 names for girls.

A powerful combination of classic style and pop culture propelled the name to the top, beginning in the 1990s.

That’s the decade when Gwyneth Paltrow played Jane Austen’s iconic heroine. Ross and Rachel gave the name to their daughter on Friends. No surprise we all fell for the short, strong name.

But it’s not the only possibility with a similar sound. Lots of names share Emma’s literary pedigree, too.

Of course, there are plenty of good reasons to use a very popular name – yup, even the #1 name in the US.

Ada Lovelace makes a talented namesake. Both Ada and Emma sound capable, the kind of names that wear well on children or corporate executives.

But there’s something else the names have in common: a certain sweetness, maybe. They’re equally at home in the nineteenth and twenty-first centuries alike. Climbing quickly in recent years, Ada might replace Emma in more ways than one.

The Last of the Mohicans makes Cora literary. Downton Abbey’s dignified, but warm Lady Grantham, played so masterfully by Elizabeth McGovern, boosted this name, too.

Plenty of Cora names – like Cordelia and Coraline – have commanded the spotlight years. But for simple sophistication, nothing beats Cora.

Della recently returned to the US Top 1000 after many years’ absence. With choices like Delilah and Ella so stylish, it fits right in.

Elaborating Emma to Emmeline might feel like cheating. Or maybe it’s just different enough. Emmalyn outranks Emmeline, and Emilia appears in the current US Top 100. So there’s more than one Em- name to ponder.

But Emmeline makes this list because of the name’s vintage charm, including pioneering women’s suffrage leader Emmeline Pankhurst.

Most of the names like Emma share a two-syllable, ends-in-a pattern. Esme breaks the mold, sound-wise, but it retains many of the same qualities. JD Salinger made Esme literary. And while the sound is more complex, it’s still short and complete.

Emma’s strength lies in the name’s ability to be flexible and nickname-proof at the same time. I think the same is true for Greta. At first glance, Greta is a little girl’s name, charming and innocent. But Greta Garbo lends it some serious sophistication. And really, any name derived from classic Margaret feels strong.

With Layla and Lily so popular, lots of names sound like Lila. And yet the name offers so much.

Lila claims roots in Sanskrit and Arabic, but sounds very much at home in the US. If you’re torn between the traditional Emma and names with more pan-global flair, Lila might satisfy.

Worth noting: Lyla now ranks #118, making it the most popular spelling.

The first First Lady name last appeared in the US Top 100 in the 1960s. But Emma cooled in the 1950s, and followed a similar decline in use in the 1960s and 70s. So why couldn’t Martha also reverse course?

As with so many names like Emma, the reason Martha makes the list is that antique appeal. We never tire of reviving vintage names. And Martha also belongs to many an accomplished woman, making it just as wearable as Emma.

There’s something energetic about Thea. With Theodore and Theo rising fast for boys, no surprise that this feminine form – along with Theodora – is also attracting attention. But just like Emma, there’s something about Thea that feels timeless, too. Thea might be an early aviatrix … or maybe the name of the next space flight commander at NASA.

I mentioned that names like Emma might be literary. American author Willa Cather more than satisfies that measure. Like Ada, Willa also shares a gentle, vintage vibe, without sacrificing any strength.

In an age of Stella and Willow, this name seems like an obvious choice to gain in use. And, indeed, Willa has doubled in use over five years.

Vintage Vera offers two appealing meanings – faith and truth. Sound-wise, it’s quite current, a mix of the best qualities of Violet and Emma. No surprise it’s rising, and yet Vera remains uncommon enough to satisfy parents looking for names like Emma … but not quite as popular. Yet. 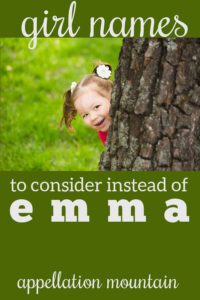