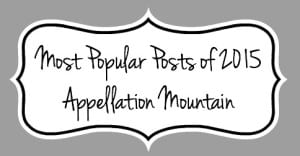 Yesterday we looked at the most popular baby name posts of 2015. Leo and Lena led the pack, with lots of surprises mixed in. It’s always fun to look at those numbers, plus it’s a fun preview of March Madness Baby Names 2016, which will be here before we know it!

Today, let’s look at the most popular posts from 2015, and make sure to read all the way to the end – I’ve got a fun announcement coming up, too!

Most Popular Posts of 2015: Advice and Analysis

None of my advice posts make it into the Top Ten, but some are very popular. Here are the Top Three:

Most Popular Posts of 2015: Miscellany

And now, an announcement …

Beginning in February, the schedule will look like this:

I’m a little nervous about losing a space for a featured name post, so I’m going to consider this a trial run through the end of March.

And with that, let’s get welcome in the New Year! I’m excited about what’s ahead in 2016, and so very grateful that each and everyone of you is here for the journey.