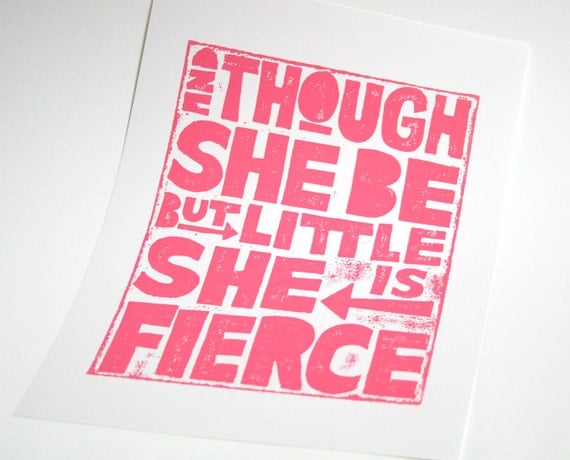 Back in December, a conversation with a friend prompted a post called The Hermiones. Midway through writing it, I realized it was a two-parter.

Hermiones are names that are vintage, but not delicate, and clunky, but still cool, inspired by J.K. Rowling’s heroic character.

The comments in the original post were amazing – lots of great ideas, most of which were already on this list.

I also loved this quote from punkprincessphd: ” … let us *raise* our daughters to be Hermiones, and don’t just stop at naming them such. But to go one step further, I wouldn’t mind if my daughter was a little bit Katniss, too.”

Here’s the long-awaited second half!

Maeve – She’s a much-married warrior queen who picked fights – and won them. Unlike many an Irish import, her spelling and pronunciation are straightforward – plus any name that ends with “v” has a definite edge.

Maud – She’s slightly softer than Maeve, but her origins are a Germanic appellation meaning might in battle. Though Maud and Maude have been worn by plenty of princesses, she’s decidedly frills-free.

Minerva – She was the Roman goddess of wisdom – and the first name of Professor McGonagall, an ally of Harry, Ron, and Hermione in the series. She’s clunky appellation that’s not on anyone’s radar today, though Minnie makes Nameberry’s list of Hipster Baby Names.

Nora – Probably the most popular name on this list, one famous Nora was a happily-married Hermione figure, thanks to Dashiell Hammett’s bestselling novel The Thin Man and the movie adaptation starring Myrna Loy. Husband-and-wife detective team Nick and Nora Charles were equal partners in crime-solving and life. Find Nora too popular? There’s the regal, Arabic Noor, too.

Octavia – You’re more likely to find her in a museum than on a playground. Despite that pretty -ia ending and musical associations, Octavia is definitely a Hermione. She’s an old Roman family name worn by legendary sci-fi writer Octavia Butler. Add in that eight is considered a lucky number in many cultures, and Octavia would be right at home on a heroine.

Ottilie – She’s a feminine name related to the Germanic Otto, surely a clunky cool pick for boys. The same name-family gives us Odilia, a seventh-century Alsatian saint, as well as Odette and Odile, the swan princess and her black swan rival. Like Hermione, Ottilie is offbeat, never-mind-the-mainstream different – in a good way.

Penelope – She shares the same rhythm as Hermione, a series of unexpected sounds that somehow work together. As if Odysseus’ clever wife wasn’t enough of a namesake, the 2006 Christina Ricci movie made the name flat-out admirable. Nicknames abound, and a few of them, like Nell, could qualify as Hermiones on their own.

Portia – Another literary appellation, Shakespeare’s quick, clever, and kind heiress in The Merchant of Venice puts Portia on this list. Parents who know their Latin might give her a miss because she’s derived from the word for pig. Those who don’t could still object to her similarity to the luxury sports car manufacturer. But if Jessica can be such a hit in the 1980s, why couldn’t you just retort, “No, not like the 911. Like Shakespeare!”

Ramona – Actors Maggie Gyllenhaal and Peter Sarsgaard surprised us when they gave this name to their daughter in 2006. Popularized by a nineteenth century novel, today’s parents probably think of Ramona Quimby, the exuberant little sister who eventually takes center stage in Beverly Cleary’s children’s books. She’s imaginative, destructive, and incredibly appealing – in her own way, very much a Hermione.

Rosamund – She’s nearly as rare as Hermione, a medieval name worn by an ill-fated princess and a king’s mistress. While her association with the Latin phrase rosa mundi implies a fleeting prettiness, her sound is downright different – the kind of mix of the beautiful and the heavy that defines a Hermione.

Sigrid – Steadily popular in Norway, and the source of Apple’s appellation Siri, Sigrid comes from Norse elements meaning victory and beautiful. While her sound is harsh, it has the same gruff appeal as Ingrid or Greta. There’s something exotic, but still no-nonsense about Sigrid. Another possibility is the similar Signe.

Thora – Suggested by Natalie in the comments from Part I, Thora definitely deserves a place on the list. A feminine form of the Norse god Thor, literally meaning thunder, Thora’s sound is sharp and distinctive. Worn by a queen in Norse myth, indie actor Thora Birch has helped put this rarity on the map.

Theodosia – Her Greek roots are evident. Sometimes heard in the nineteenth century, Theodosia sounds like Hermione’s kid sister. She reminds me of Nameberry’s post on “a lotta name” – choices like Henrietta and Feodora that are almost too elaborate to wear. Still, Theodosia seems just on the right side of clunky-yet-manageable, thanks to short forms from the glamorous Theda to the sweet Teddy.

Ursula – Yes, she’s the scheming sea witch who makes a deal with the Little Mermaid. And she’s Phoebe‘s evil twin on Friends. But she’s also derived from the Latin for bear, making her a bold choice for a daughter. A legendary princess-saint led an ill-fated pilgrimage to Rome somewhere between the third and seventh centuries, depending on the account. If you’re willing to overlook the pop culture associations, she’s a strong, noble choice for a girl.

Vera – With connections to the Russian word for faith and the Latin for truth, Vera is the kind of choice that shines with significance. Oscar Wilde gave the name to a Russian barmaid turned assassin in an 1880 play. Now that sitcom Alice is fading from our memories, Vera is no longer a ditzy diner waitress. Instead, she’s reclaiming her space as a strong name for girls.

Wilhelmina – Willa is the Americana literary pick embraced by Keri Russell, but Wilhelmina is the Hermione on this list – elaborate, feminine, but still not frilly. While she’s almost certainly answer to Billie or Wil, the full name is rich with regal associations. A capable appellation, but one seldom heard today.

While this is the last installment in the Hermiones list for now, I do have another post up my sleeve, inspired by the punkprincessphd quote – and by many of the names that were just a smidge too modern to qualify for this list.

Are there others that you would suggest?