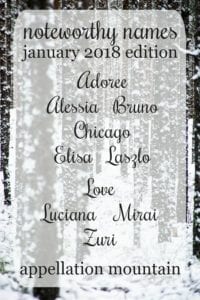 These are the Noteworthy Names January 2018 edition.

Back in 2016, I shared lists of Noteworthy baby names every month. Somehow, I stopped compiling those – but I miss them so much! And so, they’re back …

The names come from everywhere – pop culture, the headlines, even #namespotting in my regular ol’ life. It’s a good chance to reflect on what we’re all hearing, out there in the wild, even if the names don’t translate into The Next Big Thing.

But name-watching tells me that at least some of these will have an impact on what at least some of us name our children in the coming months and years. (Okay, well maybe not the iHop server, because that’s just me. But it’s an interesting story anyhow.)

On to the Noteworthy Names January 2018!

Spotted in an iHop.

I took my son to a doctor’s appointment way on the other side of everything. It’s a long morning, and still rush hour when his appointment is done, so we stopped at iHop rather than sit in traffic. Our server’s name was Adoree, but she pronounced it Adory. Like A + Dory. Instead of the Franglais ah-duhr-AY I was expecting.

Did her parents assume Adoree sounded like Adory? Or did years of mispronunciation convince her to Americanize it? The restaurant was packed, so I couldn’t ask, but I’m so curious! Also, I think Adoree would make a gorgeous middle name, and belongs on this list. It appears on plenty of baby names websites, and an early twentieth century French dancer used the stage name Adorée Villany. So it’s out there – but I’ve never heard it before!

I’ve been watching Alessia for a while. First, it feels just slightly familiar, since it’s an Italian cousin to Alexandra/Alexia/Alexis. And, of course, it fits right in with so many romantic, liquid names for girls, the Arianas and Lucias and Olivias and Siennas.

But the reason it makes the Noteworthy Names January 2018 list is Alessia Cara, who took home the Grammy Award for Best New Artist. She joins singers like Cyndi Lauper, Mariah Carey, and Alicia Keys who have all won in years past. 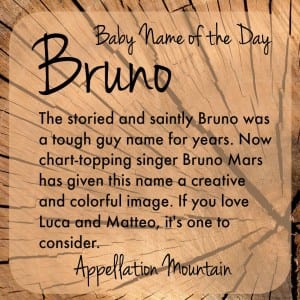 While we’re at the Grammy Awards, let’s talk Bruno Mars. He won big at this year’s awards show. It’s a stage name – he was born Peter Gene Hernandez, but got the nickname as a child because he resembled professional wrestler Bruno Sammartino.

It’s an interesting name, and while Mars come to mind first, he’s far from the only. Besides the singer and the wrestler, there are dozens of notables. Lewis Carroll penned a little-known tale called Bruno and Sylvie; actors, athletes, politicians, fictional characters, and more all belong on the list. I counted at least five saints by the name, too. Bruno feels a little bit tough-guy, nicely pan-European, and powerfully creative. It’s also just slightly under-the-radar, ranking in the mid-600s right now. 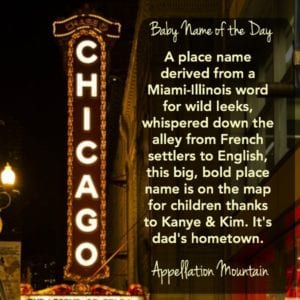 The first major celebrity birth announcement came in January 2018, with the arrival of Kim and Kanye’s third child. The pair named their daughter Chicago after dad’s hometown. It just plain wasn’t considered a name prior to this year, and I suspect it’s more in the Apple-Suri-North class than the Willow-Ava-Emerson category. This one belongs to the Kardashian-West family almost exclusively.

Still, it’s worth considering which fresh, new place names might be on the verge in 2018 and beyond. And it makes me even more excited for the rest of the Kar-Jenner name reveals!

Elisa is yet another Elizabeth name, and one in steady use in the US. It’s ranked in the Top 1000 pretty much every year since 1880. And yet, it’s far less familiar than Eliza, Elise, or even Elsa. Could that change? Based on the name’s liquid sound, it could benefit from just a little more exposure thanks to the film’s success. It’s worth noting that Guillermo del Toro’s 2006 movie, Pan’s Labyrinth, deserves credit for slowing changing parents’ perceptions of Ofelia.

The movie is packed with great names – Elisa is aided in her quest by Giles and Zelda. 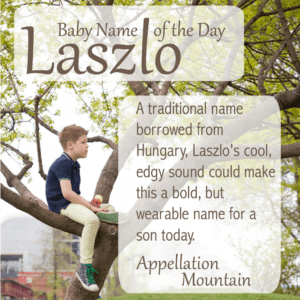 Are you watching The Alienist? It’s dark and gory, but there was so much buzz around the TNT limited series that I had to watch. (It’s based on a novel by Caleb Carr.) One of the main characters is an early criminal psychologist – an alienist, by 1896 New York City parlance. His name is Dr. Laszlo Kreizler, born in Europe to a German father and Hungarian mother. It’s that last fact that explains his distinctive name – Laszlo was a saint and King of Hungary in the eleventh century. It remains a favorite there today.

But lately it’s been popping up more and more often in pop culture. Chance the Rapper recently did a Saturday Night Live sketch as Lazlo Holmes, a sports reporter reassigned from basketball to ice hockey. (Hockey fans, this is SO worth a watch!)

Plus, Pete Wentz, dad to Saint Lazslo – nope, that’s not a typo – is expecting another child, which will doubtless put his daring baby name choices in the spotlight.

As for s/z/sz/zs debate? I suspect that American parents might opt for the simplified Lazlo spelling, if only because it leads to the oh-so-cool nickname Laz.

Terrence Howard named his son Qirin Love, and this generation of parents grew up with Jennifer Love Hewitt. (As a child actor, Hewitt was sometimes credited as “Love Hewitt.”) And it’s been used in small numbers for years and years, especially for girls, but not exclusively.

But the name makes the list in January 2018 thanks to the Kardashians. As we waited for Kim and Kylie to welcome their daughters, rumor had it that they were squabbling over the baby name Love.

No word on whether the sisters really did duke it out over the short, sweet, and simple word name or not, but we know that Kim went a different direction. As of this writing, we’re still waiting for Kylie’s big name reveal, but rumors have moved on. (My guess of the moment: Posie, as in one of Kyle’s LipKit product names.)

It does sound like the kinds of names favored by reality stars: Reign, Dream, Saint. Short, powerful word names that aren’t quite names. And yet lots of parents are into this style these days, so it’s easy to imagine Love making it to the top of more parents’ lists of favorites – especially as a meaningful middle.

Luciana Vega is American Girl’s newest Girl of the Year, and she’s awesome! NASA collaborated on the doll and her story – she’s an aspiring astronaut, and the reason my daughter is asking about space camp all of a sudden. But, naturally, it’s her name that has me curious.

American Girl prides themselves on getting the details right, whether they’re for historical characters or modern ones. And their Girls of the Year do tend to have names you’d expect to hear on a contemporary child: Gabriela, Isabelle, Saige, McKenna, Mia, Grace. But Luciana seems slightly different. The name nods to the character’s Chilean heritage. But it also represents a rising name, rather than an established favorite.

Except for a few years in the 1970s, Luciana didn’t appear in the US Top 1000 consistently until 2006. The name has only ranked in the Top 500 since 2014. Given our love of long names for girls, and picks like Lucy, Luna, and Louisa, Luciana could soar as a result of the new character.

Mirai Nagasu could be The Next Big Thing if she brings home a figure skating medal in the 2018 Winter Olympics. She came close in 2010, placing fourth at the age of 16. Nagasu missed the Olympics in 2014, but now she’s back. The California native was born to Japanese immigrants. Her name means “future” in Japanese.

But Mirai also sounds like the French Mireille, which means “to admire” and reminds me of 1960s favorite Renee, and maybe a little bit like Marie and Esme, too.

The great meaning, the appealing sound, and the possibility that an Olympic medalist might put it on more parents’ radar? All reasons to watch Mirai. 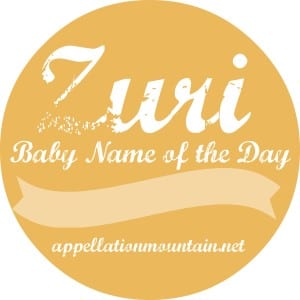 The latest trailer for Black Panther dropped in January 2018, and the buzz? It’s deafening. Ticket pre-sales have set a record, surpassing all other superhero movies to date. Plenty of names might get a boost from a successful story: Chadwick, as in the leading man, Chadwick Boseman. Shuri, Nakia, and Ayo – all female characters – might be worth watching, too.

But the one that caught my eye was Zuri, played by Forest Whitaker.

That’s because Zuri has become a fast-rising favorite for girls. But it actually started out as a boy’s name, back in the 1960s and 70s. Patti LaBelle named her son Zuri in 1973. Boxer Zuri Lawrence was born a few years earlier.

Could this one be reclaimed for Team Blue? I don’t known enough about Whitaker’s character to guess, but with names leaping off the big screen – Kylo, I’m looking at you – never say never.

That’s my list of noteworthy names January 2018 edition. Are there any names that have caught your eye lately?