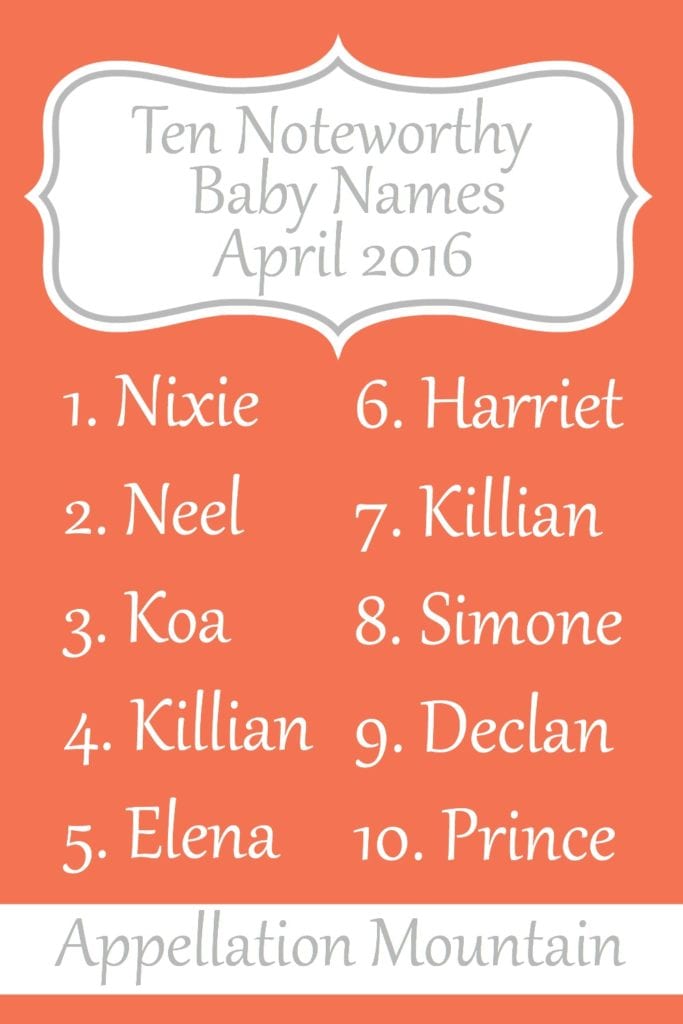 If you’re new here, this series details the ten names that caught my eye the month before. Pop culture influences abound, but good ol’ stats about the most-viewed names here at Appellation Mountain play a part, too.

You can read all of the 2016 Noteworthy Baby Name posts here.

Or you can bravely forge ahead and see which shiny new names caught my magpie-like attention this month.

Read on for the noteworthy baby names April 2016!

Nixie – I’ve always appreciated the names that Chad Lowe and wife Kim chose for their daughters. First came Mabel Painter – Painter is Kim’s maiden name. Second daughter is Fiona Hepler – Hepler is Chad’s mom’s maiden name. But with both families honored, the couple went a little wild – or at least outdoorsy – for daughter #3. Her name is Nixie, more typically associated with water sprites than Hollywood birth announcements. But Nixie is rich with meaning for Chad and Kim. The couple love surfing, and are involved with environmental issues. A bonus? Nixie’s birth date makes her a Pisces. Nixie is one-part Alexa and two-parts Sadie, an irresistible mix of retro nickname and the letter x, with a healthy dose of nature name thrown in.

Neel – Disney’s live action remake of The Jungle Book is a huge hit. The young actor who plays Mowgli is newcomer Neel Sethi. He’s American, of Indian heritage, and Neel is a Hindi name meaning blue. It’s also a strong potential crossover name, since Neil and Neal have plenty of history in English. While they’re slightly dated in 2016 – Neal peaked in the 1950s and Neil in the 1930s – I think the sound works well today, and belongs on a list of noteworthy baby names April 2016.

Koa – While we’re talking about culture-crossing names for boys, how about Koa? It’s one letter away from chart-topping favorite Noah, but it’s not just some creative twist. Instead, Koa is a nature name from Hawaii, borrowed from a tree. Koa is still outside the current US Top 1000, but the post on this name is regularly among the most-viewed boy names on Appellation Mountain. Definitely one to watch.

Elena – What’s the difference between a name that rises and one that really catches on? Sometimes it’s pop culture. And the use doesn’t have to be huge for the name to get a boost. No one considers Nash Bridges a classic, but it definitely put the boy’s name Nash on our radar. Now, Disney’s newest princess is Elena of Avalor. She’s Latina, and she’s coming to Disney Junior this summer. Elena currently stands at #121 in the US. Could Elena be the new Isabella?

Killian – While we’re on Disney-influenced baby names, when did Captain Hook did a different first name? ABC’s super-successful Once Upon a Time has reinvented all sorts of fairy-details over the last five seasons, but I missed this one completely. They renamed James Hook! He’s now Killian Jones, nicknamed Hook because of his hand. The character debuted in late 2012, during Once’s second season. Killian has surged in use since then, rising from #818 in 2012 to #516 in 2014. I’m expecting another big jump when we see the name stats in May.

Declan – Up until I realized the whole Hook-Once-Killian connection, I’d attributed Killian’s rise to our love of Irish names and ongoing interest in successors to Ryan and Aidan. That’s not the case with Killian necessarily, but it is true with Declan. While there have been a few fictional characters by the name, this one is catching on mostly thanks to style. It was one of the most-viewed baby names on Appellation Mountain last month.

Ruth – Okay, one more with a Neverland tie, then I’ll move on, promise. Canadian singer-songwriter Ruth B. scored a hit with “Lost Boy,” a song all about Peter Pan and company. It started out as a vine, but it’s now gone mainstream. Ruth was up to #315 in 2014, making it too popular for this list of Tailored Names for Girls. But I still think it’s perfection for parents disappointed that Claire and Grace are so popular.

Prince – So many months, the passing of a major cultural figure has influenced a name on this list. For noteworthy baby names April 2016, it has to be Prince. While the singer was known for a certain extravagant style, the name Prince wasn’t part of his persona. It was his birth name – Prince Rogers Nelson. In interviews, his father talked about choosing the grand name for his son with hopes that he would achieve great things.

Harriet – Speaking of achievement, the US Treasury Department pledged to put an accomplished woman on the face of US currency. Except they’d offered up the $10 bill, right before Alexander Hamilton became the unlikely subject of a smash Broadway hit. Now Harriet Tubman – who won the popular vote – will move to the $20 instead. It’s a fascinating conversation, but my main interest is purely onomastic. Will Harriet re-enter the US Top 1000? I feel like this name is overdue. It last appeared in 1970!

Simone – Let’s end with a mix of celebrity baby name and pop culture reference. The Nina Simone biopic is in theaters now, which might turn more attention on the legendary singer’s life – and gorgeous name. John Legend and Chrissy Teigen recently welcomed daughter Luna Simone. Since Legend is known to admire his fellow singer, it’s a safe bet that the middle is an honor name – and a stunning choice for a daughter.

Have any names caught your eye recently?