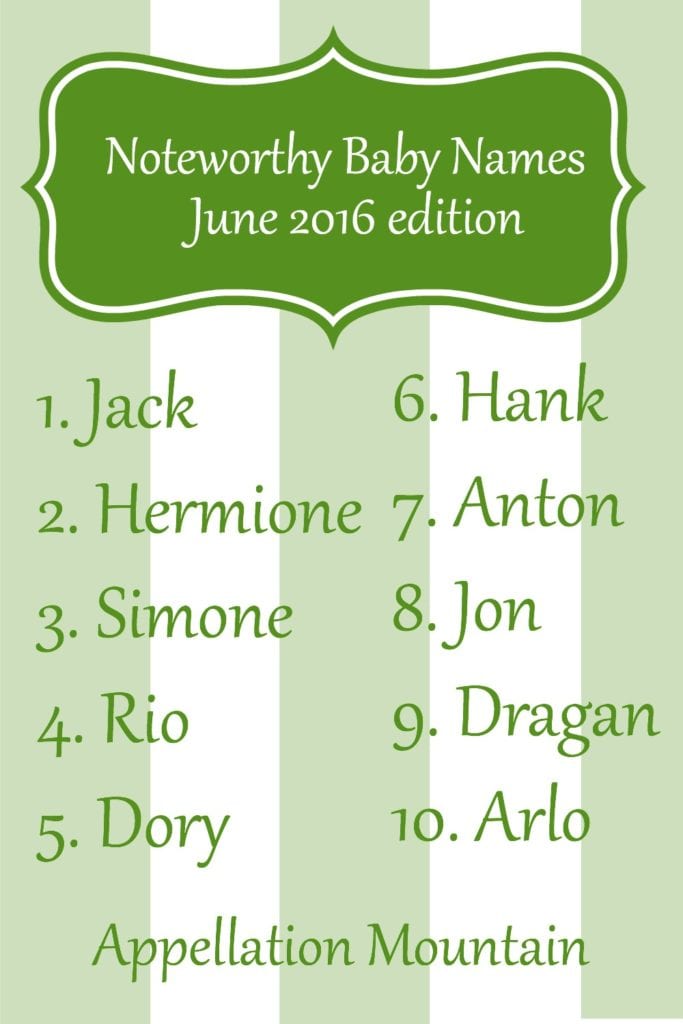 The noteworthy baby names June 2016 blend the current with the could-be, sad stories and triumphant ones.

We know that nearly anything that leads to more discussion of a name can also lead to greater use of that name. Or not. It’s a quirky business, figuring out which ripped-from-the-headlines choices will succeed Phoenix and Luna, and which will just fade into the background.

Here are the ten noteworthy baby names June 2016 that I’ve got my eye on.

Jack – Lin-Manuel Miranda has transformed from toiling playwright-composer-performer to household name over the last two years. Hamilton, his take on early American history dazzles audiences, reminding us that the Founding Fathers were gutsy risk-takers and idealists. And so I’m fascinated to see what he might do in the Mary Poppins sequel. Yup, that’s right. In June, Disney announced that the sequel would star Emily Blunt as the carpet-bag carrying nanny and Lin-Manuel Miranda as a lamplighter named Jack. They’re not making it up from nothing, either – apparently PL Travers penned a whole series of stories, just waiting to be brought to life. Jack has been a #1 name in the UK – it’s still tops in Ireland – but has been overshadowed by Jackson in the US. Could that change? The movie’s release date is set for Christmas 2018.

Hermione – Did you follow all the drama about the casting of Noma Dumezweni as Hermione in the London production of Harry Potter and the Cursed Child? I was intrigued the first time I heard the theory that Hermione could easily have been black, and it makes perfect sense. JK Rowling agrees. This piece is the best discussion of the decision that I’ve read. It makes me want to hop on an airplane and fly to London, just for the play.

Simone – Because Simone Biles! Olympic fever was already setting in this month, even though the US women’s gymnastics team wasn’t officially named until early July. All you lovers of Alice and Genevieve, Vivienne and Charlotte, hear this: Simone ranked just #821 last year. Seriously. It’s the perfect stands-out/fits-in name for a daughter.

Rio – Speaking of the Olympics, will Rio get a boost as a baby name? Duran Duran sang “her name is Rio, and she dances on the sand” back in 1982, which made Rio a girl’s name. But then came River Phoenix, and River became more of a boy’s name. Since Rio is simply the Spanish and Portuguese for river, that checks the boy column. Except River is rising for girls, too … The numbers are split, but lean Team Blue: 103 boys and 38 girls in 2015. Will we see a boost next year?

Dory – Names we love for girls include Nora and Cora. Names we avoid for girls? Dora. Is the animated character just too much of a presence for us to consider using her name for an actual child? New Disney-Pixar flick Finding Dory broke all sorts of box office records following the movie’s June 17th release. But will the adorable blue regal tang convince parents to name their daughters Dory? Or Dorothy, nickname Dory? It’s worth noting that Nemo never did catch on …

Hank – If any name from Finding Dory makes a likely breakout pick, it must be Hank. Spoiler alert: Heroic, shape-shifting octopus Hank aids in Dory’s rescue, and she eventually persuades him to return to the ocean, too. Originally a diminutive for Henry, Hank feels more like an independent name in 2016, with so many short names for boys in vogue.

Speaking of Finding Dory, have you read the list of Production Babies? Find it here.

Anton – Here’s another name that I’ve been curious about for ages: Anton. The accidental death of rising Star Trek star Anton Yelchin put the name in the headlines. Two-syllables, ends-in-n, and an update to long favorite Anthony, Anton has always felt like a name that should be more popular. But it’s barely hugged the edges of the US Top 1000 in the last few years. Could this be the name’s moment?

Jon – I’m not following Game of Thrones – though lately I’m tempted to overcome my dislike of on-screen gore and go for it. But you’d have to be under a rock to miss the impact of Kit Harrington’s character, Jon Snow. While John hasn’t been the #1 name for ages, the name’s influence remains considerable. Could Jon fit right in with mini-names like Max and Kai?

Dragan – I watch sports just for the names. Okay, that’s only particularly true. I actually really enjoyed watching the NBA Draft. Most of the top picks had predictable names for 20-ish men – Ben, Brandon, Jaylen. But then there was Dragan Bender, the #4 overall draft pick, who went to the Phoenix Suns. He’s Croatian, and his unusual given name comes from a Slavic word meaning precious … but sounds an awful lot like Dragan. Except the emphasis is on the second syllable: drah GAHN.

Arlo – Arlo continues to rank in the top five most viewed name posts for boys here at Appellation Mountain. Is it the lingering Good Dinosaur impact? (Since I mentioned production babies earlier, you can find the list from The Good Dinosaur here.) Is Arlo’s tenuous connection to Charles? (I’ve included it on my list of unexpected nicknames for Charles.) Or is just the newest, stands-out/fits-in name for a boy?

These are my picks for Noteworthy Baby Names June 2016. Anything else in the headlines last month that caught your eye?