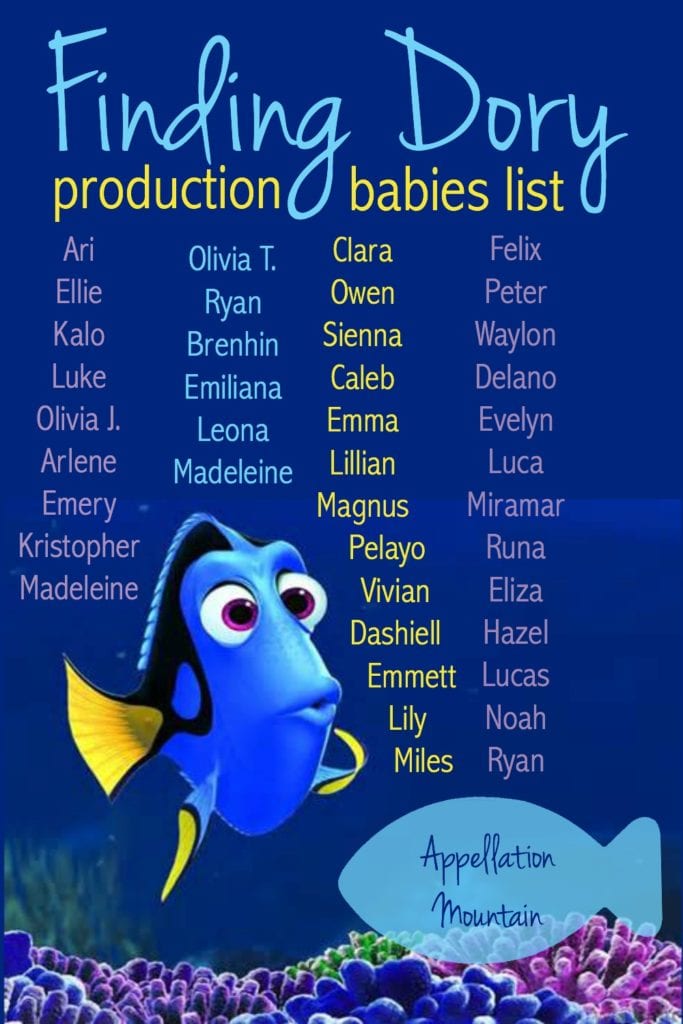 The Finding Dory production babies list is here! While I’ve yet to see the movie, the wonderful Angel forwarded me a snapshot of the most important part of the credits.

41 babies total make the list, including two sets of twins.

The stand-outs this time were Miramar and Delano – true rarities! Not one, but two, girls named Madeleine also appear. That’s always been my favorite spelling. I’m always excited to see Dashiell. And Peter …

While production babies tend towards the creative, the most popular names are always well-represented, too. The Finding Dory production babies are no exception. The list includes two girls named Olivia, plus fellow Top 100 picks Luke, Lucas, Owen, Caleb, Ellie, Clara, Lillian, Lily, Evelyn, and Vivian. The current #1 names in the US were represented, too, with a Noah and an Emma.

On-trend names make up another well-represented group of names for any Pixar production babies list.

Ari climbed for boys in 2015, following other mini names like Eli into wider use. Emery is the new Avery, and fellow Em- name Emmett hovers just outside of the Top 100. Sienna and Eliza rose for girls. Twins Miles and Felix both bear trending names, too.

Two girls were named Madeleine, one of the less popular spellings. And yet, it fits well with the French names for girls we’ve embraced, like Genevieve.

Cowboy cool Waylon makes the list, along with literary Dashiell – which is also a Disney-inspired baby name, thanks to The Incredibles.

Finding Dory Production Babies: The Most Disney of Them All

Traditional Peter appears frequently in children’s stories. J.M. Barrie’s Peter Pan, or The Boy Who Wouldn’t Grow Up was published in 1904. Prokofiev’s Peter and the Wolf dates to 1936, and Pete’s Dragon was 1977. Disney created the last one; it’s adapted both of the other two – most famously Peter Pan. It feels like a fitting choice for a Pixar production baby, don’t you think?

It’s possible that the name I’m reading as Kalo is actually Kato – but after squinting at the picture for ages, I think it’s Kalo. Since we don’t know the gender of the Finding Dory production babies, that makes it even tougher to guess. Kalo could be a spin on artist surname Kahlo, or maybe it’s inspired by something else. Ten children were named Kalo in 2015, so it’s not completely unique.

Retro Arlene surprises, too – is it the next Mabel?

While Kristopher has been in the US Top 1000 since the 1950s, when traditional Christopher started to climb, I’m not sure what to make of it here. Maybe he has brothers named Kaden and Kruz and sisters called Kiara and Kendall? Or maybe it’s a nod to the family’s heritage, since a K spelling is traditional in many European languages.

Brenhin strikes me as a creative respelling of Brennan. Though Brenin is the Welsh word for king, and Brenhin was an older spelling of the title.

Until now, Delano has only been the D in Franklin Delano Roosevelt. The Delanos were a prominent American family, tracing their roots to the Mayflower. It’s originally a French surname that means, roughly, “from the swamp.” It has a long history of sparing use as a given name.

Miramar comes from a Spanish phrase meaning “look to the sea.” It was a place name in Cuba, Florida, and throughout the Spanish-speaking world. It’s just flat-out gorgeous, and completely unexpected, too.

Pelayo fits in the imports section, but I’ve never heard it before, so it goes with the rarities. Two popes and a few saints, plus a medieval king, all answered to Pelagius. It ultimately comes from a Greek word meaning “the sea.”

Two names with subtle references to the sea! Coincidence, or proof that Finding Dory production babies’ names were influenced by their parents’ projects?

International Runa comes from Scandinavia, but there’s a magna character named Fairy Navigator Runa, too. A second possible Scandi import is Magnus, though it also fits with the on-trend name category.

Emiliana strikes me as Spanish or Italian, but it might just be an elaboration in the key of Liliana and company. Luca might be inspired by his parents’ roots – or maybe really belongs with the on-trend names.

Which of the Finding Dory production babies names is your favorite?