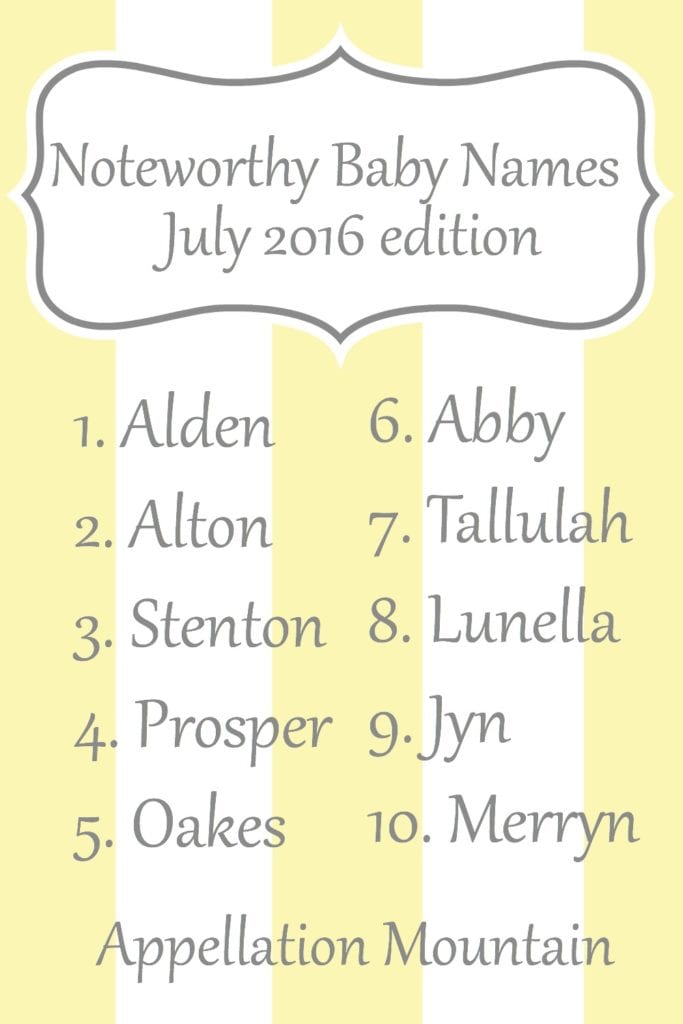 Noteworthy baby names July 2016 draws inspiration from pop culture and current events. Why? Because those are the exact same sources new parents turn to – often without being fully aware! – when naming children.

It’s never completely clear why some headline-making names catch parents’ attention, while others just fade away. And I’m not betting that any of these are the next Emma and Noah. But here are ten noteworthy baby names July 2016 that deserve a closer look.

Alden – Actor Alden Ehrenrich has been cast as the new Han Solo. The prequel debuts in May 2018. Alden has ranked in the US Top 1000 more years than not, but seldom crossed into the Top 500. And yet, the surname name feels like a promising choice in 2016. Or perhaps 2018, assuming the young Han is a hit.

Alton – The tragic death of Alton Sterling in Baton Rouge earlier this month has been part of a summer of violence so disheartening that I hesitate to mention it here. And yet, we know that painful headlines are just as likely to impact name choices as joyful ones. And with Alden on my list, well … isn’t Alton just as likely to catch parents’ attention? The English surname was used sparingly in the early twentieth century. In recent years, celebrity foodie Alton Brown has owned the name. Now it might feel very different, a name given in commemoration.

Stenton – Just one more two-syllable, ends-in-n surname name, I promise! David Bowie was born David Robert Jones, son of Haywood Stenton Jones and Margaret Mary Burns Jones. Dad was known as John; mom as Peggy. Stenton was Haywood’s grandmother’s maiden name. Why does any of that matter now? Because Duncan Jones, the firstborn child of David Bowie, has welcomed his first child, son Stenton David Jones. He’s kept the names all in the family. I’ve written about how I expect Bowie to trend in 2016 and beyond. But Stenton? It’s worth watching.

Prosper – Speaking of trends worth watching, I continue to find modern virtue names intriguing. Many of them aren’t really new – they’ve just never been common. I had a conversation about names with a 60-something family friend the other dad. He shared that while his dad always went by plain ol’ Bob, his name was really Prosper. Many years later, they discovered that his legal name was actually Prosperus. Which is all kinds of amazing, right? I’ve always found this name intriguing, so the conversation was especially meaningful.

Abby – While we’re at the movies, can we talk about Ghostbusters? Melissa McCarthy played Dr. Abby Yates. And I discovered the exhilarating thrill of sharing my name with a hero.

Tallulah – Tallulah never seems to take off, does it? Despite the revival of Hollywood icon names, our growing affection for Lucy, Lucille, and Louisa, the high profile birth announcement of a celebribaby, and several other uses, Tallulah remains off-the-grid. Still, 157 girls were given the name in 2015, and July brought a Netflix original movie, Tallulah, starring Ellen Page. Netflix did wonders for Orange is the New Black’s Piper, after all.

Lunella – Another name to file under names-that-should-succeed-but-might-not. Take Luna, smoosh it with a Bella name, and bestow it on Marvel’s wicked smart, nine-year-old superhero, Lunella Lafayette. What’s not to love? Moon Girl debuts this Fall. As of 2015, Lunella was nearly unused as a girl’s name in the US.

Jyn and Felicity – July brought lots of chatter about Rogue One, the first film in the Star Wars universe that isn’t ultimately about the Skywalker legacy. The star of the movie is rebel fighter Jyn Erso, played by Felicity Jones. It’s set for release in December of this year, so we’ll have yet another chance to see if Star Wars baby names are a thing.

Merryn – Merryn probably caught my eye because I’m such a big fan of underused Maren. It comes from a new video game called Song of the Deep, and it’s just perfect for a story built around the sea, isn’t it? Naming a mermaid anytime soon? Merryn makes sense.

Have you spotted any interesting names lately? Do you think any of the noteworthy baby names July 2016 will catch on?