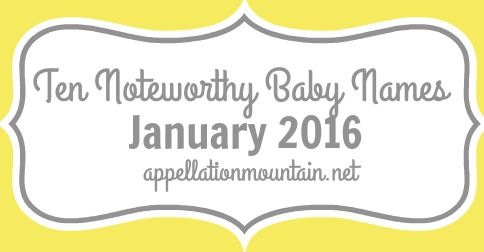 One of my plans for 2016 was to share the most popular baby names for every month at Appellation Mountain.

Appellation Mountain isn’t a database. New names appear as blog posts. So a wildly popular post from the 27th of the month will almost never appear in the Top Ten.

Plus my brain? Is not super orderly. I already stick to a strict list for March Madness, and it turns out that once a year is about where I max out.

So instead of a reliable, steady data-driven list, welcome to the Ten Noteworthy Baby Names series. A little bit of data, plus a whole lot of my judgement of what’s attracting extra attention and why. 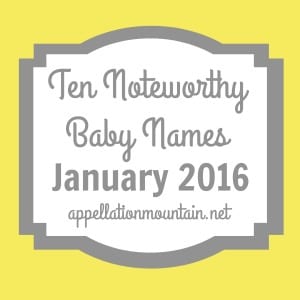 I’ve been watching Frederick for ages. How can it be that such a venerable classic still feels fusty? Frederic is on my personal shortlist, so maybe I’m biased. But I think it absolutely should be right up there with Alexander and Theodore.

So I’m truly excited that we ended January with a double dose of Freddie.

First came Louis Tomlinson’s baby boy. He and Briana Jungwirth announced the birth of their son, but took a few days to pin down the name. Rumors flew! First it was Sydney Rain. Then Conchobhar. And finally, Freddie Reign – a bold, braggadocio middle coupled with an accessible first name. It’s also big in Britain, where nickname-names like Alfie have been Top Ten favorites in recent years.

Just a few days later, Christina Ricci shared the name of her son at the Screen Actors Guild Awards. Ricci and husband James Heerdegen welcomed Freddie back in August 2014, but she hadn’t shared his name.

Just 80 boys were named Freddie in 2014 in the US, along with around 600 boys called Frederick/Frederic.

Could it be that this name is finally ready for revival in the US?

In January, I finally updated the Baby Name of the Day post for Amelia, and it was very well read, indeed.

Emily was big in the 1990s. The 2000s belonged to Emma. Now kinda-sorta-related name Amelia seems to be the unstoppable member of the extended family.

Amelia is currently ranked #15 in the US, just two places up from 2013. But if you look at the fastest rising names for girls in 2014, Amelia makes it into the Top 25.

Could this traditional name follow Charlotte into the US Top Ten? Definitely something to think about. 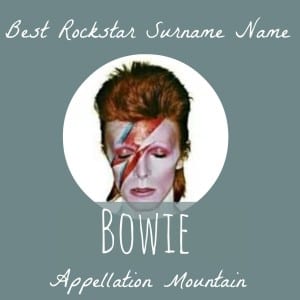 David Bowie kept his battle with cancer quiet, making news of his death even more shocking.

As rockstar surname names go, Bowie had been quietly catching on. Gwen Stefani is mom to Apollo Bowie Flynn, and one of Zoe Saldana’s twin sons is Bowie Ezio.

As of 2014, Bowie is still pretty far down on the popularity list, behind more established rock star surname names like Lennon and Hendrix.

Perhaps we’re more likely to name our children after rock stars when they’ve gone to their reward. Scandals might be less likely posthumously. Or maybe the names feel more substantial, more like a legacy.

The Baby Name of the Day post for Bowie was much viewed in January, but we may have to wait a while to see if this name really catches on. After all, 2016 baby name data won’t be available until May 2017.

Here’s a Baby Name of the Day that was among the most popular reads for January 2016 – and I haven’t a clue why! Am I missing a new television character or sports star?

I do think Grady is a fabulous, under-the-radar surname name for a boy. And it shares sounds with Brady and Grayson.

Sylvie is another Baby Name of the Day that was well-read in January 2016. Part-Sophie, part-Ava, I think that Sylvie, like Grady, succeeds on sound.

But like Grady, I’m not quite certain if something specific boosted the name this month – or if it’s just a great name that’s finally catching on!

Am I the last person to discover E! original series The Royals, with Liz Hurley as the queen of England?

Possibly. It turns out that it’s two parts indulgent soap opera and one part fascinating study for those who love stories inspired by Shakespeare. The Royals is loosely based on a Michelle Ray novel, Falling for Hamlet. In both cases, Ophelia is at the center of the story, as is a very handsome, very troubled prince.

It’s the kind of thing that could help rehabilitate Ophelia, a name that has cried mad scene for far too long. It’s also worth noting that Ophelia regularly appeared in the US Top 1000 through the 1950s.

Could Ophelia shed all of her tragic baggage? It’s every bit as literary as Emma or Harper, shares the lovely -lia ending of Amelia, and might make a great substitute for the unstoppable Olivia.

Earlier this month, I wrote about the rarity Deckard. That post prompted me to look at Decker, a surname name with a modern sound.

Decker also fits in with Preppy Hellraiser names like Hayes and Wilder. 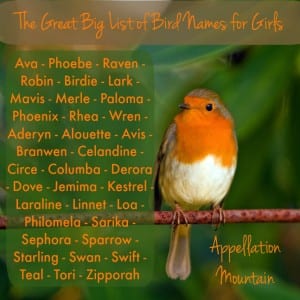 I may be biased when it comes to Wren. It’s my daughter’s bonus middle name, honoring her aunt, who has been nicknamed Bird since childhood. (One of my top name loves is an unconventional honor name.)

This makes Wren leader of the pack, but bird names in general are attracting an awful lot of attention lately. This list of avian-inspired names for girls is one of the most read on Appellation Mountain in recent months.

Alessia sounds like the kind of liquid baby name that could catch on in 2016, an alternative to Aria and Alyssa. It’s actually Italian, a cousin to Alessandra and Alexis – though unlike those two names, Alessia has yet to crack the US Top 1000.

Alessia makes the list this week thanks to Canada’s Alessia Cara. The singer’s hit song “Here” is everywhere right now.

At four syllables, Alessia feels like a replacement for the equally elaborate, classic-meets-romanza Isabella.

I happened to walk through a big shopping mall in the ‘burbs last Saturday, and ohmygoodness, was Deadpool everywhere! And then I spotted a kid on the playground wearing a hat with the logo, and realized that the buzz for the new Ryan Reynolds super hero flick is BIG.

When the Marvel Comics character was introduced, he was a bad guy. Now he’s more of an anti-hero. Reynolds played Deadpool in a previous X-Men movie, but it looks like this version of the character is a little darker.

What does any of this have to do with Wade? The character we call Deadpool was born Wade Wilson. Wade had a good run in the 1960s and 70s, making it a logical choice for the character.

I’ve often thought that Wade could be huge today, if only it hadn’t been popular in an earlier generation. Could Deadpool be just the boost that Wade needs? After all, Wolverine has done wonders for Logan.

Did any baby names catch your eye in January?