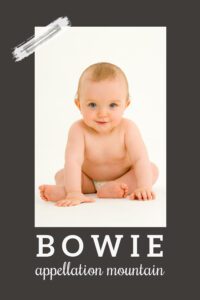 The baby name Bowie combines an on-trend surname sound with the enduring cool of a rock icon.

Thanks to GC for suggesting our Baby Name of the Day.

In the beginning, the baby name Bowie is a Scottish and Irish surname meaning fair-haired.

Plenty of notables have worn it – artists, athletes, politicians.

It’s a popular place name, too, thanks to so many acclaimed Bowies.

Most pronounce it like Bo and Beau, with a long O sound to rhyme with row and mow.

But there’s at least one that rhymes Bowie with Louie and Dewey. (That would be Bowie, Maryland, named after the state’s former governor, Oden Bowie.)

Back to famous Bowies.

James Bowie was born around the turn of the nineteenth century. He rose to notoriety in a duel. Jim was shot and stabbed, but still managed to kill his opponent with a knife.

It’s said that Bowie and his brothers all made various design improvements to a large knife used by hunters to butcher their game – hence, the term Bowie knife.

Jim moved to Texas in 1830 – back when it was part of Mexico. He married the vice governor’s daughter and joined the militia. By 1836, he was fighting for Texas’s independence, and was co-commander when General Santa Anna and his troops overtook the Alamo.

Jim, along with the rest of the Texans, died at the Alamo.

That said, for all the cries of “Remember the Alamo!” it’s not the kind of Americana that’s front and center in our imaginations. Gone are the days when every kid wanted a Davy Crockett coonskin cap. So while we still recognize the phrase “Bowie knife,” relatively few people seem to know just how it got its name.

Whether you’re a fan or not, it’s hard to associate the baby name Bowie with anyone other than the late, great David.

Born in London in 1947, David Jones was forced to change his surname early in his career.

That’s because Davy Jones of The Monkees was well-established at the time.

The other David Jones borrowed his stage name from the knife.

His first UK hit came with Space Oddity in 1969, and he struck it big in the US with Fame in 1975. His sound evolved over the years, and he added acting to his repertoire – while still producing hit after hit, and being inducted into the Rock and Roll Hall of Fame.

As an actor, he’s played a goblin king in Labyrinth and Nikola Tesla in The Prestige. He’s also made cameos as himself in flicks like Zoolander.

In baby name circles, the singer was also known for calling his firstborn Zowie, though Zowie later re-named himself Duncan.

Among the most influential musicians of his generation, Bowie died in 2016.

Nearly every English surname appears in the US popularity data or census records occasionally.

Lawyer Bowie Kuhn represented Major League Baseball during most of his career, serving as a commissioner beginning in 1968.

The first time the baby name Bowie appeared in the US Social Security Administration was 1920, with five boys. It surfaced again, in 1975, with eight boys receiving the name.

The name slowly rose in use over the following years, picking up in the twenty-first century. After all, parents embraced Hendrix, Marley, and Lennon during the same era.

Celebrities like actor Zoe Saldaña have used it for their children.

The question now is whether the baby name Bowie will continue to gain in use. With the stylish Bo sound and our love of all things surname, it’s quite possible that we’ll hear more in the coming years.

What do you think of baby name Bowie? 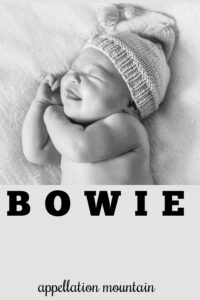