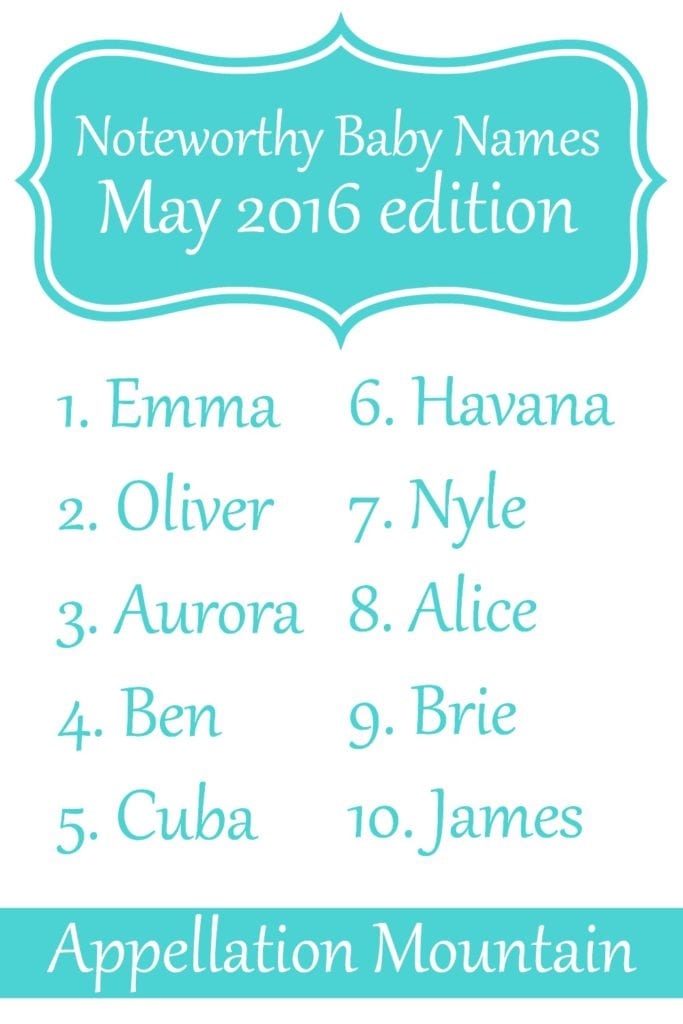 Noteworthy baby names May 2016 is coming out much later than I’d planned. I’m already working on June’s list!

But I didn’t want to scrap this list, so let’s talk about the noteworthy baby names May 2016 … because there are a few here that are just too good to overlook!

Emma – May was all about the release of the new US popularity data. By now you almost certainly know that Emma held on to the #1 spot in the US for another year. But maybe you missed this story: the oldest living woman in the world? Emma Morano of Verbania, Italy. It’s an interesting reflection of how names cycle in and out of popularity. While the idea that a name rises and falls and rises again over the course of a century is way oversimplified, Emma is one name makes you think it’s true.

Oliver – Speaking of popularity, I’m continuing to watch Oliver. The name rose dramatically in the rankings in 2014, and again in 2015 – but I’m not hearing a slow down in the number of parents considering the name. It’s another Alexander – traditional enough, but with a modern sound. Also like Alexander, it’s currently more popular than ever before. I mention it in noteworthy baby names May 2016 because last month we learned that it ranks in the Top 5 of seventeen of the 50 states. Other stand-outs include Jaxon in Oklahoma, Lincoln in Utah, Ezekiel in Hawaii, and Wyatt, which makes the Top Five in five states. I wonder if any of these are likely to rise nationwide?

Aurora – Here’s another quirky find from the state lists: Aurora makes the Top Five in Alaska and Montana! It’s only #79 for the US as a whole, so I find the ranking surprising. Alaska and Montana are relatively small states in terms of population, so it’s not enough to drive the name up the charts. I really like the name Aurora, so I’m pleased to have a reason to mention it!

Ben – I’m listing this one with noteworthy baby names May 2016, though perhaps June is really the month. Benji reminds me of the loyal and lovable dog, Benjamin is straight-up traditional, but Ben? Ben is the bell in London. Not the clock tower, though we tend to call the whole thing Big Ben. The bell may have been nicknamed in honor of a politician responsible for rebuilding the Houses of Parliament and adding the tower. Or maybe it was nicknamed for a boxer from the era. But right now, Ben makes me think of England in general – and the Brexit controversy has images of England on the news nonstop lately, especially the iconic clock tower.

Cuba – While we’re globetrotting, do you think this could be the moment that Cuba really takes off as a baby name? Cuba ranked briefly in the girls’ Top 1000 way back in the nineteenth century. More recently, Cuba Gooding, Jr. inspired a handful of parents to use the name for sons. Gooding is a junior – the name reflects their family’s history. The numbers don’t show an increase in use, but with increasing interaction between the US and Cuba … maybe?

Havana – If Cuba has potential, how ’bout Havana? Parents love place names, but more than that, Havana is so very close to the stylish Savannah. While there’s been a tiny increase in use in the last few years, Havana remains rare. Still, if I had to pick Cuba or Havana, I’d bet on this name. Why?  Could it be that the city’s name feels less politicized than the country’s name? Or is it just because Havana sounds like a Harper/Haven/Savannah mash-up?

Nyle – We know that reality television can shape the names that we choose for our children. (Hello, Teen Mom’s Bentley!) But Nyle DiMarco was a rising celebrity even before he won the most recent season of Dancing With the Stars in May. That’s one year after he won America’s Next Top Model. But DiMarco is far more than a pretty face. He’s also the first Deaf winner of both shows, and an inspiring advocate for the Deaf community. The name has a long, sparing history of use, but could be especially appealing right now, a mix of faded Kyle and stylish Miles.

Alice – From the small screen to the big, have you see the new Alice movie yet? I wrote about Alice – and eight other girl names borrowed from summer movies – at the end of May. I’ve yet to see the second installment in the series, and Alice Through the Looking Glass isn’t nearly the monster hit that 2010’s Alice in Wonderland was. Still, Alice remains in bright lights, reinforcing the name’s classic, storybook qualities while making it feel current and cool, too. Alice was a Top Ten name in the late nineteenth century. I doubt the name will climb that high again, but it still has room to climb from #87.

Brie – Rumor has it that Oscar-winning actress Brie Larson is in talks to play Captain Marvel in the first Marvel flick to feature a female superhero. While the original Captain Marvel was male, at least two of the Captains Marvel have been women. The movie is slated for a 2019 release. I’m fascinated by Brie – it’s a slim, trim name for girls, but it’s also breezy, modern, and unexpected. 63 girls were named Brie in 2015, along with 220 girls named Bree. After Ms. Larson’s Oscar win and talk that she’ll join the mega-popular Avengers universe, could Brie follow names like Brianna and Brielle into wider use?

James – One more from the movies. While it’s not official yet, Daniel Craig has repeatedly said that he’s starred as James Bond for the last time, and that’s been more than enough to start the speculation over a new Bond. Will they cast a younger Bond? A black Bond? Or … a female Bond? While that last one strikes me as unlikely, it’s fun to imagine how it would change things. Unlike many a superhero role, there’s no precedent for another character assuming the identity.

And yet, when Indian actress Priyanka Chopra was asked about playing a Bond girl, she replied, “I get that all the time. But I wanna be Bond.” Which makes me think … if they dared to tried, would they change the name? Bond. Jane Bond. Or would it be more fuel for James as a girl’s name? It’s definitely not putting parents off James as a boys’ name. It rose for boys last year, and we know another brand new baby boy James.

The broad and outside-the-box search for a new James Bond reinforces a key strength of classic names. They’re impossible to pigeon-hole, so your Katherine or Michael could be anybody, at any age. Some dismiss them as stuffy, but I think classic baby names can be astonishingly versatile.

Have any names in the news caught your eye recently? What would you add to noteworthy baby names May 2016?