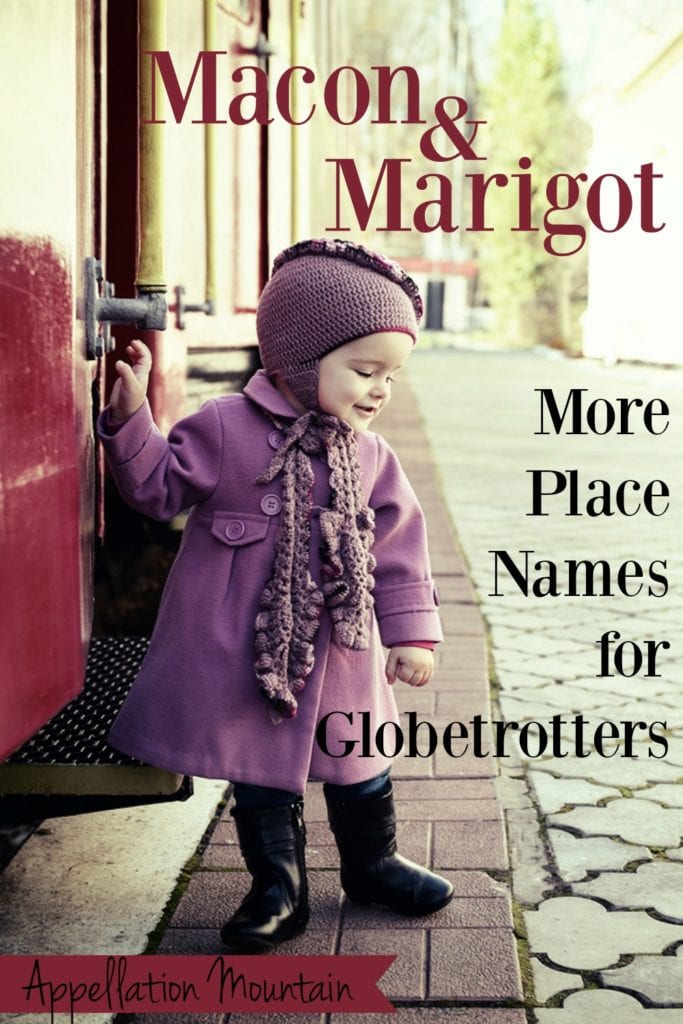 I’ve only just scratched the surface of possible place names.  In order to limit my list, I ignored historic names no longer in use, poetic references, small villages, regions, rivers, mountains, forests, and lots of other sources of inspiration.

Slicing up the names into continents wasn’t easy, either.  There are a few North American locales that almost certainly originate in Europe, and the same is true for the South, too.

I also feel like I’m missing tons of great possibilities, so I’m hoping you’ll add to this collection.

With all of those caveats, I’m delighted by how many truly wearable names can be borrowed from the map.  I’m in love with the idea of Macon and Marigot at the moment, but Santander and Serra have captured my imagination, too.

Read on for more baby names borrowed from the map!

Abilene – I love the cowgirl vibe of this Texas town, plus the easy nickname Abby.

Albany – This could work for a son or daughter, though I’ll admit that I’ve never been there.  Is it picturesque?

Atlanta – I love the sound of Atlanta, so close to the mythological Atalanta.  It was rumored to be a favorite of the Beckhams, too.

Auburn – Worn by a color, a university, and many a town, that Au is popular for boys and girls – think of Autumn and …

Austin – Wildly popular, both as a destination and a child’s name.

Boston – Recent tragedy aside, Boston is a great town that wears well on a boy.  Though it is a reminder of the pitfalls of place naming: any city can make headlines in a negative fashion.

Calgary – I’m not sure about this one.  I’ve omitted Toronto and Montreal from this list, but Calgary’s Cal makes me think he might be an out-there choice for a boy that still works.

Dayton – It makes me think of Ohio, but others will hear him as a brother to Trayton, Jayden, and company.

Decatur – Another Georgia place name.  And Illinois.  And Nebraska, Michigan, Iowa, Alabama, Texas … Most – if not all – of them were named in honor of late eighteenth and early nineteenth century American naval hero Stephen Decatur, Jr.

Denver – A musical name thanks to John Denver, the mile-high city is also capital of Colorado.

Hamilton – A preppy, unexpected surname worn by a city in Ontario.

Havana – Why is Savannah so stylish and Havana so neglected?  Search me.  With so much history, Havana feels like an appealing possibility.

Houston – Another storied Texas city, though the associations with NASA’s mission control are so close that Houston might feel like a problem.

Hudson – My first thought is always Hudson Bay and the Hudson River, but this is a popular place name, too, thanks in large part to explorer Henry Hudson, even though his last voyage resulted in mutiny.  Another intriguing thing about Hudson: Hud was a short form of names like Hugh and Richard once, making it a possible way to honor a loved one while using an on-trend name.

Jackson – Another choice found all over the map and in a nursery school near you.

Joliette – I found this one in Quebec, a mix of Juliet and the pretty Jolie.

Macon – Rhymes with bacon, and reminds me of the mega-popular Mason.

Marigot – It’s the capital of St. Martin in the Caribbean, named for a swamp.  I think it means tiny, but I can’t be too sure … it feels like a pretty mash-up of Marie and Margot.

Memphis – It was an ancient place name long before Tennessee existed.

Miami – Other great American cities, like Chicago, don’t quite fit as given name.  But Miami could be just right for a daughter.

Phoenix – Popular for many reasons, including its status as a place name.

Providence – A New England name with a heavy virtue vibe.

Raleigh – As in Sir Walter, and the capital of North Carolina.

Salem – The witchcraft trials make this lean a little bit goth, but on sound alone Salem is winning.

Tulsa – If names like Lorna and Gilda were stylish, Tulsa would almost certainly be wearable.  But maybe she reads a little too clunky right now.

Salvador – A common place name and given name with a heavy meaning – savior.  Though must of us will probably think of the painter Salvador Dali first.

Santander – It’s another saintly name, this time after either Andrew, or the more obscure Emeterius.  Either way, I really should have added Santander to the European list – the Colombian location is clearly named after the original.

Serra – A common place name, could Serra be an update for Sarah, or would it be too confusing?

Quito – I don’t like the way “quit” looks in this Ecuadorian place name, but the sound key TOE is appealing.

Which place names have I missed?  Would you consider any of these as names for a child?  Met any kids with great place names?