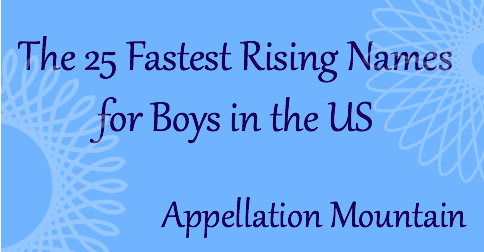 What are the fastest rising names for boys in the US?

I tend to look at rank when I’m asked this question. Which name leapt from #344 to #221? But last week, we looked at the girls’ names from a different perspective: the actual increase in newborns given the name from one year to the next.

In case you missed it, here are the reasons I took this approach:

I could crunch years’ worth of data, but I’m mostly curious to see what’s happening in the last few years. So I’ll start with this post today, and make sure to revisit it when the 2015 data is released in May 2016.

And now, on to the fastest rising names for boys! 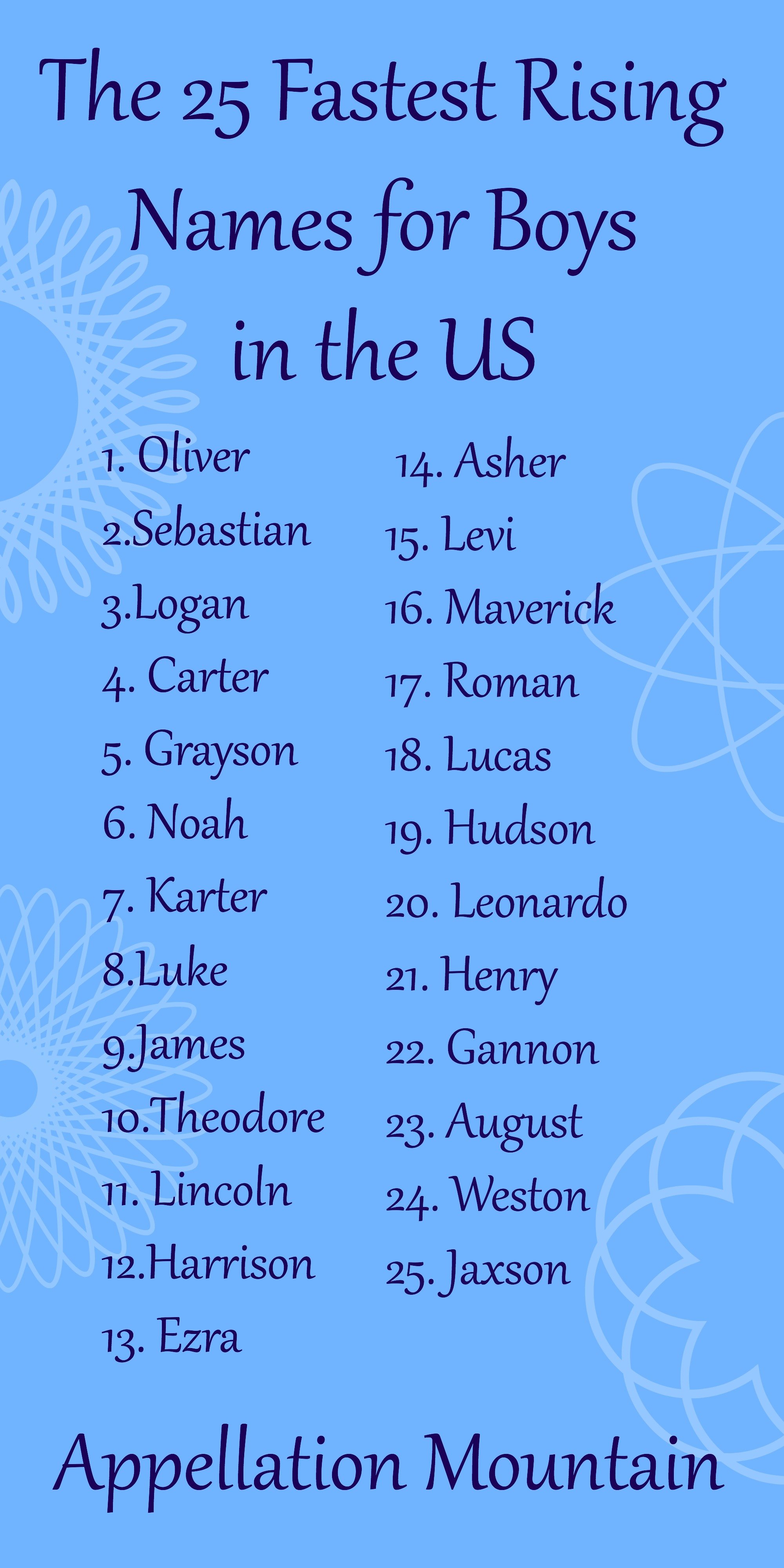 The Fastest Rising Names for Boys: More than 2000

Oliver was given to more than 2,000 more boys in 2014 than 2013. On the girls’ side, Olivia was the fastest gainer, with more than 1,300 additional newborns. Oliv- names are clearly the current darlings of the baby naming world. But this is a massive leap, and it’s the second year in a row that Oliver has soared. In 2012, the name ranked #73. It’s up to #32 now. Another jump of similar proportions would land Oliver smack in the US Top Twenty or even – possibly – the Top Ten!

The Fastest Rising Names for Boys: More than 1,000

Sebastian has been around for a while. In fact, this name has been in the US Top 100 since the year 2000. But it’s really heating up lately. In 2014, there were more than 1,700 additional boys given the name. Credit to Cassandra Clare’s Mortal Instruments novels? The CW’s Reign? Or is this another name boosted by parents after an English-Spanish crossover possibility? Whatever the case, Sebastian is one to watch.

Logan – On the girls’ list, Skylar surprised me. It’s still gaining, and how! The same is true for Logan on the boys’ side. More than 1,200 additional boys were given the name in 2014 than 2013. This puts the name just outside of the US Top Ten. Could Logan break in next year? It looks very likely.

Carter – Just a smidge over 1,000 more boys were named Carter in 2014 than 2013. The name still feels slightly preppy and buttoned-down, but it’s also mainstream. It’s the kind of name that seems different because parents didn’t know any boys called Carter growing up.

The Fastest Rising Names for Boys: More than 900

Grayson was the fictional surname of the oh-so-privileged family in ABC’s Revenge, and it has a sort of preppy vibe. It fits in perfectly with boys’ names in favor today, a cousin to the Aiden, as well as surnames like Jackson and Carter. With almost 1,000 more boys given the name in 2014 than 2013, this name seems to be headed straight up.

Noah surprised me when it slipped into the #1 spot in 2013, and I doubted the name would hold for a second year. I was so wrong. Noah was given to more than 950 additional boys in 2014, a respectable gain well ahead of #2 name Liam’s additional 250-some births. It proves that -a ending names for boys are here to stay.

Karter – It’s almost a universal rule that any name popular with a C will eventually be spelled with a K. Not only were over 1,000 more boys named Carter in 2014, but nearly 1,000 more were named Karter-with-a-K. That’s a gain that nearly rivals Oliver, and could make Carter/Karter the next Jackson/Jaxon/Jaxson.

The Fastest Rising Names for Boys: More than 800 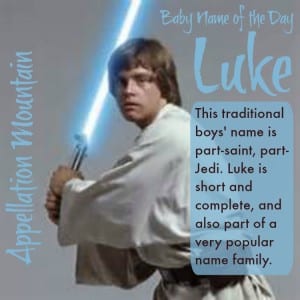 Luke was a traditional choice for boys before Star Wars made it a hero’s name. In 2014, well over 800 more boys were named Luke than in 2013. And that’s before the legendary Luke Skywalker returned to the big screen at the end of 2015. It’s among the most popular choices in an entire family of Luc- and Luk- names.

The Fastest Rising Names for Boys: More than 700

James has made headlines in recent years, but mostly as a name for girls. All that chatter obscured the fact that James really has been catching on lately – as a name for boys. James is one of the most popular names for boys ever – a true classic. But 2014 was the first year James was back in the US Top Ten, thanks to a gain of nearly 800 more births. That’s a big leap – ten places since 2010! – but it’s easy to overlook, since James has been in the Top Ten, and even the Top Five, often in recent decades. But make no mistake, James is a name to watch.

Theodore – More proof that traditional names come in and out of fashion? Theodore was once reserved for an animated chipmunk and a former president. Now Theodore is a fast-rising classic, given to nearly 800 additional boys in 2014.

Lincoln – Speaking of former presidents, we name our daughters Kennedy, but our sons are Lincoln. Maybe it’s because of cool, built-in nickname Link. Or maybe it’s thanks to the president’s reboot as a fictional vampire hunter. (Who would’ve thunk it?) Either way, lately Lincoln is on everyone’ list, with more than 700 additional boys given the name in 2014.

The Fastest Rising Names for Boys: More than 600

Harrison – Harrison is also presidential. It’s a rock star surname name, too, thanks to George, of The Beatles. Plus, we’re wild about Henry, the given name from which Harrison is ultimately derived. Is it any wonder that nearly 700 additional boys were given the name in 2014?

The Fastest Rising Names for Boys: More than 500

Asher has been attracting quite a bit of attention lately, an Old Testament name that sounds like stylish surname name picks. No wonder it’s rocketed into the US Top 100 this year, a gain that represents over 500 additional births in 2014.

Levi is yet another Biblical boy on the rise. Besides Levi’s Old Testament ties, it picks up a friendly, accessible Americana vibe thanks to the blue jean brand. More than 500 additional boys were named Levi in 2014 than 2013.

Maverick – I used to think Maverick was too bold a name to give a son. What if he was mild-mannered, even shy? But Maverick has gone from bold, braggadocio name to mainstream favorite in recent years. When a name becomes so popular, it sheds some of its meaning, and most of its shock value. And Maverick is popular – there were an additional 500 plus boys given the name in 2014.

Roman – In the 1980s, Roman was a rarity reserved for fictional characters. But it’s a mix of place name and two-syllable-ends-in-n names for boys that makes it feel very stylish today. And Roman is another member of the 500+ club.

Lucas – Remember how Luke was way up at #8? The Latinate form of Luke comes in at #18, meaning that the entire family of Luc- and Luk- names truly boomed in 2014. 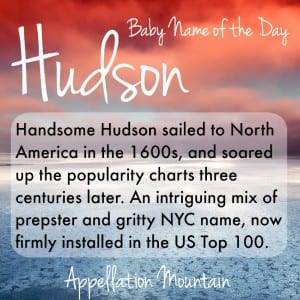 Hudson – We love Brooklyn for girls, and Hudson – as in the river that winds through New York state and New York City – might be the equivalent name for boys. Boosted by Hudson Hawk and Finn Hudson, the name still brings to mind explorer Henry Hudson, making it feel more like  modern traditional than a trendy pop culture pick.

Leonardo – Leo has roared in recent years, cracking the US Top 100 in 2014. Longer names have been popular, too, including Leonardo. It’s a little bit legendary artist, a little bit Hollywood leading man, with a dash of Ninja Turtle.

Henry – Just like James and Theodore, Henry is a traditional boys’ name that fared well in 2014. It was given to just over 500 more boys in 2014 than 2013. Many will point out that Henry has never really been out of favor – it’s a former Top Ten name that has never left the Top 150 in the US. But Henry feels fresh and stylish in recent years – and that’s different from how we talked about the name just a few decades back.

The Fastest Rising Names for Boys: More than 400

Gannon – Gannon is an Irish surname name, so it’s not surprising to see it on the list of fastest rising names for boys. After all, we’ve fallen for Riley and Mason and lots of other surname names, and Irish is a go-to for American parents at least since Brian reached the Top Ten in the 1970s. But the meteoric rise of Gannon – including an increase of nearly 500 births in 2014 – is almost certainly due to Teen Mom, and Mackenzie Douhit’s baby boy, Gannon McKee, born in 2011. In 2011, there were 114 newborn Gannons. By 2014? 747.

August – Sometimes a name succeeds because it checks all the boxes. August is a traditional choice that feels like a modern nature name. It’s nickname-resistance, but also has great built-in nicknames. There have been a handful of notables with the name, like playwright August Wilson, but it still feels new and fresh. No wonder nearly 500 more boys received the name in 2014 than 2013. 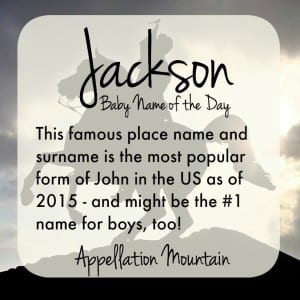 Weston – Celebrity pick North has yet to catch on as a baby name, but Easton is a Top 100 favorite. No surprise, then, that Weston is also catching on. Weston might also owe something to Wesley, Westley, and other Wes- names that parents have embraced over the years.

Jaxson – Jackson is the undisputed favorite, with alt-spelling Jaxon right behind. But the only form of the name that makes this list is Jaxson, given to over 450 more boys in 2014 than 2013. Nameberry’s Playground Analysis puts this name at #1 for boys when Jackson, Jaxon, Jaxson, and Jaxen are totaled. I’ll be watching all variations of this name closely in May, when we have the new popularity stats.

Are any of the fastest rising names for boys on your shortlist? Do any of these surprise you?