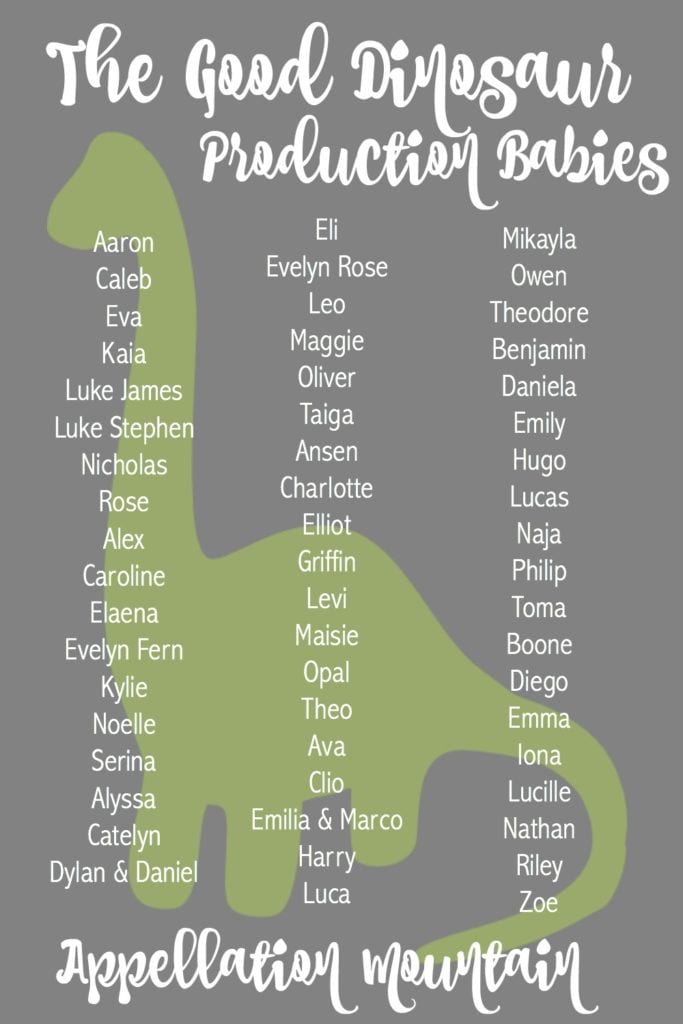 The Good Dinosaur production babies make an appealing group. They are 58 names strong, including two sets of twins.

Here’s my complete list, along with notes on the trends and styles they represent.

My favorites? Clio, of course, since that’s my daughter’s name. She was thrilled to see it go by on the screen! I thought the combination Evelyn Fern was gorgeous, too. And it was exciting to see Boone and Opal.

There’s an Opal from the Zootopia Production Babies list, too – could it be the same one?

Production babies often have creative, interesting names – see Clio and Boone! But not always. There are some rock solid, traditional choices on this list, especially for boys, like Aaron, Daniel, Luke James and Luke Stephen, Nicholas, Philip, Alex, and Lucas. Some choices, like Theodore, Elliot, Oliver, and Benjamin are traditional and stylish today.

Modern staples are well represented, too, including Caleb, Levi, Nathan, Griffin, Dylan, and Owen for the boys. On the girls’ side, there’s Noelle, Kylie, Alyssa, Mikayla, and Catelyn. There’s also a Riley, which fits in this category whether it was used for a boy or a girl.

What a difference a middle name can make! Evelyn Rose is traditional and lovely. But Evelyn Fern strikes me as far more appealing, because Fern makes the whole name seem nicely vintage and unexpected.

What makes the comparison even more stark is how similar Rose and Fern are – one syllable, both botanical names, both with a history of use. It’s a good reminder that going big with the middle name is often a winning strategy.

One of the most interesting trends in baby naming is our tendency to embrace WYSIWG naming – think mini names and nicknames-as-names. The trend was well-represented here, with boys named Eli, Theo, Leo, and Harry, plus girls named Ava, Zoe, Maisie, and Maggie.

Languages, that is! With twins named Emilia and Marco, plus Daniela, Luca and Diego, it’s easy to see the influence of Italian and Spanish.

It’s not only influence from romance languages, of course. The world grows smaller every day, and names like Toma (a Slavic form of Thomas), Taiga (Japanese), Naja (multiple origins), and Kaia (also multiple origins) reflect that change.

Opal needed a whole category of her own! It’s the perfect stands-out/fits-in name. Opal is one-part Hazel, one-part Ruby, with a dash of Olivia, too. Hard to believe it’s not in the Top 1000!

There are always some surprises in any production babies list, and this one is no exception. Is Elaena an unconventional spelling of Elena, or is it some other pronunciation? Serina seems like a respelling of Serena.

Ansen surprised me, too. Could it be a mix of young actor Ansel Elgort and the return of the name Anson to the US Top 1000?

There were some charming rarities on the lists, too. For boys, Hugo and Boone caught my eye, and for girls, Iona and Clio – though, obviously, I’m biased about that last one!

What are your favorite names from the Good Dinosaur production babies?