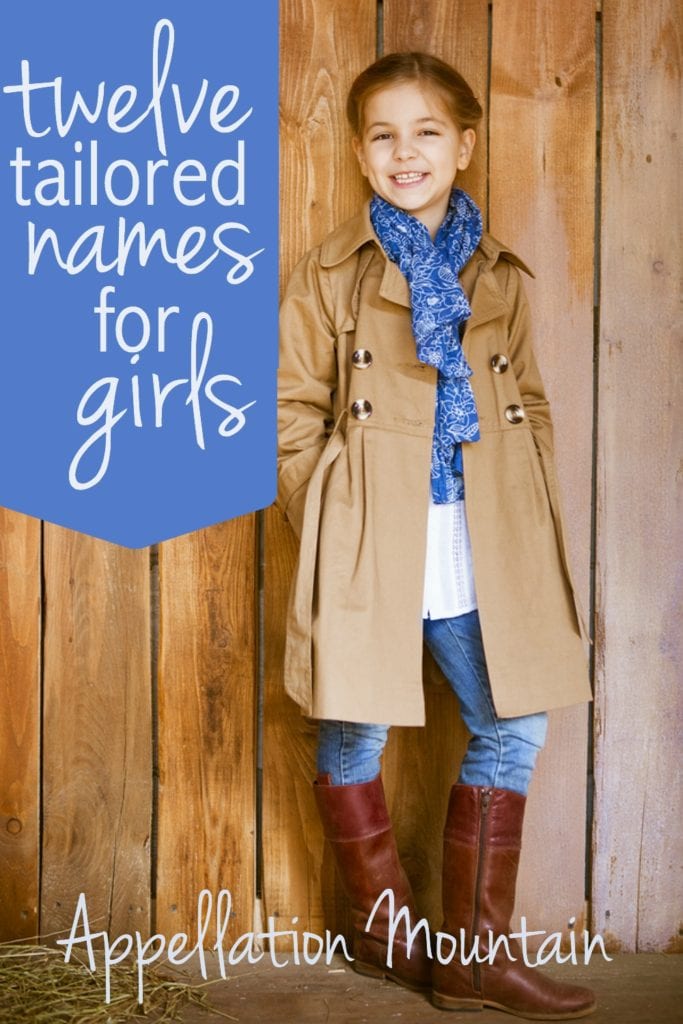 Tailored names for girls are obviously feminine, but free of frills. They’re sophisticated, but still approachable. They strike the perfect balance, the happy medium between unisex surname names like Harper and extravagant, romantic ones like Arabella.

So what are the tailored names for girls? First, let’s talk about what they’re not:

Despite that long list of nots, there’s still a wide range of tailored names for girls. There are traditional tailoreds, like Charlotte and Esther and Eleanor. But there are modern tailoreds, too, the Brookes and Paiges and maybe even Morgans.

So let’s see if we can find a dozen tailored names for girls that fit the category well, but are also nicely rare.

The following twelve – wait, make that fourteen! – names rank outside of the current US Top 500. I’ve avoided names where one spelling is more popular – so Elinor is ruled out because Eleanor is pretty common.

No wonder there are only twelve tailored names for girls on this list! Read on for my top picks.

Beatrix – Beatrix is quirky and cool. It probably started out as Viatrix – traveller – but the Latin beatus – blessed influenced the name early days. Beatrix Potter makes it literary and sweet. Uma Thurman’s character in Kill Bill makes it edgy and tough. It’s been worn by a famous saint, a long-reigning queen, and plenty of other notables. Beatrice is nearly as frills-free, but I think the x-ending version fits best with the tailored names for girls list. The -x ending spelling was given to 175 girls in 2014 – just outside of the US Top 1000 – while the -ce ending spelling was more popular, ranking #601. Colette – Colette is originally a French diminutive form of Nicole, but it feels like a stand-alone name today. It has literary ties thanks to French novelist Sidonie-Gabrielle Colette, and was also worn by a fifteenth century saint. Plenty of -et and -ette ending possibilities could make the list of tailored names for girls. Colette is rising quickly, but it still ranked #522 – outside of the Top 500!  (That’s the writer, pictured to the right.)

Constance – Constance’s meaning is clear, but it’s not quite a word name like the equally virtuous Mercy or Faith. It was big in the 1950s when most Constances were Connie. Today, it works better in full, an alternative to other classics like Charlotte or Caroline.

Edith – I was certain that Edith was in the US Top 500, but no! This is a last minute addition to the list, which turns it up to thirteen! Edith ranked #627 in 2014. Edith is an Old English name worn by royals and a tenth century saint. It feels a little heavier than many names in favor today, like the pretty Amelia and Olivia, but nickname Edie gives it a retro cool vibe, too.

Harriet – Is Harriet a little on the frilly side? Maybe. I think it appeals to parents who love names like Esther and Edith, but has a little bit of Mariel’s showier style, too. Still, I’m leaving it on the list because there’s something about Harriet that says tailored names for girls to me.

Ingrid – Another last minute addition to this list is the Scandinavian Ingrid. It’s instantly recognizable as feminine, and even a little glamorous, thanks to Golden Age Hollywood actress Ingrid Bergman. But Ingrid has a spare, no-nonsense sensibility about it. The name refers to a German god, Ing, combined with the Old Norse word meaning beautiful.

Justine – Justine is the first name on the list that is clearly a feminine form of an established masculine name. (Colette and Harriet are feminine forms of Nicole and Henry, of course, but Justine is obviously the feminine form of Justin – it’s just one letter away.) While the masculine, saintly Justin was once very popular, Justine never got quite that high. Today, it’s not even ranked in the girls’ Top 1000.

Louise – The Louis family is huge, and while it’s been popular throughout history, it’s relatively underused today. Consider this: lovely and literary Louisa stands at #973, and only recently returned to the rankings after more than four decades’ absence! While Louisa is slightly frilly, Louise makes the list of tailored names for girls. Thanks to Louise Brooks, it’s also got a certain black and white glam – after all, she’s the iconic 1920s flapper. And while Louise seems likely to follow Louisa back into the rankings, for now, it remains quite rare.

Maren – Beatrix and Louise feel like traditional names. Maren? Not so much. Maren is Scandinavian – a cousin to Karen, with deep roots in Denmark and Sweden. There’s more than one possible origin for the name, but it could be yet another spin on the evergreen Mary. I think it works beautifully for parents torn between Amelia and Sloane.

Neve – I tend to think of Neve as the Anglicization of the Irish Niamh, but there are other possible origins. (Actress Neve Campbell isn’t Irish; her unusual given name comes from her Dutch-born mother’s maiden name.) It’s a sharp name, far less common than Eve or even Maeve – both of which are just inside the current Top 500. Neve sounds like the first syllable of Nevada, and was given to around 70 girls last year. That makes it more popular than the Niamh spelling – at least in the US. Simone – Simone is the feminine form of Simon, but while Simon feels scholarly and reserved, Simone feels elegant and creative, thanks to legendary singer Nina Simone. It’s certainly among the more tailored names for girls, and it’s also rather rare. In 2014, Simone had fallen to #728. With the arrival of John Legend and Chrissy Teigen’s Luna Simone, and the debut of the new biopic about the singer’s life, it’s possible that will change.

Sybil – Downton Abbey boosted Cora, and it’s done wonders for Edith and Marigold, too. But so far the name shared by two members of the Crawley family – the youngest daughter and the firstborn granddaughter – has yet to catch on. Or maybe that’s not quite right. In 2012, a mere sixteen girls were given the name. By 2014, there were 86 newborn Sybils in the US. Still, this tailored name for girls remains nicely rare, and strikes an interesting note between the vintage and the modern.

Tamar – If Harper and Rowan and Esther are big tailored names for girls, how can Tamar be so neglected? An Old Testament name meaning palm tree, Tamar is big in Israel, and sounds like many an on-trend name. A similar possibility is Tamsin, originally a feminine form of Thomas. Could it be that we’re turned off by possible nickname Tammy that we’re bypassing two great Tam- names? Tamar was given to under 100 girls in 2014, and Tamsin, a mere 20.

Wallis – Okay, maybe Wallis doesn’t count. Strictly speaking, Wallis Warfield Simpson’s name is a family surname – she was born Bessie Wallis Warfield. But she was famous – infamous – as the Woman He Loved, the American commoner for whom King Edward VIII abdicated the throne of England. But that scandal is in the past, and now Wallis almost feels like the feminine form of Wallace – though both are spellings of the same Scottish surname. I’ve heard it on a few girls over the years, including one of the daughters of actor Anthony Edwards. (Edwards is also the father of Esme and Poppy, and son Bailey, with wife Jeanine Lobell, the found of Stila Cosmetics.) It’s uses like this that make me think Wallis fits with tailored names for girls – though perhaps not perfectly.

What are your favorite tailored names for girls? Which names are missing from this list?