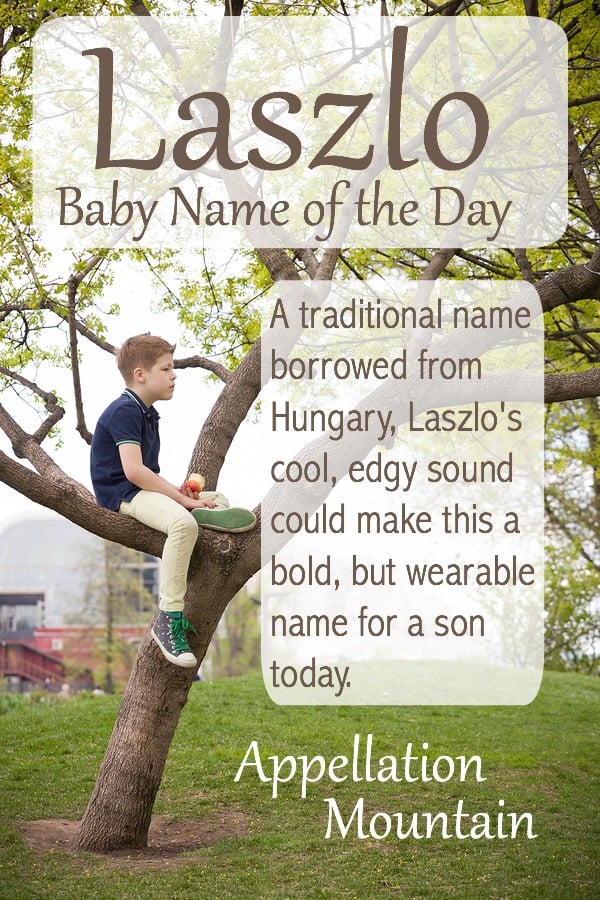 Laszlo combines the letter ‘z’ and a final ‘o’. Could any boy name be cooler?

Thanks to Kelleita for suggesting our Baby Name of the Day.

An entire family of names remains almost unheard in English. The Latin Ladislas or Ladislaus encompasses several Slavic names: the Russian Vladislav, the Polish Wladyslaw, and the Hungarian László.

The name traces back to Slavic elements meaning ruler and glory. Plenty of names ending in -slav boast long histories of use in Eastern Europe.

Hungarian is different from most other European languages. It comes from a a language first spoken near the Ural Mountains. Linguistic cousins include Finnish.

No surprise, then, that Laszlo doesn’t look quite like many other names.

Most English speakers will pronounce it LAZ lo, though it sounds a little different in Hungarian.

Back in 1077, the future saint Laszlo became king of Hungary. He ended civil war and expanded his kingdom into neighboring Croatia.

He’s considered a national hero in Hungary. One legend tells that, during a battle, he spied the enemy kidnapping a Hungarian maiden. Despite being wounded, Laszlo gave chase, and with the maiden’s help, killer her captor and set the young woman free.

It is a Top Twenty staple in Hungary today.

If you recognize this name, credit Hollywood.

First came 1942’s Casablanca, and Czech resistance leader Victor Laszlo. If you recall, Ilsa met Rick in Paris. She believed Victor, her husband, had died. Many years later, Isla and Rick meet again in Morocco. While Victor is the noble figure to Rick’s opportunistic cynic, Rick ultimately saves the day.

Then game an early Val Kilmer film. 1985’s Real Genius cast Kilmer as Chris, a brilliant slacker student at Pacific Tech. The school is home to legendary genius Lazlo Hollyfield. They work together to ensure that Hollyfield’s work is not used to create weapons.

In 1992, Michael Ondaatje gave the name to the main character in his novel, The English Patient. He wasn’t English, but a Hungarian explorer. He’s been horribly burned and rescued from Egypt. He’s recovering in a crumbling Italian villa during World War II, where his life story is revealed in flashbacks.

Ondaatje based the character on a real life explorer with the same name. The real explorer lived long after World War II, eventually returning to Egypt to continue his research.

The dashing Ralph Fiennes played the character in the 1996 movie adaptation, earning an Oscar nomination.

Laszlo also occurs as a surname, worn by a notable writer as well as a painter.

Rocker Pete Wentz named his named his younger son Saint Lazslo in 2014. That’s not a typo – Wentz and girlfriend Meagan Camper reversed the ‘z’ and the ‘s’ for their son’s middle name.

Laszlo: By the Numbers

Despite a mix of uses making the name more familiar in recent years, Laszlo remains rare. 23 boys received the name in 2015; that’s down slightly from a peak of 36 in 2013.

Other forms of the name haven’t fared any better. In 2015, I counted 6 boys named Lazlo, and not enough of any other form to register.

Overall, that makes this name an appealing option for parents seeking something traditional, but offbeat. If you’re heartbroken that Otto is back in the mainstream, perhaps Laszlo is the name for you.

What do you think of this one? Does the spelling seem difficult?

This post was originally published on February 3, 2010. It was substantially revised and re-posted on September 19, 2016.