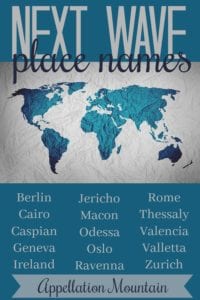 Brooklyn and Savannah both chart in the girls’ Top 100. London ranks for boys and girls. Aspen and Kingston continue to climb. Hudson and Camden are big for boys. So what’s next?

Chicago made headlines as the newest daughter for Kim Kardashian and Kanye West, but somehow that seems unlikely to catch on.

And many place names feel more like traditional given names: Charlotte and Adelaide, Florence and Georgia.

In order to be considered one of the next wave place names, it has to immediately signal that it’s geographic – as well as at least slightly name-like.

These choices could work. They’re tied to the map, but sound like stylish names of our moment, too.

Jeremy Renner welcomed daughter Ava Berlin in 2013, but the German city already saw sparing use as a given name as far back as the nineteenth century. That predates the success of American composer Irving Berlin – born Israel Beilin, speaking of place names. While the name almost certainly derives from a description of the area, folk etymology links it to bär – bear. Since a bear appears on the city’s coat of arms, and has since at least the 1200s, that’s history aplenty. (More on Berlin and bears here.) We do like a bear association with a child’s name, from Theodore to just plain Bear. So that puts this on my list of next wave place names.

With a bright -o ending, Cairo sounds like a modern child’s name. It may feel like a heritage choice for families with roots in Africa, too. Model Beverly Peele gave it to her daughter all the way back in 1993, and now Cairo is following in mom’s footsteps. The mother-daughter duo appeared on an episode of reality TV series Growing Up Supermodel. But the numbers give Cairo to the boys, with 266 born in 2016 (versus just 16 girls). Blac Chyna’s firstborn is King Cairo, and Cairo Santos plays football for the Chicago Bears. Another possibility from the same place: Egypt, as in Alicia Keys’ son.

Caspian counts as literary, thanks to CS Lewis, but also the name of the world’s largest enclosed inland body of water. (Some call it a lake.) The name comes from the Caspi, an ancient tribe who lived in the region. It borders both Iran and Russia, and it’s known for everything from caviar to oil production. CS Lewis borrowed the name for his rightful King of Narnia. Neve Campbell gave the name to her son, and she’s not alone. Following the release of a 2008 feature film based on Lewis’ story, Caspian has increased in use sixfold. For now, it’s still outside of the US Top 1000, but seems like a promising place name.

The Swiss city of Geneva sounds like a fresh, new idea. But it appeared in the US Top 1000 every year from 1880 into 1995. Former First Lady Mamie Eisenhower was born Mamie Geneva Doud. It probably comes from a word meaning estuary; forms of Geneva have been in use since the first century BC. As a name, it could also connect to the French Genevieve or the Italian Ginevra, which relates to both Juniper and Guinevere. Origins and history aside, today it’s a rare given name that brings to mind a particularly lovely city. Another bonus: thanks to the international Geneva Conventions, it’s known as the City of Peace, an appealing meaning for a child’s name.

Irish names have become blockbuster favorites in the US, from Aidan to Molly, Erin to Sean. So how ’bout Ireland itself? Alec Baldin and Kim Basinger chose it for their daughter way back in 1995. Over the last twenty years, it has teetered on the edge of the girls’ US Top 1000 and been used sparingly for boys, too. If you’re worried that Liam is too common and Saoirse too hard to spell, Ireland could be the most obvious of heritage picks – and yet nicely distinctive, too.

The first settlers arrived in the ancient city of Jericho around 9,000 BC. It’s mentioned in the Old Testament story of the Battle of Jericho, so the name has got some serious history. Plenty of places are named for the original, but children? That’s pretty much a late twentieth-century phenomenon. While it’s used for both genders, this one also goes to the boys. 226 newborn boy Jerichos were born in 2016, versus fewer than five girls. Modern Jericho still stands, near the Jordan River, making this a possible place name with history galore and a fresh sound.

We’re naming our daughters Savannah and our sons Mason. So why not Macon? This Georgia city was named for North Carolina statesman Nathaniel Macon, since so many earlier settlers came south from the neighboring state. Nathaniel’s surname came from the French, a common place name possibly derived from their word for mason. So it all comes full circle. Fictional Macons have appeared in novels by Anne Tyler and Toni Morrison. Writer Sarah Dessen gave the name to a character in her 1996 novel That Summer. It became a movie in 2003, starring Mandy Moore. (Macon becomes her boyfriend.) As of 2016, it remained very much under-the-radar, with just 32 boys receiving the name that year. It seems like an ideal stands-out/fits-in choice for a son, especially if your family has ties to Georgia.

We love O names, like Olivia and Owen. And -essa has a long history as a girls’ name ending. So why not Odessa? It brings to mind plenty of places. There’s the original, the Ukrainian city on the Black Sea. Catherine the Great named it for the Greek city of Odessos. Beyond the Ukraine, more than a dozen American towns and townships use the name. At least some, like Odessa, Texas, were inspired directly by the original. It’s also considered a feminine form of Odysseus, as in The Odyssey, which makes lends it a romantic, adventurous vibe. Despite all these positives, Odessa hasn’t appeared in the US Top 1000 since the 1950s.

A handful of boys have been named Oslo in the last decade or so as parents’ search for next wave place names has intensified. The sound appeals, of course, just like Milo, Arlo, and so many other -o ending boy names. It helps that Oslo has a genuinely appealing meaning: the meadow beneath the ridge. And it’s a modern European capital and a pretty one, too. If you happen to be of Norwegian heritage, Oslo feels like an obvious pick. But even without that connection, this name succeeds on sound. Another possible boost? French animated television series Skyland, Le Nouveau Monde includes a character called Oslo. He’s a bad guy, but hey … it hasn’t hurt Kylo.

Ravenna looks like an elaboration of raven, which would make it a bird name. But it’s actually an northern Italian city, once the capital of the medieval Ostrogothic Kingdom. The name’s origins are unclear, and the city isn’t nearly as well known as Venice or Florence or Rome. But it’s a rich and lovely sound, feminine but fierce. The similarity to Raven helps, as does the sharp ‘v’ sound. Lord Byron lived in the city in the early 1800s and wrote about it in a memoir; Oscar Wilde gave the name to a poem in 1878. If your heritage is Italian, it might be an alternative to Francesca or Giovanna. But lots of Italian place names are rich with potential: Verona, Sicily, and even Italy itself.

While we’re visiting Italy, how about Rome? The Eternal City may take its name from legendary co-founder Romulus, a name that’s seen some use. Roman describes the city’s residents and ranks in the current US Top 100 for boys. But just Rome most clearly nods to the oft-visited place. It might read as slightly religious, thanks to the presence of the Vatican (technically an independent country, but sometimes referred to simply as “Rome”), but I don’t think that’s the strongest association. Actor Rome Flynn is best known for his turn on The Bold and the Beautiful; for another soap opera tie, Young and the Restless alum Jason Thompson named his daughter Rome Coco in September 2017. 142 boys and 16 girls were given the name last year – a new high, but still nicely under the radar.

Nine girls were named Thessaly last year, just enough to make this Greek place name seem like a possibility for daring namers. Homer called it Aeolus, but Thessaly has a long history as a place name, too. It’s still the name of a region in modern Greece today. Now here’s where it gets fun: Neil Gaiman gave the name to a character who happens to be a witch, because folklore long associated the area with magic and spell-casting. Alexander the Great had a half sister named Thessalonike – celebrating a Macedonian victory, one that made their dad ruler of Thessaly as well as Macedon. Thessalia also applies to a species of butterflies. All of this makes Thessaly rare, but intriguing.

Romantic, elaborate Valencia refers to a Spanish city founded by the Romans way back in 138 BC. The Romans called it Valentia – strength. Today it brings to mind oranges, but also more than one song. A 1920s song celebrates the city; The Decembrists “O! Valencia” gives the name to a modern-day Juliet character. It fits right in with the long names for girls so many parents favor today. While nicknames abound, it wears well in full, too. Girls are named Valentina and Valeria, but Valencia? Despite seeing some use over the years, and appearing in the Top 1000 as recently as 1994, Valencia was given to just 112 girls last year. That’s enough to put it on the list of next wave place names.

Elaborate V names seem rich with potential. Besides Valencia, I’ve also mentioned Verona, and there’s Vienna, too. But my heart belongs to Valletta. It’s the capital of Malta, a tiny Mediterranean nation, named for Jean de Vallette. Back in 1565, Vallette held off a siege by the Ottomans, winning a celebrated victory. Vallette’s surname ultimately comes from the Latin vallis – valley, which makes this a subtle place name. Model-actor Amber Valletta also makes it familiar. If Valencia has more history than you’d expect, Valletta has less – in the US, it’s never been given to even five girls in a single year.

Geneva, Switzerland appears earlier on the list. How about Zurich? It started out as the Roman settlement of Turicum circa 15 BC, and evolved from there. Today, it’s the biggest city in all of Switzerland. Fun fact: Zurich sits in the German-speaking part of the country, and in some Swiss dialects, the name sounds more like Zuri. But in the US, expect to hear it with the ‘k’ sound at the end. It’s familiar as a place, but almost completely unknown as a given name. Just 5 boys were named Zurich in 2016. But with that cool letter Z, there’s something about this that feels promising.

Those are my picks for next wave place names. What would you add? Are there any you might consider for a child? Updated on January 23, 2023