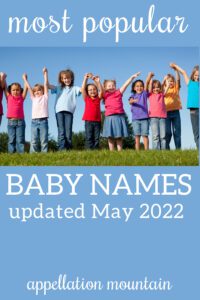 NOTE: This post is under revision. Please check back for updates on May 6, 2022.

The most popular baby names in the US have been updated!

On May 6, 2022 the US Social Security Administration released data for calendar year 2021.

Mason and Ethan leave the Top Ten, and Henry and Alexander – the former #11 and #12 names – take their spots.

An Irish short form of William, upbeat and charming Liam has long stood on its own.

A former #1 name, this Biblical choice remains a strong favorite.

An Old Testament name following Noah up the charts.

An enduring classic, with nicknames from Billy to Will.

Another name that’s never out of style.

An choice with history to spare.

Henry reminds us that baby names can be rock solid classic and subject to trends. This traditional choice for a son has been gaining for years, and is now back among the most popular baby names in the US.

This former Top Ten favorite never fell far, but it’s back again. Chance are that Alexander Hamilton and his smash-hit musical biopic deserves credit. After all, Schuyler sister names Eliza and Angelica gained, too.

A few of the girls’ names swapped places, but it’s the same set of ten as last year.

With that same middle V as Olivia, but a glamorous, Hollywood vibe.

A powerfully popular choice with an irresistible meaning: wisdom.

A cousin to Emily and Emma, Amelia continues to soar.

A mini name that’s long on style, Mia remains in the Top Ten.

Tailored and elegant, Evelyn remains the most popular of the Ev names for girls.

Literary surname name Harper remains the most popular of surname names for girls, but names like Emery, Kinsley, and Quin are also popular picks.

Everly is the new Mackenize: a stylish surname name for our daughters with multiple, equally appealing spelling options. In every spelling, this name has been among the fastest-rising choices for girls in recent years. And now both Everly and Everleigh are Top 100 favorites.

A Hawaiian name, Leilani and other -lani ending choices have been trending in recent years. But this Top 100 debut is something new.

Also noteworthy: Gianna rose all the way to #12 from #79. That’s a stratospheric leap!

Not only did Brooks make the Top 100 – at last! – but it brings with it a rising tide of surname boy names ending with s. Hayes, Wells, and Banks were among those names making significant gains this year.

A long-time favorite, teetering on the edge of the Top 100 forever, Silas finally tipped in this year.

More analysis of the most popular baby names in the US to come!