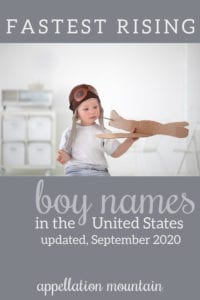 There’s more than one way to define the fastest rising boy names in the US.

Most often, we look at rank. Archie jumped over 300 spots; Kenzo and Saint, by more than 100 each.

But it’s sometimes more interesting to look at gains in the actual number of babies given a particular name. Archie’s big leap represents just 172 extra births over the prior year. That’s actually not a big number at all.

For our purposes, this list only looks at names previously appearing in the Top 1000, not newcomers. They have their own list here.

So let’s flip the way we rank the fastest rising boy names, and see if we can spot any trends.

In the UK, nickname names dominate. Charlie, Freddie, Alfie, and yes, Theo all rank higher than their formal counterparts. That’s less true in the US, but some parents do embrace the casual-cool vibe with short boy names. Theodore is buttoned-up, but Theo? The vibrant ‘o’ ending continues to be a major style story, and a driver of this name’s popularity. Theo now ranks #195 in the US.

Quirky and cool, literary and Biblical, parents have been wild about Ezra for the last few years. While it’s slowed down some, that’s partially because the name now ranks solidly in the Top 100, now at a new all-time high of #49. With traditional roots and a razory, modern sound, it’s easy to imagine Ezra climbing higher still.

Blue jean Levi succeeds for many of the same reasons that Ezra has fared so well. It’s a cool name for a boy, capable and tough. But it’s also a traditional, Biblical pick – after all, the jeans were named after Levi Strauss. It’s been a given name for millennia. The letter V is a major driver of popularity on the girls’ side, and it’s a factor for boys, too. It’s just one more reason why Levi has now reached #25 in the US.

Kyler looks like a Kyle-Tyler mash-up, and while it’s possible to find the surname listed a few places, chances are this one is pure invention. Of course, Kyle and Tyler were 90s favorites, so what explains a big bump in Kyler’s use in 2019? Chances are that’s down to Cobra Kai, a YouTube-turned-Netflix series that picks up where the original Karate Kid franchise left off. He’s a bad guy, but we all know that doesn’t prevent parents from noticing a name. The name now stands at #236.

Adriel comes from the Old Testament, and it carries an intriguing meaning: flock of God. It sounds like a successor to popular choices Adrian and Gabriel, and perhaps that’s true. At #185, it’s more popular than ever before. The name appears in a comic book series, now turned Netflix series, Warrior Nun. But since the series debuted in 2020, that seems an unlikely reason for the name’s rise. Still, it makes it one to watch for the future.

We like to talk about how John is no longer the top name in the US, and that’s true. But names related to John continue to be everywhere, including among the fastest rising boy names. For ages, Jackson has been the stand-out star in this name family. But Jack – the quintessential action hero name, worn by heroes from Sparrow to Skellington, Bauer to Reacher, continues to climb as well. It now ranks #19. That’s the name’s highest spot since the 1930s.

It’s the name of an entire empire, a name that feels powerful and bold. But Roman also makes for a mainstream choice, a name that’s graduated from soap opera character (we met Roman Brady on One Life to Live way back in 1981) to go-to staple. After all, Roman has ranked in the US Top 1000 every year since 1900, and several years prior to that, too. It currently sits at #73.

We love a good place name, and Cairo qualifies. Factor in the ‘o’ ending, and this name feels like an obvious candidate for boy names today. Except it’s Kairo with a K that’s white hot right now. Not that Cairo isn’t climbing, too – it is! – but it just barely missed a spot on this list. In fact, Kairo ranks #307 as of 2019, ahead of #344 Cairo.

There’s no mystery behind the big bump in boys named Crew. Chip and Joanna Gaines, of Fixer Upper fame, chose the name for their fifth child, and third son, in June 2018. The Gaines’ family also includes sons Drake and Duke, and daughters Ella Rose and Emmie Kay. Fans speculated that the new baby’s name would have to fit their pattern – and it both does and doesn’t, right? One-part wrecking crew, one-part preppy rowing sport, Crew is up to #339 in the US – a celebrity baby fueled leap.

A name straight out of legend and literature, we all know that Arthur was meant to rule – whether it’s Camelot or Atlantis. This long-time Top 100 classic has spent years in style limbo, but lately it’s following Theodore and Henry back up the charts. A handful of celebrities have chosen the name for their children, including Selma Blair. As of 2019, Arthur ranked #178, but that’s still a ways from the name’s Top 20 status at the turn of the twentieth century.

We love Miles. And Milo. Mylo debuted in the US Top 1000 this year. So no surprise that Myles is rocketing up the popularity charts. Some see it as the more authentic spelling, since they might remember Captain Myles Standish of the Mayflower and Plymouth Colony from their history books. (It’s actually the Germanic Milo that came first, brought by the Normans to England with the ‘s’ tacked on.) As of 2019, Myles is up to #144, still behind Miles at #75.

The Old Testament prophet’s name comes with a great meaning: God will strengthen. It also has one of best built-in nicknames: Zeke. A handful of pop culture uses have boosted the name, including characters on Mayans M.C. and The Walking Dead. But parents need little encouragement to embrace a name that’s so very on-trend, following Biblical boys like Elijah and Ezra straight up the popularity charts. Ezekiel now ranks #71.

Here’s why it makes so much sense to look at the fastest rising boy names: Liam makes the list. Yup, Liam the Irish nickname name for William that’s held the #1 spot since 2017. A chart-topping name isn’t always climbing. Sometimes it’s actually falling in use – but nothing else has gained enough to replace it. That’s not the case with Liam. Not only is this friendly, upbeat name still the most popular overall, parents continue to choose it in growing numbers.

In Greek myth, Adonis was a young shepherd so beautiful that the goddess Aphrodite loved him. That’s why “an Adonis” is another term for a handsome man. That’s a lot to live up to, but this is the age of epic boy names. Adonis’ recent burst in popularity is thanks to the Rocky movie franchise. In 2015, we met Adonis Creed in Creed. He’s the son of Rocky Balboa’s late rival, Apollo Creed. Rocky trains him. Both Adonis and Creed got a boost from the 2015 movie. A 2018 sequel, Creed II, was especially good for Adonis. The name now comes in at #242.

Country music legend Waylon Jennings was one of the first to answer to the name. He passed away in 2002, but just as we’re still naming our sons Hendrix and Lennon, Waylon seems to fit in the same broad category. But it also succeeds on sound – a two-syllable boy name ending with -n, complete with a bright, long ‘a’ feels like a logical choice in our age of Aiden, Mason, and Grayson. Waylon ranks a very respectable #113.

Luca-with-a-c entered the US Top 100 this year, so no surprise that Luka-with-a-k is rising fast. We love a good Luke name – Luke ranks in the Top 50, with Lucas in the Top Ten. Luca is the Italian version of the name, made famous by a character in The Godfather, as well as plenty of celebrity kids. If you know your Suzanne Vega, you might think of her 1987 folk rock hit by the name. All these years later, Luka comes in at #219, behind #87 Luca.

Maverick has gone mainstream. There, I said it. Once, I thought this name was just too much to live up to. But as it climbed the popularity charts, Maverick became another word name – just a very cool one. Of course, it’s a character name, too. The long-awaited Top Gun sequel is expected in July 2021. It’s titled Top Gun: Maverick after Tom Cruise’s character’s call sign. It now ranks #58, but with the potential blockbuster just around the corner? It could fly even higher.

We love Leo. It’s a name that roars. Leo mixes vintage style with a certain ferocity. And, of course, it ends in ‘o’ – a quality that marks many a successful boy name these days. Names like Leonardo, Leonidas, and Leonel also rank in the Top 1000, but none of them rival Leo, which has now reached #40.

Classic Matthew remains just a few spots ahead of romance language Mateo – but probably not for long. The former is falling, while Mateo and Matteo continue to climb. After all, they’re the best of both worlds – plenty traditional, but combined with the bright ‘o’ ending we love so much. Mateo is generally the Spanish spelling, making it a white hot crossover favorite, too. Mateo now ranks #26, right behind #23 Matthew.

It doesn’t always seem quite right, but classic names are subject to trends, just like, well, trendy ones. Classic Theodore fits right in with chart-toppers like Henry and William and James, but it has long been just a little bit different, too. Most of these newborn Theodores will likely answer to another of the fastest rising boy names, Theo. But some could be Teddy, too. Theodore now stands at #36.

One of the biggest changes over the last few decades in baby naming? We no longer require boy names to avoid vowel endings. This list proves that! In particular, -a endings – long reserved for our daughters – are now fully equal opportunity. This is welcome news, and it opens space for names like Luca to join Lucas and Luke near the top of the popularity charts. Luca recently entered the US Top 100 at #87.

We love big, bold word names. They’re not virtues, exactly. They’re closer to boasts. Naming your child Legend feels like a wish, or maybe a promise, that he’ll lead an extraordinary life. It’s an appealing image, and, of course, a cool sound, too. One more factor: the 2007 Will Smith movie I Am Legend warmed parents to the idea of Legend as a person – though, of course, Smith’s character was actually named Robert. Legend now sits at #150. Of course, the next entry could have something to do with the rise of Legend, too …

Miles Davis made this name cool; John Legend and Chrissy Teigen lit it on fire. They welcomed son Miles Theodore was born in May 2018. The couple often shares updates on their children via social media, making Miles and sister Luna household names. One more factor: that ‘s’ ending. Miles was one of the earliest s-ending boy names to catch on, but it’s part of a tidal wave of a trend. Miles now ranks #75.

Are any of the fastest rising boy names on your list of favorites? Do any surprise you? 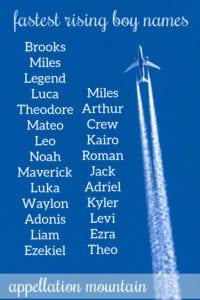