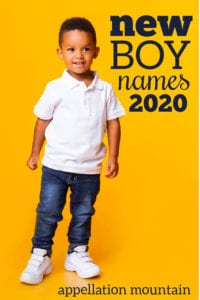 50 new boy names returned or debuted in the US Top 1000 for the calendar year 2020. After much waiting, the US Social Security Administration released all the data on September 4th – just in time for Labor Day!

How does 50 new boy names compare to years past?

It looks a lot like Ayan – coming up a bit further on this list – but it likely has separate origins. In Persian, it means long night; other origins and meanings are possible, too.

A Scottish spin on Alexander, Alistair fits with names like Lachlan, Callum, Archie, and Lennox that are enjoying a burst of popularity now.

The name of a fourth century theologian, Ambrose – appropriately – comes from a Greek word meaning immortal. It was relatively common in the US until the middle of the twentieth century, but this name might be revival-ready.

Amias and Amyas appear in history and literature over the ages. There’s the delightfully named Sir Amyas Bampfylde, Member of Parliament in sixteenth century England. It might be connected to Amis and Ames, which potentially lends it the meaning friend, from the Latin amicus. It fits right in with so many s-ending names for boys.

A figure from Greek myth, the father of future kings, Atreus succeeds for two reasons. First, it shares the ‘s’ ending of so many favorite names, including ancients like Julius. But it also boasts a great meaning: fearless.

It might be a Bengali name meaning path, an Arabic name meaning era, or a Sanskrit name referring to the solstice. All of the meanings have appeal.

This spelling appears in the King James version of the Bible. It’s also used for minor characters in a great many fandoms, including a Star Wars novel. It succeeds on sound and style, but, as with Azrael, not every association is positive.

A handful of Old Testament figures answered to Azriel, but Azrael is a little different. Many religious traditions consider Azrael the many-winged Angel of Death. The name has appeared in sparing use in comics and other works of fiction over the years, but this is the name’s debut in the US Top 1000.

An s-ending boy name in the key of Brooks, Banks was definitely a name to watch heading into 2020. It’s preppy and polished, but with just enough edge to put Banks on the same playground as Wilder.

When Bellamy debuted in the girls’ Top 1000, many noted that the most prominent Bellamy of the moment was male. The 100 – a sci fi drama – gave us a brother and sister named Bellamy and Octavia, who struggle to survive in a post-apocalyptic landscape. Octavia also rocketed into the rankings on the strength of the series. It seems fitting that Bellamy is now on the boys’ list, too.

Fiery Blaze has charted in the Top 1000 for a while, consistently more popular than saintly, philosophical Blaise. But now Blaise is back – again – in the rankings.

A handsome Irish surname name, Callahan benefits from two things. First, it matches up with longer surname names, like Sullivan, that we’ve embraced. Just as importantly, it shortens to casual and cool nickname Cal.

Callum – spelled with two Ls – is more popular in the US, but Calum – one L – is closer to the Scottish original. It comes from Columba, a Late Latin name meaning dove. Saint Columba – or Callum or Calum – is credited with converting Scotland to Christianity.

A Colter could be someone who looked after horses. Or maybe someone who sewed quilts. And some German Kolters made plows. It’s a surname name, a successor to favorites like Colton and Ryker, too.

It means constant in Sanskrit, and refers to a pole star. In folklore, Dhruv is a prince, an admirable figure both spiritually and as a ruler.

It looks like Dylan and Dillon, and indeed, it’s usually a variation of the more popular names. But lately Dilan is climbing, perhaps because it’s the preferred spelling for many Spanish speakers.

Ethan returned to the US Top Ten this year, and Eithan – a spelling that looks more like the Hebrew Eitan – debuted in the US Top 1000.

A well-used name in the Bible, Eliel debuted at an impressive #664, behind only Ermias. It means “my God is my God.” Famous Finnish architect Eliel Saarinen is one notable figure. Today, it likely appeals to modern parents seeking a formal name for Eli.

We name our babies King, Duke, and Messiah, so why not Emir? It’s a Bosnian form of Arabic name “prince.”

A sky high debuted, Ermias makes the charts thanks to the tragic death of a musician. The world knew him as Nipsey Hussle, but he was born Ermias Joseph Asghedom. Since his dad immigrated from Eritrea, Ermias has roots in an African language. It appears to mean “God will uplift.”

A surname name ending with R, it’s easy to imagine Foster fitting right in with Hunter and Carter. The name’s meaning – to nurture – is a positive one, too.

An Old Testament name with an appealing meaning: he shines. In Spanish, it sounds like hi-air, almost – but not quite – two syllables. In American English, it might sound more like the first syllable of Jared.

It looks like lots of existing names. There’s the Swahili Bakari, meaning hopeful; in Shone, Dakarai means rejoice. But Jakari appears to be invented, merging the letter J American parents favor with those traditional roots.

A simplified spelling of Giovanni, this is yet another form of former #1 name John.

If Kenny looks like an unusual comeback name, that’s because it is. And it isn’t, actually, a comeback – not precisely. The name has charted in the US Top 1000 since 1929. It slipped out – briefly – in 2018, only to return in 2019. Names sometimes hover on the edge of the rankings for years, either as a part of a slide towards true obscurity, or while waiting for a real revival. It’s too soon to say which will be true for Kenny.

A handsome Hindi name meaning “grace of God,” Kiaan has a slightly different pronunciation for native speakers. Americans tend to say it just like Kian, a nicely international choice with multiple possible origins and pronunciations.

The “colt” sound won’t quit. Colter made this list, as does Kolten. St. Louis Cardinals’ second baseman Kolten Wong might have influenced parents.

At first glance, this looks like a Kyle-Julian mash-up – and that doesn’t quite make sense. But Kylian is the French form of update Irish name Killian, which was boosted from fairytale television drama Once. Famous footballer Kylian Mbappé put his given name on parents’ radar. It also sidesteps the awkward first syllable of Killian, and introduces possible nickname Ky.

Take the storied city of Cairo, mix in a healthy dose of Star Wars redeemed villain Kylo Ren, and you’ll arrive at Kyro. In some ways, it looks slightly more name-like … but it also takes a minute to work out the pronunciation.

Legacy recently debuted in the girls’ Top 1000, and now this bold word name has entered the boys’ charts, too. If you love epic choices like Maverick and Legend, Legacy might appeal, too.

A mini name in the key of Max, Jack, and Gus, Mac follows so many vintage boy names into the Top 1000. One more factor: rapper Mac Miller – born Malcolm McCormick – died in late 2018.

Either a creative re-spelling of Malachi, or possibly one closer to the Hebrew original, Malakhi shares the same meaning: my messenger. With Malachi at #161, and Malakai at #313, it’s not surprising to see another spelling emerge.

Like Kenny, Marquis isn’t back as much as it continues to teeter-totter at the edge of the popularity charts. It started to rise during the age of Mark, a Top Ten pick in the 1950s and 60s. But Marquis – pronounced mar-kee – is a noble title, somewhere below a Duke, though such things vary over time and country.

A spin on popular Milo, possibly influenced by Myles, as well as Kylo.

A form of Nicholas, the name’s surge in popularity might be due to The Vampire Diaries, as well as spin-off, The Originals. He’s normally referred to as Klaus, but his full name is heard, too. He’s a vampire-werewolf hybrid who starts out as a baddie, but emerges as a hero.

With Remy at #423, the Remi spelling is making its way up the charts, too. Surname name Remington has leapt to #227 for boys, a new high.

Robin started out as a nickname for Robert, eventually became a bird name, and a feminine form, too. But Robin remained at least slightly masculine, thanks to Batman’s sidekick, Robin, and plenty of men by the name throughout history. The most famous, of course, is Robin Hood. Taron Edgerton starred in a re-telling of the legend in 2018, possibly helping to boost the name back into the spotlight for boys.

We’ve been naming our sons Roman for ages. Now Rome, the internal city, joins place names like Cairo in the rankings.

Salem debuted for girls and boys alike this year, a place name with an appealing meaning and deep roots.

In Spanish, todos los santos means “all Saints,” as in All Saints’ Day, November 1st. It’s heard as part of some given names – for example, Spanish princess Leonor is Leonor de Todos los Santos de Borbón y Ortiz. It’s shortened over time to just Santos. Once again, it’s a name with a long history of use in the US, but it briefly left the rankings in 2018.

A South African name with a charming meaning – laugh. The boost is thanks to a young character in the 2017 novel/2018 movie The Hate U Give.

A word name that’s been in the back of parents’ minds ever since George Costanza suggested it on an episode of Seinfeld way back in 1996, Seven finally made the Top 1000.

An Old Testament name, long used in other languages. English speakers tend to prefer the related Simon. But Simeon fits with Julian, Caspian, and so many longer names for boys.

Tru – not Truman or Truett or even True – tipped into the boys’ Top 1000. It owes something to Drew, and something to our love of virtue names, too.

Another name in the key of Max and Gus, possibly bolstered by successful filmmaker Wes Anderson.

This name has dipped in and out of the US Top 1000 over the last decade or so. It’s the Spanish form of Old Testament name Jehudiel.

An Arabic form of John, joining the list of Jack, Ian, Jovanni, and so many other Top 1000 names inspired by that long-time favorite.

A Yiddish form of Israel, meaning God contends. It’s the original name of Jacob in the Old Testament.

A spelling of Zion – a reference to heaven – with the ‘i’ swapped for a ‘y’, just like Mylo.

What are your favorite new boy names? Would you consider any of these for a son?