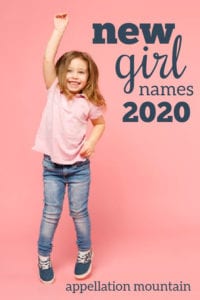 That’s down from 50 last year.

What pushes a new name onto the charts? It’s often a mix. Some names slowly work their way into – or back to – the mainstream. Others represent a spelling variation or a slight twist on an existing favorite. And pop culture propels a few into the spotlight, year after year.

This year’s list represents a mix of all of the above.

Take the L from Layla, and you’ll arrive at Aila. Like many short names, several possible meanings and origins apply: Sanskrit, Turkish, Scottish, Hebrew, and Finnish among them. In some cases, it’s pronounced like Isla. But odds are the name’s appeal is all about our love for liquid, lovely Layla – choose your spelling – and the fast-rising Alaia.

Amora comes form the Latin amor – love, and it ranks #353. Adding the ‘u’ doesn’t change the meaning, though it makes it slightly more French, as in amour.

A Basque name, Ainhoa appears on the map in France. It’s famous for an eighteenth century site where it’s said the Virgin Mary appeared to a shepherd. Though the name’s current use probably has more to do with the small screen – there’s a doctor by the name on Spanish series Centro Médico, among others.

For years, classic Beatrice was stuck in style limbo, while Beatrix – despite the sparky x ending and appeal of Beatrix Potter – languished near obscurity. Beatrice still stands at a modest #562. One possible factor: Peter Rabbit became a live action movie in 2018, and while it’s not true to the original story, it does give us Rose Byrne as the kind-hearted Bea.

We tend to think of Blessing as a Puritan name, but it’s also heard in African countries where English is widely spoken. It’s new to the US Top 1000, a word name in the key of Faith and Grace.

Friends ran from 1994 to 2004. If you’re counting, that means it’s been over 25 years since the world met Phoebe, Ross, Rachel, Monica, Joey, and Chandler. An occupational surname for a candlemaker, Chandler peaked in use for boys and girls alike during the series’ original run. It could fit nicely with so many surname name parents have embraced for our sons and daughters in recent years.

From Margot to Meadow, Willow to Harlow, we’ve been wild for girl names ending with o for some time. No surprise, then, than Cleo is back in the US Top 1000. The name last appeared in 1956. In recent years, it’s been reserved for cats and an infomercial psychic, but lately it sounds fresh, sparky, and a twist on long-time favorite Chloe.

A place name, Denver benefits from the middle ‘v’ that powers popular names, from Everly to Olivia. It also fits with our love of place names. Denver isn’t just an appealing Colorado city, but it offers up all the laid-back, outdoorsy vibe of the late singer John Denver.

Dixie just sneaks in to the US Top 1000. It might be used for parents eager to celebrate Southern roots; it could nod to the number ten; or maybe it’s just another nickname name in the key of Sadie. In 2020, country artists became The Chicks, dropping Dixie from their name, highlighting the challenges of Dixie’s association with the Mason-Dixon line, which once divided slave and free states.

We’ve been waiting for Elodie to make this list forever. A reader favorite, here and elsewhere online, Elodie appeared in the US Top 1000 a few times in the nineteenth century. But now, this French cousin to the saintly name Alodia is back at last. With El names so stylish, Elodie could easily join Eloise, Eliza, Elliana, Ella, and more.

An Irish surname name, Fallon skyrocketed into the US Top 1000 back in the 1980s, thanks to a character on Dynasty. It fits neatly into popular names circa 2020, an alternative to favorites like Rowan. Nora Roberts gave the name to a hero in her Chronicles of the One trilogy, which concluded with The Rise of Magicks in late 2019.

Scandi import Freya ranks #200. Freyja makes the name a little Old Norsier. And while it’s faithful to the original spelling, it doesn’t change the pronunciation.

In Swahili, imani means faith. Imani has been used as a girls’ given name since the 1990s. It’s particularly associated with the annual winter holiday celebration of Kwanzaa. Emani appears to be a twist on the spelling. It’s also spelled Emani in Persian. But it probably makes the list thanks to Emani Asghedom, the young daughter of the late rapper Nipsey Hustle, who died in 2019.

Cora, Nora, and Aurora suggested that other -ora names were ready for revival, and this year, vintage Flora joined them. Besides the on-trend sound, Flora was the Roman goddess of flowers, making this an ecovintage and pan-botanical favorite for parents who can’t choose between Lily and Rose.

Like Blessing, Halo is a straight-up word name with a deeply spiritual vibe. It’s also been a popular video game, a song from Beyonce, and a DC Comics superhero, to name just a few. Plus it fits with girl names ending in o.

A vintage name that’s been slowly building towards a comeback, this was Harriet’s year. Nickname Hattie ranks an even more popular #451.

Indie is short for independent – think indie rock. Or maybe it’s short for Indiana, as in Jones. Either way, it’s a bright name that feels fresh and surprising.

Take Top 100 favorite Paisley, and swap the P for the K of Kaylee and so many other chart-toppers, and you’ll arrive at Kaisley. Kaisley follows Hailey-Paisley mash-up, Haisley, currently ranked #756.

A Swahili name meaning moon, Kamari ranks #486 for boys, but is gaining for girls, too.

Cindy Crawford named her daughter Kaia way back in 2001. At the time, both Kaya and Kaia were brand-new debuts in the US Top 1000. They’ve faltered a bit since, with Kaya falling out in 2018, only to re-appear the following year.

Speaking of names that dip in and out of the rankings, model Kimora Lee graduated from modeling clothing to designing them, and then starring on a reality show series about her life doing all of the above. During her initial burst of fame, the name debuted in the US Top 1000 and had a good run. Now it’s back after a brief absence. Could it be due to the same -ora ending? Or was it the 2019 re-launch of Baby Phat that put her name back in the public eye?

First Louisa returned to the rankings, followed by Louise. Now Luisa, the Spanish and Italian version, joins them.

A short, modern Spanish word name, Luz means light. And while that feels like a twenty-first century innovation, it has plenty of history. It was originally used as a Marian name, as in Neustra Señora de la Luz – Our Lady of Light. It first appeared in the US Top 1000 way back in 1887, and has charted a great many years since.

A newcomer to the Top 1000, Malayah could be a spin on Malia. Or perhaps it’s a just-add-h spelling of Malaya, a Tagalog name meaning independent. Malaya ranks #671; actor Malaya Drew, most recently seen on Mayans MC likely boosted the name.

Payton and Peyton peaked about a decade back. Novel spelling Paityn followed. While it’s never been more popular than either of the two original spellings, it has ranked in the US Top 1000 over the last few years. It dipped out briefly in 2018, but now the name is back.

A delightfully pan-European name, Magdalena is heard in Spanish, Swedish, Bulgarian, Dutch, and, of course, English. Though we’ve traditionally simplified Magdalena as Madeline. It’s teetered on the edge of the US Top 1000 in recent years, but at the moment, it’s back in.

A colorful name that brings to mind all things oceanic, Navy also benefits from the middle v. That makes it a little bit like Avery, Ivy, Ava, and so many other children’s names.

A sweet little nickname name, Nellie could be short for Antonella or Penelope, but it’s most often associated with Helen and Eleanor. In the age of Millie, though, Nellie almost certainly stands on its own.

At long last, this Greek goddess name has arrived in the US Top 1000. It logically follows on the popularity of Penelope.

A place name associated with Massachusetts, Salem comes from a Biblical word meaning peace. It’s as tailored as Harper, as tied to the map as Savannah.

A number name with an unconventional spelling, Sevyn has never ranked in the US Top 1000 – at least, not until now.

Traditional Theodora had made the US Top 1000 most years into the 1950s. But it hasn’t been heard in years. Now it’s back, following Theodore and Thea up the charts. It’s every bit as nickname-rich as Margaret or Katherine.

Another nickname name that stands on its own, Winnie has long been rising in use. But now it’s in the Top 1000, a substitute for Sadie, Millie, or Hattie – or maybe a sister name for any of those choices.

Yara has made waves in recent years, boosted by actor Yara Shahidi. Yaritza uses the popular-itza ending for girls.

An Arabic spelling of long-time favorite Jasmine, it might owe its 2019 burst in popularity to the release of the live action Aladdin in summer 2019.

Actor Zendaya briefly put the name in the US Top 1000, only for it to slip and return again. It means “thankful” in Shona.

Would you consider any of these new girl names 2020? What surprised you most?